How low will the party stoop to divide India on the basis of narrow loyalties?

Whenever there is a clash of two mega-star Bollywood movies, in terms of release dates, fans (read fanatics) go all out on social media with their hate campaigns against each other that should put most political parties to shame.

But sometimes all existing universes collide and we get to see a whole different kind of campaigning for films on social media. Enter: Kailash Vijayvargiya, the national general secretary of BJP, who tweeted on January 21: “Jo Raees desh ka nahi, wo kisi kaam ka nahi. Aur ekj Kaabil deshbhakt ka saath, toh hum sabhi ko dena hi chahiye (The rich who don’t belong to the country are of no use. The able patriot is the one we should all support)”.

This was a rather unsubtle reference to two upcoming Bollywood movies, Raees and Kaabil, starring Shah Rukh Khan and Hrithik Roshan respectively. While neither movie looks promising - the former appearing as of now like an Emraan Hashmi redux and the latter a ripoff of Marvel’s Daredevil – the BJP leader’s stance seems to be motivated not by the quality of the movies, but rather the actors who play protagonists. 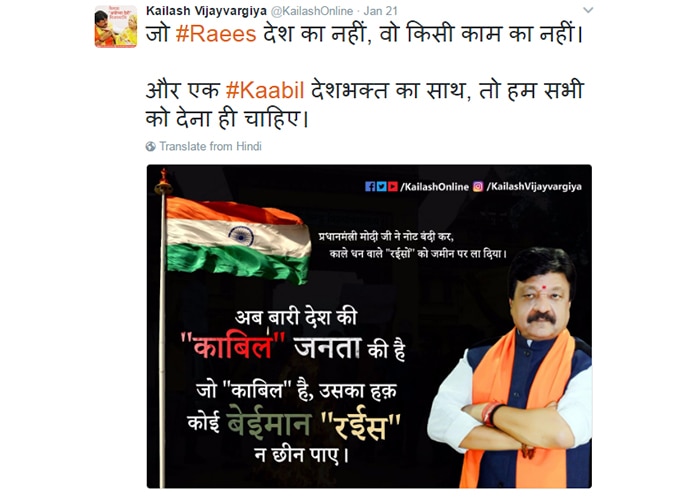 Hindu hardliners have, in the past, deliberately targeted Muslim actors like Shah Rukh Khan, Salman Khan and Aamir Khan, because of their religion. The BJP general secretary himself had attacked Aamir Khan’s recent hit Dangal. Kailash Vijayvargiya had asked his supporters to boycott the movie, because Aamir Khan had spoken about Kiran Rao’s fears of growing religious intolerance in India.

“When anybody says that intolerance is rising in our society, then it makes me a little angry. Then he has to be treated. His treatment is very necessary. One (Shah Rukh Khan) has been treated while other (Aamir) still needs treatment,” Vijayvargiya had said.

The BJP leader’s tweet was not taken too kindly by the social media and he was criticised, as was the party, for trying to incite communal violence and spreading thinly-veiled Islamophobia.

Gen Sec of the Ruling Party of 'World's largest democracy' is openly campaigning against a Bollywood Star.Why?Coz his name is Khan. https://t.co/c7RcEefR7w

'Jo raees desh ka nahi, woh kisi kaam ka nahi ' says @KailashOnline . There is nothing to read between the lines

The only positive of this idiocy is free promotion for both films. https://t.co/SBn2fukUpV

BJP National Gen Secy, Kailash Vijayvargiya proves that such BJP leaders are not 'Kaabil' to be part of India's democratic setup. #Raees https://t.co/6lPAtF0k6t

This attack on Shah Rukh Khan comes only weeks after investigative journalist Swati Chaturvedi, in her book I am a Troll, discussed at length about a covert social media cell run by the BJP that manufactures outrage to suit their agenda and narrative. This open attack brings those allegations back on the table. And if it is not an organised machinery, then perhaps the BJP does not exercise enough control over their rogue cadre.

Either way, it would seem that the BJP might be a Raees in terms of mass base, but isn’t at all Kaabil when it comes to restraint.