'Extremism is being ignited by one personality': Kamal Haasan, no holds barred, at India Today Conclave 2018

My politics is a mix of Gandhi, Ambedkar and Periyar, said the Tamil Nadu leader.

Kamal Haasan, who launched his party Makkal Needhi Maiam in February 2018, said he had so far been enjoying the freedom that a democracy offers but not taking up the responsibilities that come with it, and that his foray into politics was to correct that.

Speaking at the India Today Conclave 2018, Haasan said: “For too long, people have neglected politics, thinking there are others to do that job, and the job of citizens is only to cast their vote. I too thought like that. But now I have changed.”

The actor and filmmaker acknowledged that the political parties in Tamil Nadu had begun as champions of Tamil pride, and said he was not against a particular party, but against “crass, mediocre politics, against the status quo”.

Asked to comment on the political figures he has been meeting of late, Haasan said he would continue to fraternise with various leaders because they were “his people”. “My criticism of these leaders will remain, but so will the admiration I once had for them.”

Haasan recently met Dravida Munnetra Kazhagam (DMK) president M Karunanidhi and the party’s working president MK Stalin. When asked if he approved of Stalin taking over as DMK chief, the new politician simply said he was thankful to Karunanidhi for the meeting. 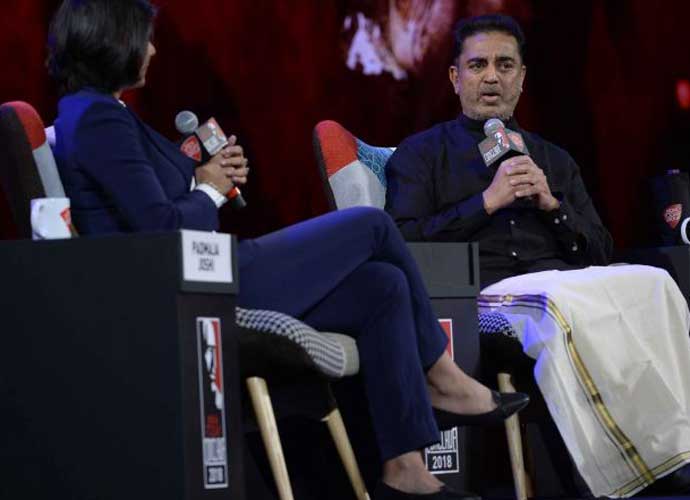 Commenting on Delhi CM Arvind Kejriwal sharing the stage with him on the day his party was launched even as the AAP was involved in the Delhi chief secretary assault row, Haasan said he would look up to Kejriwal “till he is not worthy of it”.

“The incident hadn’t taken place till the point we invited Kejriwal. And anyway, he wasn’t he who did it (assaulted the bureaucrat).”

When asked about his comments of his “colour not being saffron” meant he was against the BJP, Haasan said he was opposed to “everything anti-people”, and not a “particular party or brand name”.

Haasan had faced a lot of flak a few months ago for his remarks on “saffron terror”. On Friday, he clarified that his remarks were made in Tamil, and “extremist” was mistranslated as “terrorist”.

“I had used the word 'teevira', which means extreme. We even say that someone is a teevira fan of something. Does that mean the person is a terrorising fan? No, we just mean that he is a big fan and has extreme feelings. Extremism is displaying your feelings without regard to others’ sentiments. And that is definitely happening today. For example, the Periyar statue being damaged. This extremism is being ignited by one personality,” Haasan said.

Haasan, however, refused to name that “personality”. Instead, he said extremism was often just a diversionary tactic.

“The court had wanted the Cauvery dispute settled by a certain time. That time has elapsed and Tamil Nadu is yet to get its due. I think incidents such as the statue vandalism are an effort to distract people from that. However, this may be my paranoia. This may be just a conspiracy theory. But there is design at play here. There is a hegemonic force here. You want me to name the BJP? I will name the BJP,” Haasan said.

When asked why he chose to launch his own party instead of joining an established organisation with an existing cadre, such as the AIADMK, which is also in need of a leader, Haasan said: “I am hungry and have to eat, but what is available is rotten fruit.”

Haasan has said he would keep a vigil to ensure his party does not become “anti-people” like the others. But he did not rule out poll alliances, without specifying names. “Not entering into alliances is arrogant, despotic. I will align with those I feel have a similar passion, not necessarily similar ideology. I am looking for alliances, not shopping.”

When pressed on the perception that he was “left of centre”, as view given credence by his meeting leaders like Vijayan and Kejriwal, Haasan said: “Once again, ideas need to be similar, not ideology. It is about centrism and equipoise to give people what they want. That is why my party is called Makkal Needhi Maiam – People's Centre For Justice.”

When asked that he was being seen as a force around which the CPM could revive, Haasan referred to philosopher Edward de Bono’s book Po: Beyond Yes and No to say he wanted to be “Po”, the third alternative.

He was also firm on giving up his acting career. “I will look back on my acting career with nostalgia, but will not go back to it. I want to be serious as a social servant, this is what I now want to give my life to. I want to die in service of my state and my nation, in that order.”

Asked about the view that “star worship” may not be enough for him to succeed electorally, Haasan said he was going to the people as just another man who had been taken for granted by the system and wishes to change that.

Questioned on the timing of his political entry and if he had made the move only because he smelt an opportunity in a Tamil Nadu today lacking tall leaders, Haasan said he had been into social service for the past 37 years and had contemplated jumping into politics in 2004-2005 and 2007-08 too.

“My heroes Periyar and Gandhi managed to bring about change without getting into electoral politics. I thought I could too. But now I know I cannot,” he said.

When asked what people could expect from his vision document, he said the guiding principal would be “people’s welfare with their participation”.

“My politics is a hybrid of Gandhi, Periyar and Ambedkar. My belief in solving conflict with dialogue comes from Gandhi, and the anti-caste stance from Ambedkar and Periyar in different ways.”

He also gave a clear message to the DMK and AIADMK: “Change of we will step in. And by step in, yes, I mean form the government.”

Haasan said political untouchables for him would be corrupt politicians, and his party would impede the flourishing corruption and criminality.

On asked if he was too idealistic, he said an ideological political leader was not an impossibility.

On asked about his recent moving tribute to actor Sridevi, he said: “We were cast in romantic roles, but she was like a sister to me.

“When I met her, she was 15. We grew in the same school. We came from the same house. Her loss was like losing a relative.”

On asked what was Sridevi like, he said: “I knew her as child. Don’t know when she grew up. I was the class pupil leader when she started. But she caught up with double promotions. She collected a bag of tricks from various masters, and worked out such permutations and combinations that even the teachers wouldn’t recognise the tricks came from them.”

Dwelling at length upon Sadma, his movie with Sridevi and considered one of the great works of Indian cinema, Haasan, though claiming that politics had taken a toll on his larynx, sang out a few lines from the film’s popular “surmai ankhiyon”.

The new politician wrapped up the session by explaining the significance of the six hands in his party’s symbol: “The six hands go in a virtuous cycle. They stand for the six states in south India, or the six zones of the nation.”