Is there a conspiracy behind attempts to keep Jammu and Kashmir on the boil?

India must take US National Intelligence chief Dan Coats' testimony to Senate earlier this week very seriously. Coats said: "Militant groups supported by Islamabad will continue to take advantage of their safe havens in Pakistan to plan and conduct attacks in India and Afghanistan, including against US interests."

All that Pakistan did after Americans built pressure on it was provide lip service. After a high-level United Nations sanctions team visited Pakistan in January to review progress against banned terror groups/individuals, the district administration of Rawalpindi earlier this week took control of a seminary and four dispensaries run by Hafiz Saeed-linked Jamaat-ud-Dawa. Interestingly, this action came days after Pakistan PM Shahid Khaqan Abbasi made light of the case against Saeed thus: "There is no case registered against Hafiz Saeed in Islamabad and without it, action cannot be initiated against anyone... Action is taken when there is a case registered." In November 2017, he had said India has provided no evidence against Saeed. Pakistan has upped its ante over the past few weeks in choreographing and unleashing terror activities against India. Terror attacks on security camps are continuing unabated in Jammu and Kashmir, prompting Army chief Gen Bipin Rawat and defence minister Nirmala Sitharaman to visit the turbulent state. If this is the situation in chilling winters when mountain passes are closed, what will happen during summers? These are worrying signs indeed.

The Line of Control (LoC) continues to be "Line of No Control". Early in February, three Indian jawans were killed and five persons injured in heavy shelling by Pakistani troops along LoC in Poonch and Rajouri districts of Jammu and Kashmir. This was not a one-off incident but is part of Pakistan's wider nefarious designs. Obviously, this would inevitably witness Indian retaliation as remarked by Hansraj Ahir, minister of state for home affairs, on ceasefire violations by Pakistan: "We will not forgive Pakistan's actions. It will prove to be Pakistan's foolishness and will cost them dearly". The Indian counter will trigger Pakistan's own counter and the cycle will go on. Sheer madness. When will it stop?

The real reason behind the recent Indo-Pak tensions is inevitably politics, especially when both countries are on the cusp of general elections - Pakistan later this year and India by May 2019. This makes the following famous couplet of Rahat Indori all the more relevant today:

Is there a conspiracy behind attempts to keep the Indian state of Jammu and Kashmir on the boil and create the impression that it is ready to embrace Pakistan? The incidents of violence/clashes are becoming frequent which help the vicious anti-India propaganda machinery in Pakistan.

The Pakistanis stunts on Kashmir are all too familiar. Their relentless pursuit to grab the "jewel" from India is almost as old as their country-and full of disappointments for them. They have tried all tricks, direct military attack and regularly pushing in saboteurs and terrorists into Kashmir, to take over the Valley. The consequences have been more disastrous for them than India.

Pakistan today stands condemned in the world as the epicentre of terrorism with a society in which Muslims are fighting against each other. The Pakistani passport is among the least desirable travel documents in the world. Its only steady friend is China, both countries driven by a desire to thwart India's rise.

Indians need not draw any consolation from the plight of the benighted neighbour beyond the Radcliff Line. Its audacity has already pushed it to a stage where UN-designated terrorists openly lead anti-India tirade across the country, and issue frequent "warnings" to India.

The strongest response from New Delhi thus far has been the surgical military strikes across the LoC. Home minister Rajnath Singh says India has shown it can attack its enemies not only on its soil but also in a foreign territory, if need be.

Yet, it's business as usual for Pakistan. Can anyone in his/her senses believe that an irresponsible nation like Pakistan heeds to that kind of "warning"? 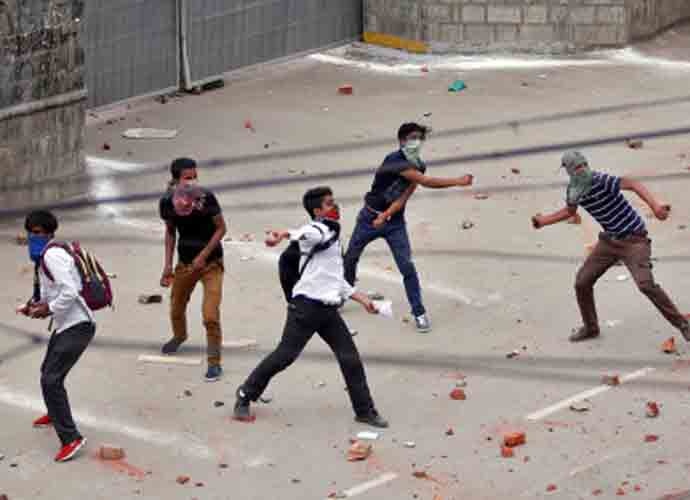 True, military option may not be available, given Pakistan's oft-declared threat to use its nuclear arsenal, but surely there are other options, including diplomatic and economic, that can bring the Rawalpindi-based GHQ Shura and Islamabad-based political leaders whose heart beats to the tune of Hafeez Saeeds and Masood Azhars, to their senses. Why cannot New Delhi use an iron first to deal with them?

A pertinent question in this context: Does the government of India find itself at a disadvantage in dealing with Kashmir with a firm hand because of media criticism? The media criticism largely stems from the local government's inability to find a way to solve the people-related problems. It is also directed at the increasing dependence on security forces.

While the ordinary Kashmiris may not be attracted to the calls for violence by the Pakistani puppets, they are vigorously incited by these very elements to resort to violence against the police and security forces to serve their perverse ends.

The Hurriyat separatists, heavily financed by the Pakistanis, even as they are scared of the ballot box, and militants armed by their Pakistani handlers, are shameless in defending violence and incitement to violence.

Their Pakistani masters provide them help with the sole purpose of destabilising India.

The Indian government has to show more firmness in dealing with the Pakistani bootlickers in Kashmir. Their unpardonable act of driving out the Pandits from Kashmir has to be broadcast again and again.

The self-styled Kashmiri leaders, who accuse the Indian forces of killing "innocent" locals, have blood on their hands for which they have not been made accountable. It is time they are.

The Indian government is often advised to talk to the Kashmiri separatists. This effort has yet again been mounted by former Intelligence Bureau chief, Dineshwar Sharma, the new interlocutor appointed by the Modi government, even though this process makes little sense when the Hindu minority in the state is kept out of the dialogue.

The least that New Delhi can do is to make sure that the Kashmiri Pandits are included in any future "comprehensive" dialogue. That has to be a pre-condition if the Pakistani "sympathisers" have to be included.

Those who advocate talks with the Kashmiris (read pro-Pakistan Kashmiris) will have us believe that the Indian security forces are a trigger happy lot who shoot for pleasure. And, according to them, this situation will

disappear the moment the legal provision that provides immunity to the armed forces from harassment by prosecution is removed from the statute books.

No bigger lie has ever been spoken.

Do the Pakistani and local terrorists who gun down innocent people in Kashmir and elsewhere in India do so out of any pious intention?

An eye-for-an-eye and blood-for-blood may not be a good tactic but you cannot be one-sided in decrying bloodshed.

It is inexplicable that India does not react to the Pakistani propaganda about "atrocities" in Kashmir. India cannot withdraw its forces from the state as long as the threat from Pakistan and their local hirelings exists.

It is bizarre to suggest that India does not need a huge Army presence in Kashmir when the Pakistanis have repeatedly made it clear that they would take Kashmir by force.

India should be telling the world that Pakistan has one of the most brutal armies on the globe, going back to the time of the Bangladesh war and right up to the present times when Balochistan is fully under the Pakistani jackboots.

The Pakistani case on Kashmir rests on religious affinity. Therefore questions that Pakistan has to be asked repeatedly are:

a)How much have you done to make even Muslims of different sects feel safe in your country?

b) Have you forgotten your abdominal record in protecting your Hindu, Sikh, and Christian minorities?

Yet, India being a civilised nation cannot abandon diplomacy and talks. This is perfect poetic summary of Indo-Pak state of affairs:

#Pakistan, #Kashmiri Pandit, #Hurriyat, #Kashmir Unrest
The views and opinions expressed in this article are those of the authors and do not necessarily reflect the official policy or position of DailyO.in or the India Today Group. The writers are solely responsible for any claims arising out of the contents of this article.