Opposition against Bharat Ratna for KM Cariappa is a distraction. The real target is General Bipin Rawat

There is anger among Left-leaning 'intellectuals' against the army chief following his commendation of Major Gogoi.

Farooq Abdullah, the former chief minister of Jammu & Kashmir, likes to make provocative statements. Few take him seriously anymore. His latest remark, "Pakistan-occupied Kashmir (PoK) belongs to Pakistan", can therefore be summarily dismissed - but only after setting the record straight.

Abdullah said India had "betrayed" the people of J&K by not granting the state autonomy and not implementing its promise of holding a plebiscite. (Note: Not a word meanwhile escaped from the loquacious Abdullah during his press interaction on the betrayal by successive J&K governments of 4,00,000 Pandits driven from their homes by Islamists and separatists towards whom the father-son party, the National Conference, leans.)

Abdullah senior, as usual, is muddle-headed over the "promise" of a plebiscite in J&K. Of course, a plebiscite was promised by Jawaharlal Nehru. And of course that promise was formalised in a United Nations resolution in August 1948 even as the India-Pakistan war over Jammu & Kashmir still raged. The resolution said: First, enforce a ceasefire. On December 31, 1948, a ceasefire was duly enforced. The resolution went on to say: Second, all Pakistani troops and other irregular Pakistani fighters must vacate the whole of Jammu & Kashmir.

Was that done? No. Sixty-nine years later, PoK remains under illegal occupation by Pakistan in defiance of the 1948 UN resolution.

Farooq Abdullah knows this perfectly well. And yet every few months, in order to placate the National Conference's communal vote bank, he raises the issue of autonomy, plebiscite and PoK.

He is best ignored but the issues he raises cannot be.

Abdullah's comment contradicts India's position on PoK articulated in an all-party resolution adopted by a Congress-led Parliament in 1994 that PoK is an integral part of India.

Abdullah's scatter-brained remark, however, serves the useful purpose of shining a light on the first war between India and Pakistan in 1947-48 over Jammu & Kashmir spearheaded by Field Marshal KM Cariappa whose "singular distinction", historian Ramachandra Guha recently wrote, "was that he was the first army chief. He was not necessarily the best, either in the field or as a tactician." 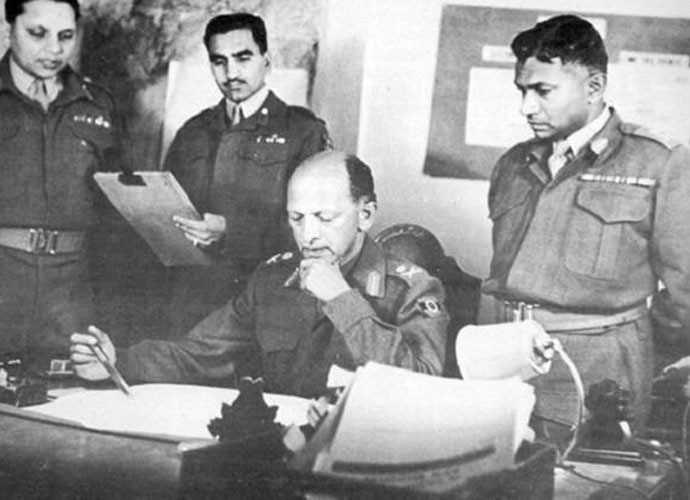 Cariappa was the first Indian army chief, taking over in January 1949 from the last British chief of the Indian army, Lt. General Sir Roy Bucher.

What was Cariappa's role in the long battle in 1947-48 to drive the invading Pakistani army and its tribal forces out of Poonch, Kargil and Uri?

In early-1948, as GOC-in-C of the Western Command, Lt General Cariappa led the force that recaptured Poonch, Kargil, Dras and other areas that the Pakistani army had overrun.

The Indians had been ill-prepared for the war over J&K that erupted weeks after the accession of the state to India. The Pakistani army, helped by irregular tribal fighters, made deep inroads into J&K. General Cariappa appointed Lt General KS Thimayya as GOC of the 19th Division as the war wore on.

By mid-1948, General Cariappa's troops were pushing the Pakistani army back. The tide had turned decisively in India's favour.

Politics now struck. Nehru was "persuaded" by the United States to halt the Indian army's advance. Despite orders from New Delhi to scale back the Indian army's thrust to drive the Pakistani army out of the whole of Jammu & Kashmir, General Cariappa defied the government and continued to push forward, securing Ladakh for India before operations ceased.

Following the UN mandated ceasefire on December 31, 1948, General Cariappa was appointed the first Indian to head the Indian Army. He took over as commander-in-chief of the army from Lt General Sir Roy Bucher on January 15, 1949. The day is celebrated as Army Day. As a young Major, Manekshaw like General Thimayya had served under General Cariappa in the 1947-48 India-Pakistan war. Manekshaw though never saw action on the J&K battlefront and was posted to MO Directorate. Manekshaw had, however, proved himself on the battlefield in Burma in 1942 during World War 2. He was lauded for bravery, but did not, unlike Cariappa, get to command a battalion.

The evidence suggests Guha is wrong. There is a deep but unspoken anger among Left-leaning "intellectuals" (I use the word loosely) against General Bipin Rawat following the army chief's commendation of Major Gogoi in the jeep incident amidst stone pelting in the Valley. Anything that General Rawat says will see bile from these sections of Indian society rise to the surface and curdle, trapped in its sourness.

Also read: Delhi is gasping for breath because AAP government did not use Rs 1,500cr it had to fix the problem

#PoK, #India-Pakistan war, #Bipin Rawat, #KM Cariappa
The views and opinions expressed in this article are those of the authors and do not necessarily reflect the official policy or position of DailyO.in or the India Today Group. The writers are solely responsible for any claims arising out of the contents of this article.