May Day: On a day to honour labour and work, with few jobs at hand, does India's youth even know what to observe?

May Day, Labour Day or International Workers' Day, call it as you may, the first of May is the day observed by the blue-collared around the globe to assert their rights and dignity.

The observance started as a protest campaign to support the eight-hour workday (as opposed to the existing 15 hours per day of work) in 1886 and turned into a day to honour those who died in the protest. On May 1, 1886, activists organized a national strike seeking an eight-hour workday in Chicago's Haymarket Square. The workers united on the streets of Chicago, and the peaceful protest turned violent with a bomb blast and clash between policemen and workers. Nearly 15 people died in the clashes. To honour the workers in the Haymarket riot, the International Socialist Conference declared May 1 would be a day designated for labour, to be called International Workers' Day. The holiday was established at a meeting in 1889 and eventually spread to many parts of the world. 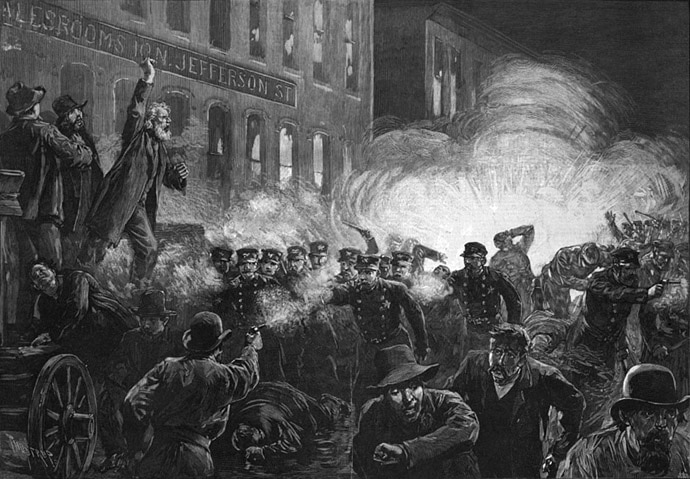 An engraving of the Haymarket Affair in May 1886. (Photo: Wikimedia Commons)

With an estimated 522 million labourers, India observes a public holiday on May 1 every year. The observance, however, did not reach India until 1923.

ON May 1, 1923, a Communist named Singaravelu Chettiar — the leader of the Labour Kisan Party — organised the first May Day observance  in Chennai (then Madras) at two places —  one meeting was held at the beach opposite to the Madras High Court and the other one was held at the Triplicane beach.

The red flag — now synonymous with May Day in India — was also used for the first time at this meeting. The Triumph of Labour statue at Chennai that marks the first Labour Day observed in India. (Photo: Wikimedia Commons)

While it is quite befitting that India marks the day with an official holiday — after all, our labour population of nearly 522 million people, is more than the entire USA population of 327 million — it is time we sat up to take a hard reality check.

May Day essentially marks the dignity of labour. However, with our unemployment rate reportedly at the highest in 45 years, standing at 6.1%, it is time we looked at the right of dignity to work.

Despite India's economy growing rapidly by about 7% annually, uneven growth has meant that there are not enough new jobs to keep pace. The young population makes up a significant share of the unemployed — 18.7% of urban males aged between 15 and 29 are reportedly without work, and a jobless rate reportedly of 27.2% for urban females in the same age group. Members of Centre of Indian Trade Union (CITU) march in a May Day rally in Hyderabad. (Photo: AP) Activists march during a rally led by Indian Federation of Trade Unions to mark May Day. Their banner reads, "Hold high the banner of Marxism, socialism and world peace.” (Photo: AP)

May 1 marks the day of the formation of two Indian states as well — Maharashtra and Gujarat. Besides greeting the fellow countrymen for the formation of these states, it would also behove the Prime Minister to take a hard look at the existing statistics and ensure enough jobs.

Best wishes to the people of Gujarat on Gujarat Diwas. In all spheres, people from the state have made outstanding contributions. Gujaratis are known for their courage, innovation and spirit of enterprise. May Gujarat scale new heights of glory. Jai Jai Garvi Gujarat!

Greetings to my sisters and brothers of Maharashtra on the state’s Foundation Day. Maharashtra is a land of revolutionaries and reformers who have enriched India’s progress. Praying for the continued growth of the state in the times to come. Jai Maharashtra!

Clearly, without jobs and a guarantee of the right to work, in conditions of humane dignity, simply observing "Labour Day" alone does not make much sense.