To what degree can a missed penalty hurt the Argentine?

It was the final of Copa America 2016 between Argentina and Chile. Neither team found the back of the net in regulation time, the game went into penalty shootout.

Argentina’s charismatic captain, Lionel Messi walked up to the penalty spot to take the very first shot at the goal for Argentina. Looking nervous, Messi took the ball from referee Heber Lopes, placed it at the spot and had one look at the net. He took two-three strides back looking all the more uncomfortable and what followed would remain in the collective memories of every Argentinian and Messi fan. Arguably, the greatest footballer in the world had a berserk go at the goal and the shot went well over the goal post and into the crowd. From that moment, Argentina never looked like a side that could bestride match proceedings.

The game finished 4-2 in favour of Chile, and after losing the World Cup final against Germany in 2014, Argentina failed to win yet another major tournament’s final. It was the second consecutive Copa America final loss for the Albicelestes.

Post the final whistle, a dejected Messi was seen sitting alone and looking stunned in the dugout. It looked as if the genius needed solitude to make sense of his miserable situation. And then he broke down. Comparisons were being drawn between him and Diego Maradona ever since his talent sparked a frenzy. Photo: Reuters

The sporting events that night at Metlife Stadium in New Jersey, USA compelled Messi to call it a day. “I have done it all,” he said in his retirement announcement from his duty. But everyone around him and the world knew it was not enough. After all, this man was Argentina’s hope for international dominance. Children in his hometown Rosario grow up dreaming they will follow in his footsteps. Players in Boca Juniors and River Plate crave for the success he has attained at the club level.

Comparisons were being drawn between him and Diego Maradona ever since his talent sparked a frenzy. He had replicated Maradona’s brace (which included the notorious “Hand of God” and “the goal of the century”) from the 1986 World Cup quarterfinals against England in two separate games while playing for FC Barcelona in La Liga.

He had to return, and he did return.

Ghosts of the past?

In Argentina’s first World Cup game, Messi, who has scored 16 penalties for his national side and overall 103 penalties in his career got a chance to score the winner for his team that looked rusty right from the word go. He was up against Iceland’s part-time goalie Hannes Hallodorsson with the game tied at 1-1. 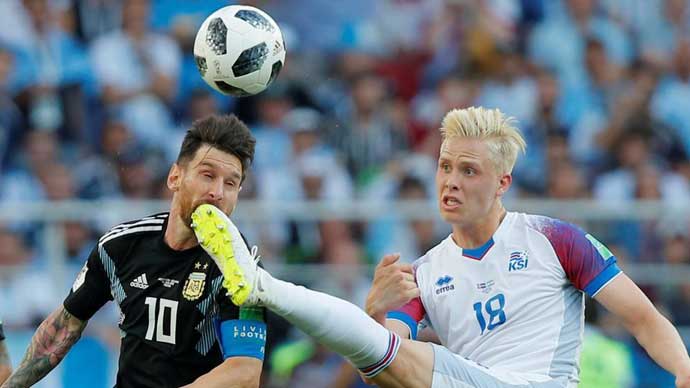 He could have shattered the dreams of World Cup debutant Iceland with one stroke of brilliance. But it was not meant to be. Messi went for the left side of the net, Hallodorsson too leaped in the same direction — the shot at a comfortable height for the goalkeeper was easily saved. Messi was denied. And he looked dejected for the remaining game.

During the entire game the rhythm in the Albicelestes’ play was missing. Their outfield thrusts came to no avail. For the team that relies heavily on Messi, collective movements were missing. Angel Di Maria was struggling.

Messi, particularly, was hardly making any effort to break from the defensive shackles of Iceland. Cramped for room, he looked like a shadow of the player that he is and at times, it seemed as if he had come for a walk in the park. The game ended in a draw. And the missed penalty did hurt Argentina and more so Messi, who went into his shell.

Reports emerged that since the Iceland game, Messi has been elusive, he has rarely spoken to his teammates. He gave team lunch a miss where families of players were present, and instead remained confined to his room, which he shares with Sergio Ageuro.

Clearly, the dark clouds were looming over Messi’s career-long search for international honour. Everyone expected him to come out all guns blazing.

Humiliation at the hands of Croats

Jorge Sampaoli’s team outing against the inspired Croatian side comprising the likes of Ivan Rakitić and Luka Modric was the worst we have seen in the recent times. Before the game, while Argentina’s national anthem was being played, Messi was seen furrowing his eye brows and rubbing his head. He looked anxious and nervous. Argentina, after playing a fighting first half, conceded an absurd goal early in the second half, courtesy Willy Caballero. A horrific blunder.

Caballero carelessly gifted the ball to Ante Rebic in front of the net, who volleyed it over the goalkeeper’s head for a goal. One could sense the humiliation creeping into Argentina’s game soon after — they never looked like a side capable of scoring a goal. Messi saw very less of the ball, the horrors of yet another loss were evident in the team’s body language and the players’ frustration and emotions began to come out in the wrong ways.

Modric’s strike in 80th minute seemed like the last nail in Argentina’s coffin, but there was more to come — Rakitić’s injury time goal made Argentina’s seemingly sloppy defence look like a school team’s. 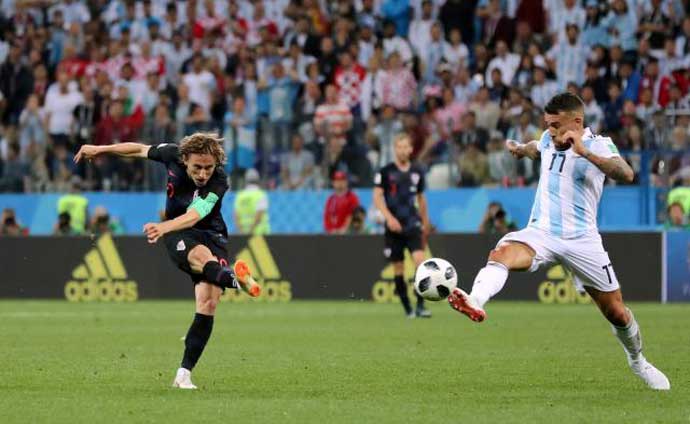 Defenceless against the likes of Luka Modric. Photo: Reuters

At the final whistle, the Albicelestes hastily left the field humiliated — with their heads bowed in shame and their World Cup fate no longer in their hands.

Football is a team game, it would be foolish to put the blame on Messi for last night’s debacle, despite his incredible natural abilities. But then, why does his absence stultify Argentina? We saw in March this year how much Argentina relies on Messi, when during his absence the team was thrashed 6-1 by Spain in Madrid.

His ubiquitous influence over the team is akin to the kind of influence Zinedine Zidane had over the French national team. The only difference being, Messi has failed to inspire his team the way Zidane did in 1998 and 2006 (he was nursing an injury in 2002).

Zidane nearly inspired Les Bleus to their second World Cup title in 2006. And the Frenchman showed the world during the 2006 final why he is the greatest with his display of his nonpareil courage — he chipped the ball into the net while taking a penalty. 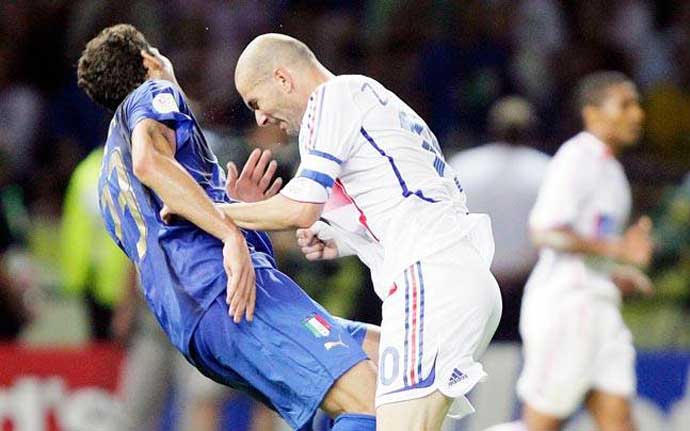 In all fairness, Messi is far from being the player Zidane was. Photo: Reuters

And he was up against none other than Italian goalkeeper Gianluigi Buffon, who was considered one of the best in the world.

In all fairness, Messi is far from being the player Zidane was, yet he can learn alot from the great midfielder — how he built the star-studded French side around him, how he never let the burden of being Zidane get the better of him. And most importantly, the way he communicated and ran the show on the field.

More than Messi, Argentina now relies on fate to advance to the next stage of the tournament. They depend on a favourable result in today’s game between Nigeria and Iceland to reach the last 16 — preferably a victory for the Super Eagles. And then they must beat Nigeria next week.

Before the World Cup, Sampaoli had said, “Messi has a revolver put to his head called the World Cup.” At the moment, it seems obvious that Messi’s knees are shaking due to the “revolver” but the question remains: is his zeal to embellish his illustrious career with the highest honour in football so fragile that he can’t deal with the highest standards expected of him? More than Messi, Argentina now relies on fate to advance to the next stage of the tournament. Photo: Reuters

It is true that every time he plays, he is expected to deliver, score goals from unexpected positions and display sheer brilliance. The amount of pressure under which he has played is unparalleled and of course, missing a penalty and that too in a World Cup game naturally then becomes a sin. But at the highest level, one can expect a player of Messi’s stature to deal with it maturely, which doesn’t seem to be the case so far.

Every great player starts off young, at the peak of physical fitness, full of promise, talent and ambition. There comes a time in his career, when he reaches the top and stays there, doing what he does best — everything looks perfect from up there. And then, age catches up, once past the age of 30, reflexes begin to slow down a bit, one has to work harder to attain physical fitness.

World Cup 2018 is the last chance for Messi — who turns 31 on Sunday — to cement his place among the list of greatest footballers who have laid hands on the most coveted prize in the sport.

But the state of affairs suggests the attainment of this last missing feather in his already decorated cap will be an uphill task.

Post your comment
#Argvscro, #World cup 2018, #FiFA World Cup, #Football
The views and opinions expressed in this article are those of the authors and do not necessarily reflect the official policy or position of DailyO.in or the India Today Group. The writers are solely responsible for any claims arising out of the contents of this article.