'The act itself is never good or bad. It all depends on who does it.'

Major Leetul Gogoi has become a "national" sensation. The Indian Army major caught everybody's attention after tying a man to a Jeep in Kashmir ostensibly as a shield against stone-pelters on April 9.

A video, showing Farooq Ahmad Dar tied to the Army vehicle during polling in the Srinagar Lok Sabha by-election, had triggered a public outcry, prompting the force to institute a probe.

But on Monday (May 22), the Army said Gogoi has been honoured with the Army chief's Commendation Card for "sustained efforts" in counter-insurgency operations.

According to a PTI report, the award for major Gogoi is seen as a backing of the action of the officer belonging to the 53 Rashtriya Rifles even as the Army maintained that a court of inquiry (CoI) into the incident is "under finalisation".

According to Army sources, all factors, including "notable performance" of major Gogoi and "overall emerging indicators" of the court of inquiry, have been "well-considered" while conferring the award on him.

Sources said Gogoi was given the award during Army chief General Bipin Rawat's visit to Jammu and Kashmir last week.

On Tuesday (March 23), the major told the media that Dar was tied to the jeep as he could have been the "ringleader of stone-pelters".

Narrating his side of the story, Gogoi said about 1,200 stone-pelters had surrounded a small group of security personnel at a polling booth in Utligam village of Budgam district on April 9. If he had ordered firing, there could have been at least 12 casualties.

The mob, which included women and children, was threatening to set ablaze the polling booth, he told mediapersons, adding that despite repeated requests on his megaphone, the crowd, refused to budge.

As the stone-pelting increased, he said he ordered his men to take hold of Dar, the man who seemed to be inciting the mob.

"I did this only to save the local people. Had I fired there would have been more than 12 casualties... With this idea I have saved many people's lives,"

Dar, however, has dismissed the army major's allegations. According to this Hindustan Times report, Dar claimed that Gogoi had lied about him being a ringleader of a stone-pelting gang. “The army major is lying to save himself," he was quoted as saying.

“Had I been the ringleader of a stone-pelting mob, why would I go to cast my vote?” asked Dar, adding that the army is there to save people and “not to use common people to shield themselves".

After the atrocity, I expected justice. But that wasn’t done,” he said.

While using human shields and putting civilians in harm’s way to safeguard military vehicles or installations are prohibited under the Geneva Conventions of 1949 (to which India is a signatory), opinions are hugely divided on whether Gogoi's act amounts to rights violation or should be seen as an "act of bravery".

Even some of the retired Army officers have expressed disbelief and regret over the incident and also at the COAS for lauding the errant officer.

But there are many who feel the major did the right thing and deserved the "honour". When we asked our readers if it was right on part of Indian Army to put major Gogoi on TV to brazenly defend his actions and award him on the spot, we got an equally divided response. This is what they had to say: 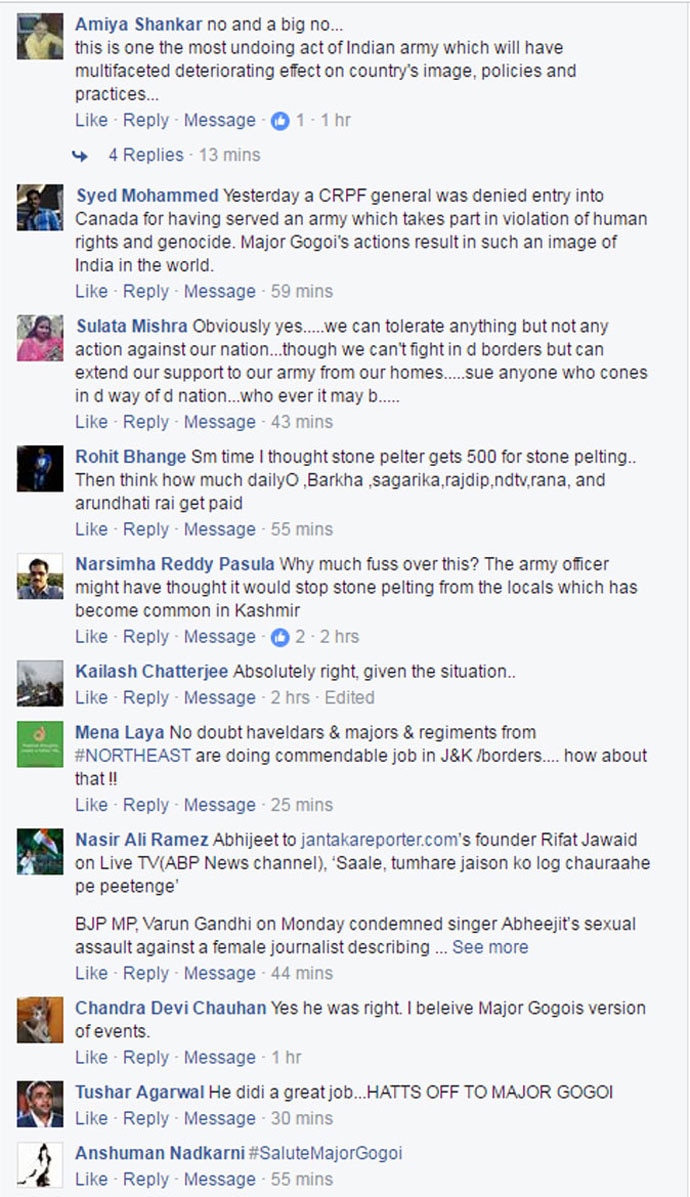 Sujjan Kumar: No, it was not right to have put that man on show describing what happened. They have put that Army officer's life in danger. He should at least have covered his face with a mask. Not a good idea, but the Army has its own think tank and intelligence input which we need to respect.

Adil Khan: I applaud the major for his out-of-box thinking, but I regret he didn't tie a stone-pelter to the jeep but an innocent guy who even went to cast his vote.

Rohit Singh: It was right. His actions were right. His decision to put human shield before his car to save his colleagues from stone-pelters was right. Awarding him was also right.

Shahid Bhai: It shows what they call bravery of Indian Army. It happens all around in India that innocent people are being tortured and they call this cowadice "Bravery". It's a shame.

Sayed M Raza: India rewards terrorists. What other proof of India's terrorism you need besides a civilian strapped to a Jeep and terrorised by Indian Army. Stone-pelting means you are intruding. Leave Kashmir alone.

Veerabhadra Rao: Major Gogoi's action is right. He has done a good job. There is no other option to control the violent mob without using pellet guns or bullets. Every kashmiri should appreciate him for averting any damage to human beings.

Partha Bhattacharyya: Major Gogoi showed exemplary courage and cool when suddenly faced with a conflagratory situation. His decisive action saved dozens of lives and defused the danger of mob violence and riot.

Basil Pereira: No. India is a signatory to the UN resolution to not use human shields. Instead the Army should have shot the violent protestors as an act of self-defence.

John Benjamin: What is patriotism in India? Killing Indian civilians by Indian Army? Is this patriotism? Is it so as per BJP-RSS-Modiji ideology?

Pulak Mitra: The act itself is never good or bad. It all depends on who does it.

Chandransh Pandey: Every action we take today will come back to us in future. Then talk about bravery and medals.