DailyOh! Didi to be in Delhi every 2 months, Lovlina assures India of 2nd Olympic medal

When it rains, it pours. And we are not talking entirely about the rains lashing over the country’s financial and national capitals today. Though, that is also something you need to read about. Raj Kundra has been accused of physically harassing a model, and also of orchestrating a Rs 3,000 crore fraud. (Photo: PTI)

The sensational allegations were levelled by BJP leader Ram Kadam. According to Kadam, Kundra’s Viaan Industries Limited started an online game — ‘Game of Dot’, which allegedly collected crores of rupees from various distributors across the county, and then cut off all communication. Kundra is currently in judicial custody.

Now, Didi Mamata Banerjee is heading back to Kolkata today after her Delhi sojourn. She met the top Opposition leaders when she was in the national capital and said that she will be visiting Delhi every two months. "Ab poore desh mein khela hobe" (the game now will be on all over the country)", was the remark with which she has blown the poll bugle for the 2024 Lok Sabha election. Now, China is making every possible effort to strengthen its presence along the Line of Action (LAC), especially in extreme weather areas such as Ladakh and Arunachal Pradesh. In this regard, it has started recruiting Tibetans in the People's Liberation Army (PLA) for deployment at LAC. It has been made mandatory for every Tibetan family to send one member to the PLA.

Back in Delhi, the Supreme Court today agreed to hear a petition seeking a probe into the Pegasus spyware controversy. A bench headed by Chief Justice NV Ramana took note of the submissions of senior lawyer Kapil Sibal that the petition has been filed and numbered and needed to be heard in view of the large ramifications of the alleged snooping. The hearing will be next week.

Let us now take you to Tokyo where Indian athletes are creating history.

Today marks a special day for India in Olympics. It is the first time in 21 years that an Indian has competed as an equestrian in the Olympics. Fouaad Mirza also became the third ever Indian equestrian to participate in Olympics in the sport, when he rode out at the Baji Koen Equestrian Park on his horse — Seigneur Medicott — today. Fouaad Mirza became the first Indian equestrian to compete at the Olympics in 21 years as he rode his horse Seigneur Medicott at the Baji Koen Equestrian Park today. (File photo: PTI)

A little about the graceful horse now. Seigneur Medicott, lovingly known as Micky, is a dark bay Westphalian gelding, who was foaled in 2006. He has completed 34 times and won 10 times. He was the German Champion in 2017 and was purchased the same year by the Embassy Group, the same group that is sponsoring Fouaad. This brings us to our Word Of The Day — equestrian. An equestrian is someone who is a rider or performer on horseback, according to the dictionary. The word comes from equus — the Latin word for horse.

In more news from Tokyo, Lovlina Borgohain has scripted history at the Tokyo Olympics. She has assured India of the second medal after beating Taiwanese world champion Nien-Chin Chen to progress to the medal rounds. She is now the third Indian boxer after Vijender Singh and Mary Kom to win an Olympic medal and the first since Mary Kom in 2012. 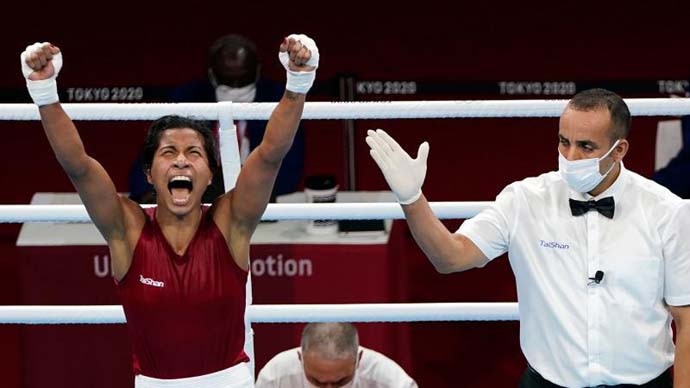 However, it was a heart-breaking moment for the country and World No 1 archer Deepika Kumari as she bowed out of the Tokyo Olympics after losing to Korea's An San in the Women's Individual archery quarterfinals. Indian shooters Manu Bhaker and Rahi Sarnobat also failed to hit the bull’s eye at the Women's 25m Pistol final, ending India's Pistol campaign in Tokyo 2020.

In badminton, PV Sindhu has stormed her way into the semi-finals after defeating Japan's Akane Yamaguchi 21-13, 22-20. She has now inched closer to her second Olympic medal and will now face either World No 1 Tai Tzu Ying of Taiwan or World No 6 Ratchanok Intanon of Thailand in the semi-final.

The brilliant performances and the promise of a second medal deserve a celebration. You can have your own little private celebration with homemade muffins. Also, because it's Friyay.

We will see you Monday. Bye!

Also Read: Line Of No Control, the heightened threat of Indo-China military escalation