The unsung hero: Michael Collins was a man on a mission

Michael Collins, who piloted the Apollo 11 Command and Service Module, died on April 28 at the age of 90.

In the film Castaway (2000), Tom Hanks probably remained the loneliest man for four years on the planet. But there was still a hope (albeit very faint) of rescue; a near uncertain prospect of escape (eventually, he did manage to get away). But he did not have the weight of the world riding on his shoulders, nor the lives of his colleague’s dependent on him. He was given up for dead and the world carried on as usual.

Or take the Biblical first man. His solitude would have been unparalleled. But he knew no better.

But imagine being the loneliest person in the universe, albeit for just over a day, with no contact with the outside world for a significant part of that time and being responsible for the safety of men and mission under the full glare of the world. What would happen if the machine of the men malfunctioned, and they could not reach you? What would go through your mind if you were instructed to leave them to die? How would you live with that life-altering guilt for the rest of your life? How would you sleep in the night knowing that you would be a marked man till your dying days? 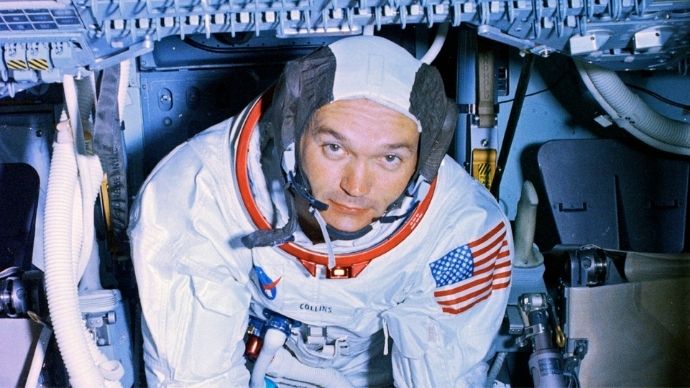 Michael Collins piloted the Apollo 11 Command and Service Module and was a part of the three-man moon-landing crew. (Photo: Wikimedia Commons)

Not only did Collins, for a brief while, remain the loneliest person in ‘the whole lonely world in the whole lonely orbit around some lonely thing’, but he remained throughout his life in the shadows of his illustrious colleagues Neil Armstrong - the first human to walk on the Moon, and Edwin Aldrin who followed him soon onto the lunar surface. Collins had remained behind, in lunar orbit. Alone! His work was no less vital.

But the world loves front men, not backroom boys.

Collins, who piloted the Apollo 11 Command and Service Module and was a part of the three-man moon-landing crew, died yesterday, on April 28. He was 90. Though he travelled some 238,000 miles to the Moon and came within 69 miles of it, he never set foot on it like both his crewmates.  None of the men flew in space after the Apollo 11 mission.

Collins did have a chance to walk on the Moon though, but he did not take it. He had been assigned to be backup commander of Apollo 14 even before the first Moon landing. That would have put Collins in line to command Apollo 17. Collins declined to say that if Apollo 11 went well, he wanted to retire from the space program. By then, he was tired of the grind. He had worked on Apollo 8 earlier.  As its capsule communicator, Collins sat at NASA's Mission Control in Houston, speaking directly to the crew during the launch and giving them key directions later in the mission. He became the first person to utter the words, “You are a Go for TLI (Trans-Lunar Injection)” - the first-ever command to a spacecraft to leave Earth's orbit for a journey towards the Moon.

After the Moon landing, Mission Control teased him that he was the only person who did not have TV coverage of the scene. “That’s all right. I don’t mind a bit,” he responded.

Collins was alone for nearly 28 hours before Armstrong and Aldrin finished their tasks on the Moon’s surface and lifted off in the Lunar Lander. Collins was responsible for re-docking the two spacecraft before the men could begin heading back to Earth. Had something gone wrong and Aldrin and Armstrong been stuck on the moon’s surface — a real fear — Collins would have returned to Earth alone. In his 17 years as a fighter pilot, test pilot and astronaut, no flight had worried him as much as the Lunar Lander’s 3½ -hour trip to reunite with the Apollo 11 Command Module. That foreboding never came to pass. All three crew members made it to the triumphant splashdown in the Pacific and the subsequent victory tour around the world including Mumbai.

So, what Collins do all this while as he sat alone without even radio communication to connect him to the rest of humanity? The Moon’s bulk blocked the Earth from view and cut off contact with Mission Control for large portions of his orbit. He kept the Command Module going and running through the 117-page list of contingencies he had prepared in case anything went awry.

Some music bands have speculated on what went through Collin’s mind while his colleagues were taking giant leaps for mankind below.

Jethro Tull, the British progressive rock band, released the song For Michael Collins, Jeffrey And Me in their third album Benefit in 1970, less than a year after the moon landing on July 20, 1969. The following verse imagines how Collins might have felt, left out of the famous moonwalk, but also to hold the greatest responsibility for the success of the mission. He gets no glory because he did not walk on the moon.

Though it's a shame that it had to be you

Is just a blip from your trip made for two

I'm with you boys

It's on my mind

I'm left behind when I should have been there

The song is a mournful and impressionistic tale whose dynamic shifts, between faint verses and full-bodied choruses, are thrilling and touching in equal measure.

US musician Matt Sharp began thinking about Collins while reading his memoir Flying to the Moon- An Astronaut’s Story (published in 1994). That experience set Sharp to write a song about Collins. Everywhere he encountered the same query – Who is Michael Collins? Much of the world had been asking the same question. Reason- Collins had neither the fame of Armstrong, the first person on the moon, nor Aldrin, who has led a colourful and public life. Collins remained in the background—a sober, graceful, intellectual figure.

This was partly because of his personality. He had stayed clear of the rivalries that marked life at NASA — including the reported bitterness between Armstrong and Aldrin over who would get to set foot on the moon first. After their Apollo mission, when Armstrong turned reclusive and Aldrin struggled with alcoholism, Collins thrived outside the glare of publicity. He hated the adulation of celebrities and the inflation of heroism.

He had a deep respect for those who understood what his mission entailed. The pioneering transatlantic aviator Charles A. Lindbergh sent a letter to Collins after the moon landing lauding his role in the mission, stating that Collin’s experience had greater profundity. He went on to compare Collins’s solitude to his own solo flight across the Atlantic and said that he felt closer to him in orbit than to his fellow astronauts he watched walking on the surface of the moon.

“They’re bouncing up and down in the tranquil sea/Three hundred million girls watch on TV,

Oh, I know, what I know, and I know it's just jealousy/But I feel what I feel, and I feel it endlessly”.

The Apollo 11 mission also carried music. Armstrong took along a cassette tape of tracks from the 1947 album Music out of the Moon by Lex Baxter.

Collins said they listened to Everyone’s Gone to the Moon on personal recorders.

What did Collins have to say about this portrayal of his?

Collins insisted that he was not lonely. After being confined in the small Command Module with his colleagues, he enjoyed the respite while tracking their activities on the Moon's surface. He claimed that he had a happy little home in the Command Module. Behind the Moon it was very peaceful — no one in Mission Control was yakkin' (his words) at him and wanting him to do this, that, and the other. He was very happy. From his perch 60 miles above, he described what he saw as the “withered, sun-seared peach pit” of the Moon. He said that the sight of Earth stole the show. The Blue Marble was the most beautiful sight he saw from outer space; it beckoned to be looked at – it was so fragile! Also, bizarrely, Collins stated that he was worried about a bunch of tiny, white mice. Upon returning from the moon, the Apollo 11 astronauts were to spend a couple of weeks in quarantine alongside a colony of white mice. If the mice fell ill, it would mean that perhaps they had brought ‘moon germs’ back with them.

After retiring as an Astronaut, in several books, including Flying to the Moon and Other Strange Places (1976) and Mission to Mars (1990), Collins was an eloquent advocate for continued space exploration. No other person who has flown in space captured the experience so vividly. Collin was of the view that it is human nature to stretch, to go, to see, to understand. Exploration was not a choice — it was an imperative.

Although Collins never got to leave his footprints on the Moon, one small spot there bears his name — a tiny impact crater in the Sea of Tranquility, about 15 miles from the Apollo 11 landing site. That was about as much recognition as he wanted. He hated astronauts being treated as celebrities. They worked hard, did their jobs with near perfection, but that is what they were hired to do.

All three astronauts were awarded the Presidential Medal of Freedom, America’s highest civilian honour. “His contribution to this great undertaking,” each man’s medal citation read, “will be remembered so long as men wonder and dream and search for truth on this planet and among the stars.”

That, unfortunately, was not always true of Collins, whose name never gained the universal recognition of Armstrong’s and Aldrin’s.

Human exploration, from the mass exodus of Homo Sapiens from Africa to the Phoenicians in the Mediterranean, the Polynesians traversing the Pacific Ocean, and up through the 20th century that saw the birth of air flight and then, a few decades later, the landing of the first humans on the moon, is a continuing journey. It's not only the man who walks the moon who represents it, but also the man who took him there. The Sherpa at the base camp is as integral to this never-ending quest as the mountaineer who sets foot on the peak.

Michael Collins has become a metaphor for the unsung hero.

Rest in peace, Michael Collins. You would be having a great view of our planet and its satellite.

Also read: Who wants to live on the Moon?

#Neil armstrong, #Moon mission, #Flying to the moon, #Apollo 11
The views and opinions expressed in this article are those of the authors and do not necessarily reflect the official policy or position of DailyO.in or the India Today Group. The writers are solely responsible for any claims arising out of the contents of this article.