DailyOh! When 7 cr Indians plunged into darkness, to how Big B was worst hit by power outage

India has had the world’s biggest power outage for two days straight.

People in India’s gated highrise societies keep scented candles. This does not mean people not living in India’s gated highrises do not keep scented candles. But the latter also keep the long and thick white candles because light ka kya hai. Of course, outages are not as frequent and long as outages once were, but there is no guarantee as to when you might have to go looking for the candle. Outages in India are so common that people keep candles handy. (Photo: Reuters)

There can be a grid failure, there could be a fire in the locality, there could be load shedding or just too much load on the line supplying power to your house to keep the supply going. Last week in eastern Uttar Pradesh, power cuts went on for as long as 16 hours because the employees of the power department were protesting against privatisation. Many missed the story because ek to UP, wo bhi eastern.

Today’s power outage, lasting about three hours, was hard to miss because it was Mumbai. Bambai main ka ba? Media attention. Same goes for Delhi but the power outage was in Mumbai so why go to Delhi?

Mumbai had Covid patients on ventilators and people going up and down buildings in elevators. There were people going around in locals too. Ventilators had backup. Elevators, as you know, are always backed up by stairs. It’s the locals that waited for power to be restored, which was fully restored in four hours. What caused the power failure? A grid failure. Maharashtra Chief Minister Uddhav Thackeray has ordered an inquiry to find out how the grid failed.

A major fallout of the outage was that mega star Amitabh Bachchan got his tweet numbering wrong. You may not understand how big that problem is if you are not Big B. 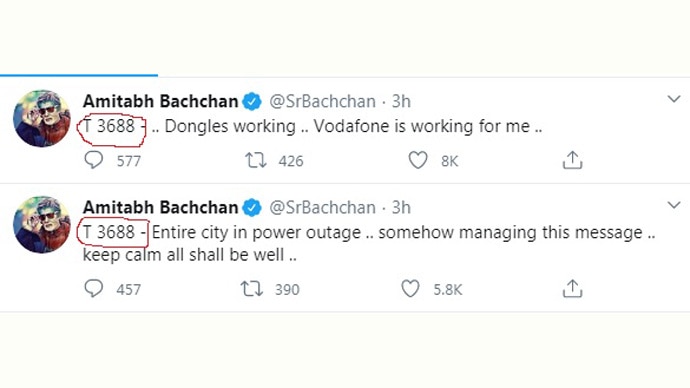 The thing about big incidents is that they tend to remind you of bigger incidents. The four-hour Mumbai grid failure reminded us of the two consecutive day power failures of north India in July 2012. And this one had a Maharashtra connection.

On July 30, 3,00,00,000 people were impacted when the northern grid in the country failed. To get the northern grid back to work, it was synchronised with the grid which comprised the Northern, Western, Eastern and North-Eastern grids. This synchronisation led to the failure of the new grid plunging over 7,00,00,000 people into darkness. Power backups too had failed by August 1, when the full restoration took place. This is the largest power failure ever reported in any country. Many countries do not even have those many people to plunge into darkness or to pull them out of it.

Enough of power cuts; let’s move to something else. Oh, wait. We did tell you about a Maharashtra connect. Sushil Kumar Shinde, a Maharashtra Congressman, was the Power Minister when the world’s biggest power outage happened. He was then elevated as India’s Home Minister the same year.

India’s Finance Minister Nirmala Sitharaman today announced an allowance of Rs 10,000 as special festival advance for employees. Not all employees, only its employees, as in the government employees. They will also be given benefits under the LTC Cash Voucher scheme. The government believes if people get money during festivals, they will spend. If they spend on buying something, someone would earn by selling something.

All buying-selling can take the country forward only under Prime Minister Narendra Modi. This may or may not be many people’s belief, but it sure is the belief of Kollywood actor-turned-Congress-woman-turned BJP leader Kushboo Sundar.

In 2019, Sundar had said that Narendra Modi has no appeal in Tamil Nadu. In 2020, Modi appeals so much to Tamil Nadu politician Sundar that she believes: “The country needs someone like PM Narendra Modi to take the country in the right direction."

But in a development connected to Sundar’s joining BJP was Sundar’s resigning from the Congress. Before Kushboo resigned, she was removed by the Congress as Congress spokesperson because of speculation that she may join BJP. Now that you have got a tip on how to pen a resignation letter, let us tell you what resignation is. For one, it is our Word Of The Day. Resignation comes from resign, which comes from Latin word resignare, which means to ‘unseal or cancel’. When you sign up for something, you commit to doing it. When you resign, you want to break out of the commitment.

Resignare also at one point meant ‘to make an entry in an account book’. This entry was supposed to be opposite on the credit side - in a way to balance the claim by cancelling it.

Delhi's Ramleela event, held every year at the Red Fort, and attended by the Prime Minister and the President, has been cancelled this year because the pandemic’s leela is far from over. In Europe, restrictions that had been lifted, are being reimposed because the cases are rising again.

In India, Himachal Pradesh Chief Minister Jairam Thakur has tested positive. He is at his government-allotted residence in isolation.

Donald Trump, as you know, who tested positive on October 2 is out and about. A farmer in India, meanwhile, has died fasting for Trump to be out and about. Bussa Krishna Raju was an ardent fan of Trump. So ardent that when Trump fell ill, Raju refused to eat and spent many sleepless nights praying for his (physical) well-being. On Sunday, Bussa died because of a cardiac arrest.

Trump, meanwhile, is celebrating the improvement in his approval ratings.

His fellow citizens Paul R Milgrom and Robert B Wilson are celebrating their Nobel win in economics. What bagged them the award? Improvements to auction theory and inventions of new auction formats.

We will be back on Tuesday.

Also Read: Why India isn't a hungry nation but a society of full, yet undernourished bellies

#Khushbu sundar, #Donald Trump, #Amitabh Bachchan, #Mumbaipoweroutage
The views and opinions expressed in this article are those of the authors and do not necessarily reflect the official policy or position of DailyO.in or the India Today Group. The writers are solely responsible for any claims arising out of the contents of this article.