When the financial capital of India with the richest civic body in the country drowns repeatedly, what hope is there for rural swathes?

As images and videos of #MumbaiFloods drown social media and television news; as the horrific scene of the financial capital of India sinking under over 300mm rainfall plays out in a loop, the comparisons have started rolling in. Essentially, these are the holier-than-thou posturing from some powerful mediapersons, who put forward the question why Bihar and Assam floods, despite the high death toll touching 1,200, do not make it to the top “trends” or 24x7 immersive TV coverage, like the way Mumbai floods do.

The comparison is actually a fraudulent one, because it does disservice to both the cases. Each case of flooding is different, though the cumulative impact is essentially to turn TV and other news media into disaster reportage of the sensational kind, where one disaster is played off against another.

So, comparing Mumbai floods to Assam or Bihar in order to pose the question why one gets round-the-clock reportage from every possible angle, why officials are pulled up and questioned on-camera in case of the former, while the latter gets lost in the several other headlines of the day is really one of media’s own soliloquies, its own prejudices that it now flaunts in the open.

Dear Editors; you are THE guys who pick #MumbaiRains in headlines ignoring #BiharFloods. So cut the crap and stop making stupid assertions.

Let’s look at why Mumbai is a story of its own, and why it matters that #MumbaiFloods gets reported round the clock.

Firstly, the Brihanmumbai Municipal Corporation, which just held its elections and arch-rivals Shiv Sena and BJP joined hands to lord over Mumbai, is the richest civic body in the country. It’s a cash-cow because it’s Mumbai where the stock exchanges and share market rise and fall, determining the financial mood of the day. A sinking Mumbai sinks the economic climate of the entire country and the losses can be staggering. 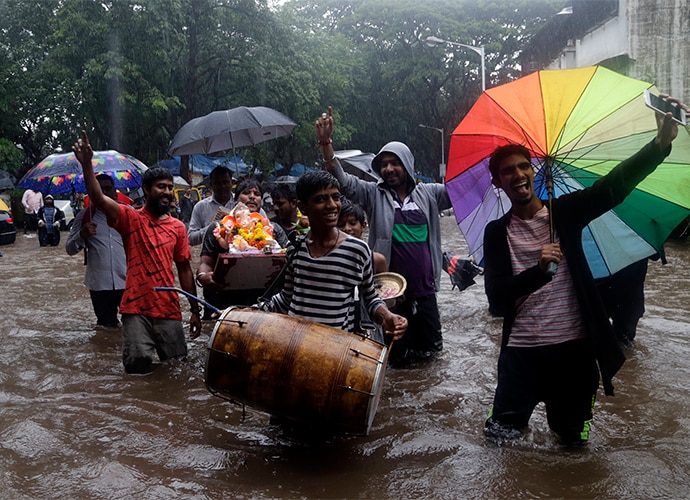 Secondly, Mumbai being the home of the industrialists, film stars, advertising industry and the nerve centre of the financial circuits has a far-reaching impact and hold on many crucial aspects of Indian political economy.

Thirdly, Mumbai is densely populated a city, with over 18.41 million residents spread over its vast expanse. Mumbai drowning immediately puts many more people at risk than comparative area in any other part of India.

However, that doesn’t take away from the fact that Bihar and Assam floods have taken many more lives, because the little infrastructure and help at hand that Mumbai denizens could afford, wasn’t available for these two states. All three regions have BJP as senior or junior partner in the ruling government, and the less said of the BJP’s disaster management skills, the better.

Many people have asked what has Mumbai learned from the previous instances of flooding, particularly the July 26, 2005 flooding that killed over 1,000 people in the Maximum City. It seems to be a case of déjà vu for most Mumbai denizens, many of whom watch the English newschannels that have been invaluable in spreading the word, helping connect, projecting outreach and telecasting bulletins for medical, food supplies centres.

There is no financial capital of any country like Mumbai which is treated so shabbily & irresponsibly by the authorities years after years.

While there has been outrage, Twitter has also come to help those stranded, but with smartphones. Many have opened their doors to perfect strangers, restaurants have offered tea and snacks.

If anyone stuck in Lower Parel can make it to @bombaycanteen, our doors are open for some garam chai, working WiFi & warm hospitality. ???? pic.twitter.com/lOZEULpmqN

Mumbai is also a human resilience story, and not just a disaster story. Though the “spirit of Mumbai” is a much abused term which has been called out, the individual resilience and collective camaraderie at a time of utter chaos and deluge, is the feelgood angle which is not entirely without its merit.

We show middle class suffering, power cuts in elite areas, time to remind ourselves half of Mumbai lives on street/in slums! #MumbaiRains

On the other hand, there are those in Mumbai who too get left out despite the immersive coverage. In the hunt for stories of valour, courage, we tend to overlook the relentless suffering of the slum and footpath dwellers whose homes have been washed away, and who will perhaps get no help from the BMC or the government to rebuild their makeshift homes.

When the stories of the actors, politicians, industrialists and the rich of South Bombay get over, when they have stopped tweeting, the poor of Mumbai will be joined in their suffering with the poor of Bihar and Assam. The story is in the poverty, in the inadequate relief and preparedness despite winning elections time after time, in spending resources garnering political power and flexing those muscles, while trying to shape the narrative.

Yes, not covering Bihar and Assam floods enough is criminal. But the editors who are lamenting on Twitter, who has tied their hands? What has made them wring their hands in frustration? Why don’t they show the way by doing justice to both, because the slick but inane comparison wouldn’t get them any more brownie points.