DailyOh! BJP and TMC go all guns blazing in Nandigram, to why you should have ghewar today

Suvendu Adhikari mounted the BJP rath, Mamata Banerjee her wheelchair as campaigning drew to a close in the high-stake constituency.

Hope you had a safe Holi if you played Holi. If you did not, well, you ranked a little higher on the Corona-prevention list. Now, to this week.

When friends turn foes, they experience pain. Everyone else on the sidelines experiences the thrill of watching them settle scores. Suvendu Adhikari today mounted the BJP rath, whose charioteer was India’s Home Minister Amit Shah. Atop her wheelchair, being moved around by her staff, was Bengal Chief Minister Mamata Banerjee, who was once upon a time Suvendu’s boss of sorts. Banerjee has been camping in Nandigram over the past few days because Nandigram goes to polls on April 1 and the campaigning ended today at 6 pm. But why did she choose Nandigram and not Singur? Because Banerjee wants “to pay my respects to the mothers and sisters of this place. To salute the Nandigram movement, I chose Nandigram over Singur."

The 85-year-old mother of BJP worker Gopal Majumdar passed away yesterday. The mother, who was not from Nandigram but Nimta, was allegedly beaten up by TMC goons just days ago. With campaigning in Nandigram coming to an end, Mamata Banerjee can move to other parts of the state, including Nimta. Mamata Banerjee has been camping in Nandigram for the past few days. (Photo: PTI)

Prime Minister Narendra Modi moved from Delhi to Kerala today to address a rally in Palakkad and tell people to rally behind ‘Metro Man’ E Sreedharan because “the LDF government in the state betrayed the people for a few pieces of gold”. The few pieces that the PM spoke about were actually quite a few. The pieces together weighed 30 kgs and were actually worth Rs 14,82,00,000. The consignment was seized by the authorities in July 2020 at Thiruvananthapuram airport from a diplomatic bag that was meant to be delivered to the UAE Consulate in the state. It was later found that people working closely with CM Pinarayi Vijayan were involved in the scam. Kerala will vote on April 6 and only April 6 and then wait till May 2 for the results.

On April 1, when people would be voting in Nandigram and other constituencies, PM Modi would be in Assam’s Kokrajhar, where the security forces are in a tizzy. The tizzy has been caused because a cache of arms and ammunitions has been recovered from the state. The cache includes three AK-56s, three AK-56 magazines, and 157 rounds of bullets.

This Kokrajhar arms haul, however, took us 26 years back to the Purulia arms drop. It was the night of December 17 in 1995. People in Purulia had gone to sleep. The insomniacs may have been awake but they have not been accounted for in the story. Those who were asleep were woken by the roar of a Russian plane with a Latvian crew. Among the passengers were a British arms dealer and a Danish smuggler. The aircraft began dropping ammunition from the skies. As many as 2,500 AK-47 rifles and more than 1,500,000 rounds of ammunition landed over a large area in Jhalda, Khatanga, Belamu and Maramu villages that night. It’s like it rained ammunition. Locals called the police and the police confiscated the weapons. The aircraft flew off to Thailand. Later, five Latvians on the plane and the British dealer were caught when they landed back in India. The Dane, whose name was Kim Peter Davy, evaded arrest. Multiple agencies probed the incident but the truth of the incident never came out. You see if truth is hidden after extensive probe, it is clear someone is trying to hide the truth. The arms dropped in Purulia in 1995. (Photo: Wikimedia Commons)

The incident’s key conspirator Kim Peter Davy however later claimed that the whole thing was orchestrated by the then Congress government at the Centre. According to Davy, the plan was to have the ammunition dropped and then use it as the reason to impose President’s rule in West Bengal. Bengal then was under the Communist government’s rule and Jyoti Basu was the CM. Some theories suggest the arms were meant for Ananda Marg, a religious cult. Why should a religious cult have weapons? Because killing in the name of religion has been mankind’s favourite killing motive since religion has been around.

A sword-wielding mob attacked police officials at Maharashtra’s Nanded gurdwara after being denied permission to hold a religious permission. That is level 2 of seeking permission – extracting it from those denying it. Seventeen of the extractors have been held and FIRs have been filed against about 400 others.

Mobs and madness share more than just the alphabet M. Sharing the madness of mobs on Monday were Holi revellers. A 60-year-old woman was thrashed so bad by the revellers that she died in Uttar Pradesh’s Etawah area. Five members of her family were injured by the drunk men for trying to save her. The men will go to prison for playing a bloodied Holi but do you know where does the word reveller comes from?

Myanmar’s military junta revelled over military men killing over 100 people. The party was thrown by military junta chief Min Aung Hlaing even as thousands of people fled Myanmar to enter Thailand. A lot many, as you know, have been entering India too via the Manipur border. People flee persecution to save their lives. When they land at a ‘safe’ place they still need food and shelter to live. The Manipur government issued a circular saying ‘no food or shelter for Myanmar nationals’. After a lot of criticism the government withdrew the circular. 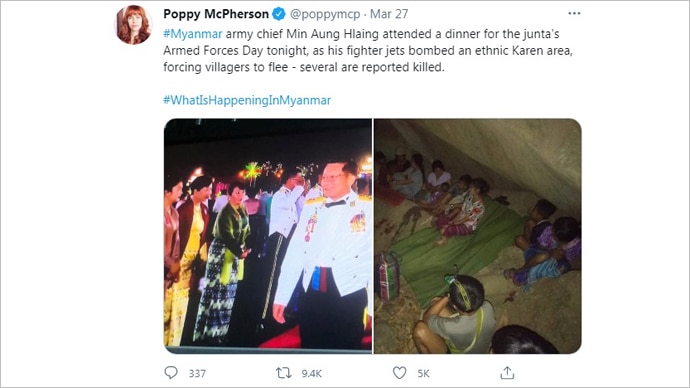 From Manipur to Rajasthan. Today is Rajasthan Diwas because Rajasthan was formed in 1949 on March 30. To celebrate Rajasthan away from Rajasthan, top your plate with ghewar. To do that you’ll first need ghewar. If you want to order, go ahead. But if you want to make it at home, count on us for the recipe.

Meanwhile, the corona count is rising and hospitals are running out of ICU beds. Former Indian cricketer Irfan Pathan has tested positive even as Union Health Minister Harsh Vardhan has received his second dose of coronavirus vaccine. Tell people about social distancing and Covid norms and they tell you about election rallies flouting them all. So don’t tell people anything. Just do the bare minimum to protect yourself – wear your mask, wash your hands. Any laxity can cost you your health.

What did the Suez Canal blockade cost the world? According to data from Lloyd’s list, 12 per cent of global trade and trade valued at over Rs 6,60,33,00,00,000 per day. Do you know who cleared the blockade? Moon, the Supermoon. The moon’s gravitational pull caused high tides and helped refloat the Ever Given. This is not to take away credit from JCBs and other tug boats that pitched in. This is just to give the full Moon its full due. A satellite image showing the ship stuck in the Suez Canal. (Photo: PTI/AP)

We will take your leave for the day with that.

Also Read: Meera vs Meera, in search of the real Meera

#Narendra Modi, #Suvendu adhikari, #Mamata Banerjee, #Nandigram
The views and opinions expressed in this article are those of the authors and do not necessarily reflect the official policy or position of DailyO.in or the India Today Group. The writers are solely responsible for any claims arising out of the contents of this article.