Narendra Modi presented before Indian voters both his achievements and the BJP government’s vision for the future. He also laid forth some new ideas, for farming, the middle class and other sections.

Prime Minister Narendra Modi, in a very candid, articulate and endearing interview, yet again proved his critics wrong by clinching the narrative ahead of 2019.

Modi answered the political pundits who had begun to write his obituary after the recently concluded Assembly elections, by presenting a detailed report card of his achievements and calling electoral defeats just one of the many aspects of democracy.

By highlighting the importance of a strong Opposition in a democracy, the Prime Minister intimated Indian voters of the existing weaknesses that cannot be overlooked against the backdrop of electoral victories.

In an interview that went on for well over an hour, the Prime Minister set the agenda for 2019 by laying out his achievements and putting forth an aspirational vision for the future. Here are some points that struck me as significant and in fact, introducing new conceptual frameworks.

The Prime Minister once again stressed on the importance of good governance through transparency, feedback and collaboration. Taking a swipe at those who begin to feel unsafe during election season, the PM said there are multiple agendas being run by motivated interests to demean his credibility — but that won't deter him.

He said India needs to empower (not support) farmers right from 'beej to bazaar' or buying seed to selling the produce in the market. The country needs to build a system where farmers don’t fall into the deep crevice of debt and regressive policies like loan waivers, which have proven to be ineffective in the long run. Narendra Modi has called for a permanent end to the miseries faced by farmers, and not drips of short term relief. (Source: Reuters)

Loan waivers given in 2008, for instance, did little to improve the lives of farmers and the PM was clear that his government did not want to repeat the same mistake for short term gains. Modi said making farmers self-reliant and agriculture a sustainable occupation through value-addition is the way forward.

The PM said communal violence is a consequence of layered distortions that have seeped into our society for decades. It is the prerogative of every citizen of India to uphold the values of fraternity and brotherhood. However, it is not a phenomenon that emerged post-2014 and thus, by implication, it is unfair to hold him solely responsible for the unfortunate incidents.

Schemes like UJJWALA, Saubhagya and Ayushman Bharat are telling of Narendra Modi’s commitment to ‘development for all’, irrespective of the social or ethnic background of the beneficiary.

In 2014, when India decided to vote out the UPA government, the nation was suffering from policy paralysis. A cesspool of corruption and scams had clutched the system from all sides.

But now, the Prime Minister, who rode to power on the plank of 'Na Khaunga, Na Khane Dunga', is often ridiculed by his supporters for not doing enough against corrupt bigwigs.

When asked by the interviewer about the same, Modi quickly listed out reforms measures such as The Fugitive Economic Offenders Bill, 2018, and the fully digitised GST system to tackle those who attempt to feed off India’s wealth at the cost of honest citizens. 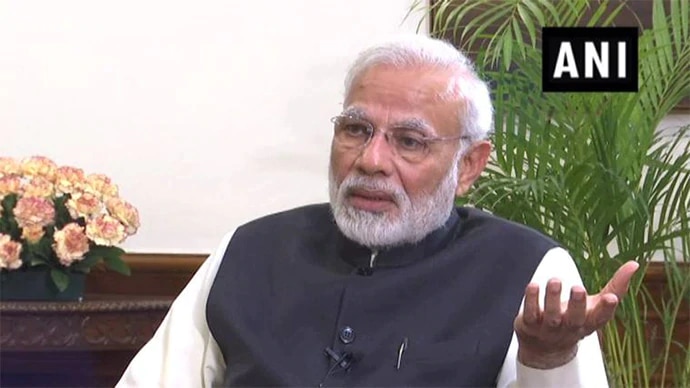 Modi quipped that offenders were desperate to escape now because these wrong-doers were aware of the unforgiving consequences of committing any sort of misconduct under his government.

The fact that former Finance Minister (P Chidambaram) himself is apparently running from pillar to post, and is unable to shake off corruption charges levied against him, reflects the resoluteness of the Modi-led NDA to fight corruption and impropriety, as was stated.

Modi said the long term aim is to make India self-sufficient with the help of the ambitious 'Make In India' programme and ensure that scams like AgustaWestland and middlemen like Christen Michel are not able to arm-twist India again.

The PM chose to remind Indians that the 'first family' of Indian politics was out on bail on account of financial irregularities, reiterating his firm stance against corruption, irrespective of the clout of persons allegedly involved.

Modi said that political violence needs to be dealt with an an iron hand. Unrest is brewing in states like West Bengal and Kerala where there is no space for ideological coexistence. He said states cannot provide sanctuaries to murderers because it is against the very ethos of the Indian Constitution. 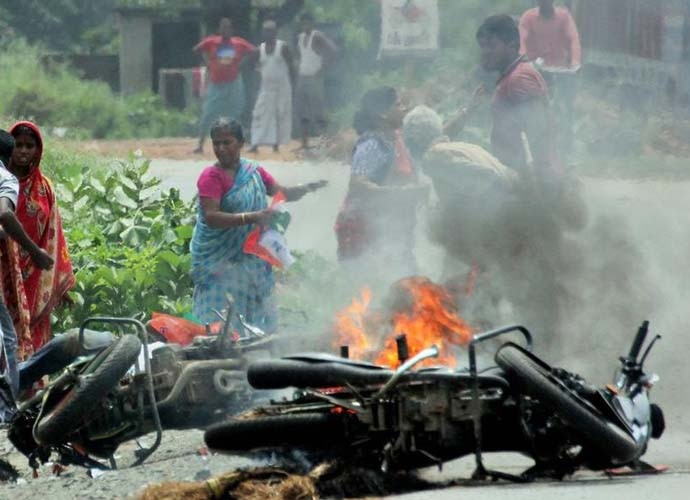 Modi also said that when it comes to national interest, the entire country should stand united. It is unbecoming of political leaders and groups to speak in the same tone as Pakistan and cast aspersions on acts of courage of the Indian forces.

On the question of Pakistan, he said India always supported dialogue, irrespective of the political party that occupied the treasury benches. The Prime Minister agreed that his foreign tours are also discussed on a much wider forum, mainly because he believes the world needs to know India and its leadership position.

With the mahagathbandhan gaining currency, Modi said the group comes across as fractured and incoherent in his view.

He said the result of the general elections should be left to the wisdom of the Indian voters, who, he said, are aware of the intentions and capabilities of different political leaders across the spectrum.

He said regional aspirations need to be prioritised by moving towards a federal country.

Modi sounded the poll bugle for 2019 by asking media to innovate with its own terminologies. For instance, Modi said it is incorrect to brand the BJP as a 'Hindi-region, upper caste party', since the party had successfully expanded its footprint across the nation.

The BJP, he said, with its strong network of booth-level workers and organised strategy, is determined to take on the Opposition that is riding on recent victories.

By reaching out to women, minorities, youth, entrepreneurs, traders and neighbours, it is evident that Narendra Modi, like a thorough politician, has fastened his seat belt for the much awaited big battle ahead.

It is to be seen whether his competitors now respond in the same vein.

Post your comment
#Farm loan waiver, #GST, #Modi interview, #Narendra Modi
The views and opinions expressed in this article are those of the authors and do not necessarily reflect the official policy or position of DailyO.in or the India Today Group. The writers are solely responsible for any claims arising out of the contents of this article.