“Didi bole khela hobe, BJP bole vikas hobe,” thus spoke BJP’s numero uno and country’s Prime Minister Narendra Modi in Bengal, where he will also be speaking on March 24. All set to join Modi’s March 24 rally at Contai in East Midnapore is TMC MP Sisir Adhikari, father of BJP's Suvendu Adhikari. Sisir said he would join the BJP if the BJP asked him to. Suvendu has said he will ask his father to attend the rally of BJP’s numero dos, Amit Shah, too. After showing his face at so many BJP rallies, Sisir may or may not join the BJP, but it would be difficult for him to remain a face of the TMC. Guess who else became a face of the BJP today? Arun Govil, who in the 1980s became the face of Lord Ram on Indian television.

Who are the faces of Chehre? Amitabh Bachchan and Emraan Hashmi. What about Rhea Chakraborty, who had earlier announced that she would be a part of the film? She seems to be a fleeting face of the film if we go by the trailer - which is a fleeting synopsis of any film - released today. Rhea Chakraborty has been seen in the trailer of Chehre. (Photo: Reuters)

So Rhea Chakraborty is a part of Chehre but former Chief Economic Adviser Arvind Subramanian has ceased to be a part of Ashoka University just two days after renowned columnist and political commentator Pratap Bhanu Mehta left the university. Is Ashoka University the new TMC which everyone wants to leave? Subramanian says Mehta didn’t want to leave but was forced to leave. Subramanian’s own exit was forced by the ‘forced leaving’ of Mehta.

What could have forced wrestler Ritika Phogat to allegedly take the extreme step is a loss at a wrestling match. Seventeen-year-old Ritika Phogat was the cousin of Babita Phogat, who trained under Mahavir Phogat. She participated in a state-level competition at Bharatpur in Rajasthan between March 12 and 14 and was found dead by her uncle Mahavir on March 17. Police say the circumstances of the wrestler’s death are being investigated. 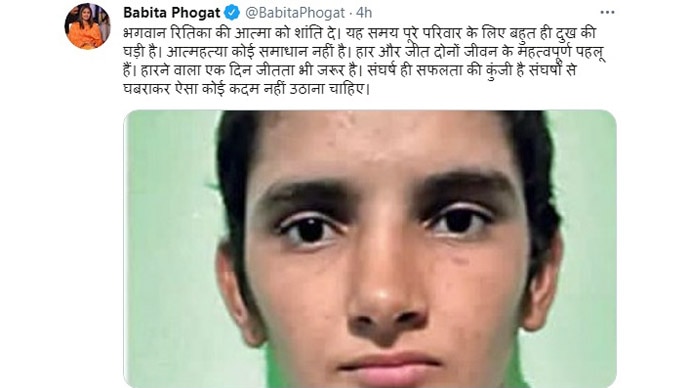 We will, meanwhile, investigate the word wrestling. Wrestling, the Word Of The Day, comes from the word wrest. Wrest finds its origin in Old English word wraestan, which meant ‘twist or tighten’. Wrestling is a combat sport that involves grappling holds such as clinch fighting, throws and takedowns, joint locks and pins to force the opponent into submission.

It is said wrestling is the oldest sport played by humans. In fact, it dates back to before 3000 BC. How do we know this in 2021? Because cave drawings from that era depict wrestling moves and techniques used to this day.

The court would know that actor Brad Pitt allegedly subjected actor Angelina Jolie to domestic abuse during their marriage from 2014 to 2019 because Angelina Jolie says she has “proof and authority” to support her claim. Among the proof and authority, we are told, are testimonies of the couple’s six children. Pitt may have to dig in for some counter proof to convince the court that he didn’t do what he is being accused of.

This case, however, reminded us of a case that Brad Pitt filed on July 18, 2001. Brad Pitt we all know was married to Jennifer Aniston before he married Angelina Jolie. When the going is good in any relationship, there is really that going-for-the-sun-and-the-star kind of stuff happening. The rich go for diamonds because nobody really gets to get to the sun and the star. Brad Pitt reached out to Damiani International to make the wedding ring he wanted to present to Aniston. Brad Pitt and Jennifer Aniston when the going was good. (Photo: Reuters)

Damiani did make the ring but then went on to make similar rings for others. Pitt said the ring was supposed to be exclusive. Most such suits filed in courts are settled out of court. Pitt and Aniston went on to endorse the replicas that Damiani sold. And they (did not) live happily ever after... The couple was no longer a couple in 2005 and the years that followed.

The end of coronavirus pandemic, whenever it is, too may not help us live happily ever after. If you are weak-hearted, read no further. If you are still reading, remember you are at your own risk. This pandemic could be followed by another pandemic on the back of a superbug called Candida auris. What are superbugs? Strains of bacteria, viruses, parasites and fungi that are resistant to most antibiotics and medications. The superbug has been found in samples collected from the Andaman Islands but scientists say there is no proof they originated there.

If Andaman reminded you of vacations and the mention of superbug told you you shouldn’t go, you may consider sitting at home and watching Netflix. Should you? A study says watching Netflix for 30 minutes harms the planet as much as driving 6 kms. A report by scientists at Royal Society in the UK has said HD video streaming on a smartphone generates about eight times more emissions than standard definition (SD).

What exactly is it that we can do without having to worry about what we are doing? We will let you know when we know.

For one, there is no immediate reason to stop wearing ripped jeans expect when you don’t want to pay for a piece of cloth that is ripped and if you can get into a ripped jeans without your toes getting stuck in the ripped threads. #RippedJeans trended on Twitter even as TS Rawat, who replaced the other TS Rawat as Uttarakhand Chief Minister, brought more embarrassment to the BJP than the earlier TS Rawat did, by passing disparaging comments about what women should wear. The BJP could just replace TS with TS again and hope nobody would know just like Chief Minister TS Rawat doesn’t know women wearing ripped jeans can do anything women wearing saris can, or anything that men wearing white kurta pyjamas can.

Who is anyone to tell anyone what to we wear and what to eat? All we want to do is recommend what you could drink, should you want to drink it - Virgin Piña Colada.

We will leave you arranging the ingredients to get your glass of Piña Colada ready.

Also Read: Cool it with a glass of kanji

#Coronavirus, #Ripped jeans, #Rhea chakraborty, #Narendra Modi
The views and opinions expressed in this article are those of the authors and do not necessarily reflect the official policy or position of DailyO.in or the India Today Group. The writers are solely responsible for any claims arising out of the contents of this article.