The story of great power, and chilling sacrifice, at Nartiang's Durga temple

The temple's past is steeped in blood, as it goes back to the time of the Jaintia kings, when human sacrifices were made here.

Blood has always marked this very ancient shrine to Durga in Nartiang, high in the Jaintia Hills. It is a place of strange power, where they say the soul of man can leave its mortal coil. Where one can find redemption. Where darkness and light coexist — and the pull of both is strong.

It is a place with a living consciousness, rising from somewhere deep within the mound of old rock and forests, even as the waters of the Myntang river swirl around and encircle it, as if in an embrace.

They call her the “guardian angel”. Myntang. The one who nourishes. Her swift waters flowed from high reaches and there was green and there was plenty. And from the temple on the hill, prayers were said, old words of power, spoken in a tongue unknown, and the sacrifice of blood flowed down, year after year, staining red the flush of green on the mountainside, colouring the sparkling water a muddy brown.

That was centuries ago.

Today, the green waters flow silent and sluggish at the foot of the hill. Dark rocks jut out at places. And from above, a red and white-painted small cement building looks down, a silent centre of the enormous power which lies embedded in the mountains there. The Jaintia Hills in Meghalaya holds many secrets within its dense forests. (Photo: Wikimedia Commons)

There are no ornate carvings or elaborate entrances. It could be a simple residential house. Seemingly innocuous, yet, there is something about it which holds a deeper menace. Surrounded by a paved courtyard, a narrow doorway, with brass bells gathered in a bunch above, leads into the building.

The floors are clean and marbled. Bright sunlight comes in through the open windows. The air is crisp and cool and the wooded mountains rise on all sides — but within, there is a strange vacuum in the air. A feeling of suddenness. Of being in a place of release, of transition.

Its past, steeped in blood, goes back to the time of the Jaintia kings when human sacrifices were made here. There is still a pit in the floor, which had an underground tunnel leading down to the Myntang river just below. It was down this pit that the severed head was rolled to the swift flowing waters of the river.

It was with the coming of the British that human sacrifice was stopped.

In later times, the practice of sacrifice continued, with goats and ducks being killed to propitiate the goddess. At the time of Durga Puja, more than a hundred goats are sacrificed, with the most important one still being demarcated as 'the King’s Goat'. There is a strange custom of a midnight goat being offered for sacrifice on the second day of the puja.

It is performed at midnight with only the priest being in the temple. The goat is dressed in human form, with a dhoti, a turban and earrings. Finally, a mask with a human face on it is placed on the goat’s head before the head is chopped off. The beheading is done in such manner that it rolls down that old tunnel which leads to the river. This sacrifice is said to be vital to the ceremonies, because it is this which symbolises the continuity of the tradition of human sacrifice from the time of the Jaintia kings.

They say, places of power seek sacrifice. To take away the darkness. To wash away the mark of sin. To grant boons. And so, it has been at this strange hilltop shrine to Durga, for centuries. 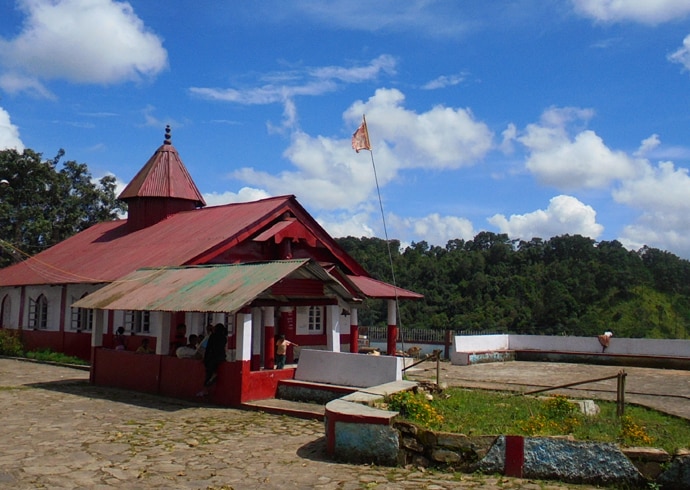 One of the secrets is this strange shrine to Durga in Nartiang, high up in the Jaintia Hills. (Photo: Deepta Roy Chakraverti)

There is a strange legend about the temple, which many do not choose to remember. This shrine was at one time the centre of the village and community which dwelt in the mountains there. When marriages took place, it was this shrine which was the centre of prayer and festivities. When children were born, they were brought here to be blessed. And when there was death, the mortal remains rested for a time at the edge of this shrine.

There is a story which talks of how, when there was an illness in the families that dwelt there, the sick person was brought to this sacred site. Sometimes, it was for a broken or sprained limb, sometimes for a fever and delirium, and sometimes, even when age had withered away, a frail body which was just waiting for release.

They say the families of these people would bring their sick relative to the shrine, and sometimes leave them there from sunset to sunrise the next morning. There would be no one else but the priest there. Often a family member would wait nearby but not slightly away.

The next morning, there would often be very strange cures. Word would spread from that shrine on the hill, of how the sick man had risen from his fever and eaten fruit before the goddess. Or, how a child on the brink of seeming death had risen and was looking for his mother. 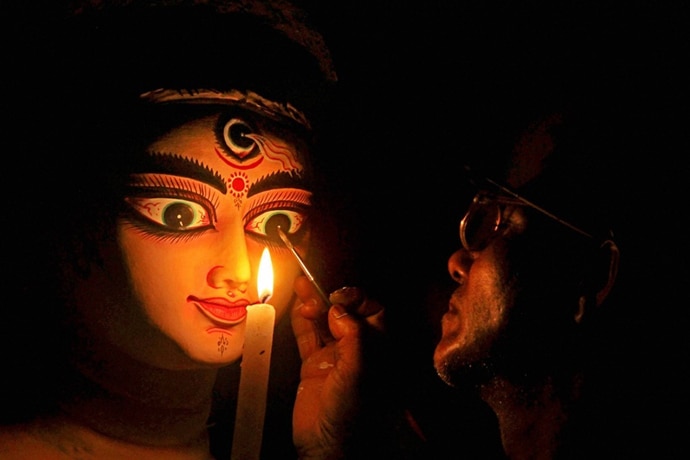 During the days of Jaintia kings, human sacrifices were offered to Durga at this shrine. (Photo: PTI)

Could the healing have come from spirit possession? Could it be a spirit, lingering at the shrine? One who stepped into a weakened, ailing body, when the grip of its owner was waning, and in giving back health to the body, taken up residence within it?

Even today, as the stain of blood lingers high in the Jaintia Hills, and the chime of bells resonates across the mountains, a primeval power from ancient times guards a portal to another world.

Post your comment
#Durga, #Jaintia hills, #Human sacrifice, #Meghalaya
The views and opinions expressed in this article are those of the authors and do not necessarily reflect the official policy or position of DailyO.in or the India Today Group. The writers are solely responsible for any claims arising out of the contents of this article.