Lynching is a lynching: The next Junaid Khan could be anyone

To profile the attacking mob on the basis of age, religion, political affiliation shifts the focus from the bigger problem.

A 16-year old, his body soaked in blood, his head cradled in his brother’s lap, died on a railway platform. The haunting image is splashed across news websites. Before he ended there he was beaten and thrashed and stabbed by a mob that materialised out of a seemingly normal crowd of commuters in a railway compartment.

The altercation, reportedly, was about seats.

Before it took this gory turn, Junaid, the victim — a Muslim, and his brothers were called beef-eaters and anti-nationalists by the assailants. The reason why the incident became a trigger point for #NotinMyName protests, and discussion on rising violence by cow vigilante groups. But was this particular incident really about cow or beef? Or was it another mob with the confidence to make a mockery of law and dissolve unidentified in the crowd. Just like in Jharkhand, in Uttar Pradesh, in Rajasthan, in Kashmir, in Nagaland (remember Dimapur lynching), and many other places.

I choose to ignore the debate about whether the protests were spontaneous or not, or whether they were successful or not, because it adds no value to the bigger discussion around mob lynchings, which is much graver to be kept silent about. 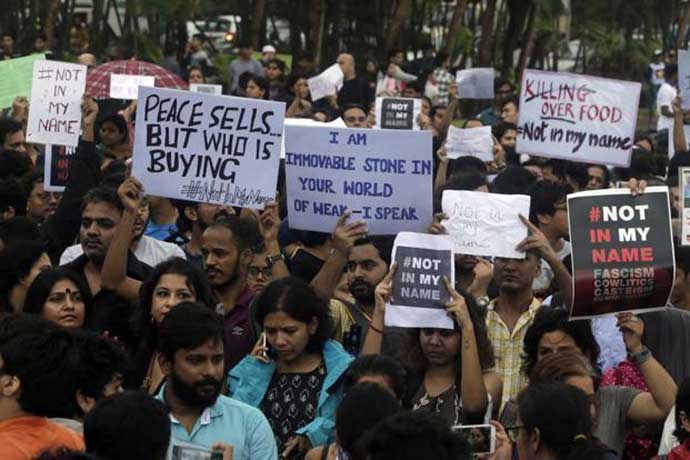 They looked at lynchings selectively, focusing mainly on Muslim victims, making it a Hindu versus Muslim issue.

Even if it wasn’t a simultaneous public protest, at least it brought to fore the public sentiment on lynchings: That we cannot watch in silence as people are victimised and battered to death by mob with no fear of law. And if nothing, it’s made the PM take notice and condemn cow-related violence.

There have been split reactions about #NotinMyName protests. I pick two main arguments, of support and criticism, of the widely held protest, from the public discourse:

Applaud: The protests were the first time private citizens assembled to protest the lynchings

Criticism: They looked at lynchings selectively, focusing mainly on Muslim victims, making it a Hindu versus Muslim issue.

A "lynching map" shown on the protest site has been widely circulated. It excludes the case of deputy superintendent of police Mohammed Ayub Pandith beaten to death outside a mosque in Kashmir by a mob.

It excludes lynching of atheist Faruq in Kerala. Excludes political lynchings. Leading to criticism of being selective.

Even if it is partly true, trashing the protests on this ground, or doubting its intent, is a bit too harsh. There has been a spurt in cow-related violence, and we don’t need to study some secret document to see that.

The venom that the cow-vigilantes pour in the name of cow-protection is troubling. It begun with beef ban and has reached a point where anybody can beat up anybody to settle scores and hide behind the bigger "nationalist" agenda of protecting "mother cow". Precisely what happened with Junaid.

Citizens, as Mitali Saran said in her scathing piece, can join the dots for themselves and many of them don’t like what they see.

It’s happening more. It’s being reported more. But for some reason, in the general public discourse, condemnation of lynching is focusing mainly on cow-related violence, while ignoring the bigger problem of mob violence, which even when not in this extreme form, is worrying.

It was a mob that beat deputy SP Pandith in front of a mosque in Kashmir. A mob with the confidence that it can take a life and get away with it.

It was a mob that lynched seven in Jharkhand over rumours of child-lifting. With the intent to teach them a lesson, and well aware of the advantage of anonymity.

It was this “teach a lesson” rage that led a mob in Rajasthan to strip a 25-year old, thrash and torture him for having affair with a girl of the family. We have seen a case of mob dragging a rape accused out of a police station and lynching him to death (Dimapur). A 17-year old girl being brutally molested and stripped by a crowd (Guwahati). And then there are hundreds of cases of women being branded “witch” and lynched every year; data puts it to a death every third day!

In 2015, five women in a Jharkhand village were lynched to death one-by-one. What surprised the police was the make of the crowd: It included teenagers, college-going youth.

Which was true in Dimapur lynching, in Dadri lynching, in Guwahati molestation and in many other similar cases.

A lynching is a lynching

While the idea behind the protest might be to bring focus on the anxiety of normal citizen on cow-related violence, omitting other cases of mob brutality won’t help the cause. Because:

(A) Cow-related violence is more about politics and keeping an issue burning than about beef; today it’s about beef, tomorrow about something else.

B) Mob violence is more prevalent than what recent cases of lynchings project, and they too should make us equally anxious.

One lynching cannot be less gruesome than the other. That people — with political motive or not — have the confidence to commit it with such disdain is the real worry. A murder is a murder. A lynching is a lynching, over beef, over road rage, over love affairs, over a crime, over rumour, or whatsoever reason.

To profile the attacking mob on the basis of age, religion, political affiliation shifts the focus from the bigger problem. Lynchings will not stop because all that a rabid mob needs to charge at people is an excuse, and the advantage of anonymity. The larger the crowd, the bigger the advantage.

The focus needs to move to the culture of mob violence itself, which is very much a law and order issue. It needs state willingness, and police’s commitment to tackling it with an iron fist.

Because though it looks more like a cow-vigilantes versus minority thing, the reality is that the next Junaid could be anybody — with a skull cap or not — in any situation, at the wrong time, wrong place, among wrong people.

#Mob violence, #Junaid Khan, #Not In My Name
The views and opinions expressed in this article are those of the authors and do not necessarily reflect the official policy or position of DailyO.in or the India Today Group. The writers are solely responsible for any claims arising out of the contents of this article.