Mother defends 'obscene image' of father with baby in shower

Photograph by Heather Whitten that Facebook took down has sparked debate over depiction of intimacy.

Depiction of love, particularly in this age of 24X7 hyper-connectivity and social media, can be a tricky business. Especially, if the portrayal is slightly offbeat, unconventional in its handling of a routine, taken for granted subject - parenthood.

Social media is abuzz with an image of a father cradling his baby son in the shower which Facebook had taken down as per its nudity policy. The photograph, clicked by Arizona-based amateur photographer, Heather Whitten, shows Thomas Whitten, the father, sitting in the shower-tub with baby Fox Whitten in his arms, ostensibly holding him close and under the pouring water to bring his fever - caused by an unwitting Salmonella poisoning - down. 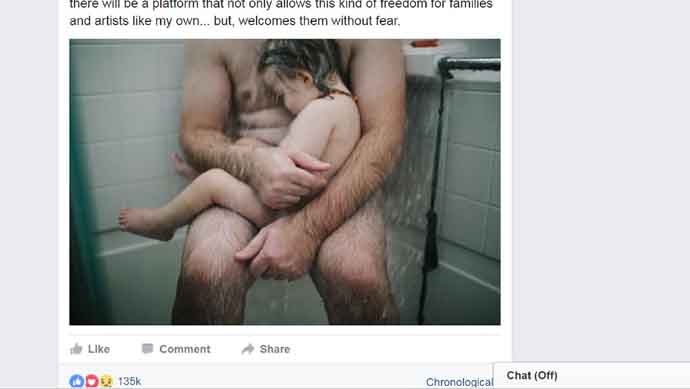 This intimate picture, which Facebook thought violated its nudity policy, and subsequently reposted by Heather Whittens explaining its context in a beautiful note, is something of a masterpiece.

Not only does it defamiliarise a very familiar scene - that of a father bathing his child - by turning it into a photograph, thereby dragging intimacy out of its safe confines of familial privacy, it also challenges conventional norms of what comprises offensiveness and its blurred boundaries of art and a family photo album of a social media post.

The picture has gone viral, with over 31,700 shares online, but has also drawn attention to how an unconventional portrait of paternity can throw the baby out with the bathwater, literally. The notions of inappropriateness are derived from social conventions that are constantly pushed outwards and questioned, while some refusing to go away with dogmatic insistence on morality.

A similar picture was posted about a month back by Kelli Bannister, a photographer, whose runs the Facebook page The Barefoot Mum, in which she is seen holding her baby daughter Summer in the shower because the latter was ill and coughing incessantly. Bannister, too, put up a note explaining the mirth and ambiguities of sharing such an intimate moment on social media: "This morning as Summer was coughing, being sick and working herself up into a frenzy, my Mumma instincts kicked in and I put us both in the shower, with the soothing sound of running water and the warmth touching our skin, she was calm within minutes......then, my 5 year old came in and snapped this!! Such a raw emotive moment of Motherhood in all her glory."

Can we reduce depictions of paternity and maternity to mere nudity? The same principle applies to photographs of childbirth, breastfeeding and other moments of extremely raw emotionality coupled with the full physicality of the parent and child. How can we separate the bodily from the emotive in an experience that is so intimately entangled in both?