Sex and non-veg? Government has some needless advice for pregnant women

Ayush ministry's misleading advisory can seriously affect the health of both mothers and unborn babies.

If you haven't had your day's share of laughter over sanskari tweets and "organic" advisories from the government, here you go.

Pregnant women should stop eating meat and having sex, avoid bad company, have spiritual thoughts and hang some good and beautiful pictures in their rooms to have a healthy baby.

This is, according to a Hindustan Times report, the Ayush ministry's prescription for pregnant women in India.

The Department of Ayurveda, Yoga and Naturopathy, Unani, Siddha and Homoeopathy, or Ayush Ministry, gave these "valuable" recommendations as part of a booklet — Mother and Child Care — compiled by the government-funded Central Council for Research in Yoga and Naturopathy (CCRYN) in the run-up to International Day for Yoga on June 21.

But wait, the joke doesn't end there.

Just as rationalists started to question the BJP's intentions behind promoting such unscientific theories in healthcare and other areas, ministry authorities jumped to clarify that these were just suggestions and not prescription.

Dr Ishwara Acharya, director in-charge of CCRYN, also denied advising against having sex. He categorically said: "'Non-veg should be avoided during pregnancy. Never wrote sex must be avoided.''

Non-veg should be avoided during pregnancy. Never wrote sex must be avoided: Dr.I Acharya,Central Council for Research in Yoga& Naturopathy pic.twitter.com/2jc9gwdlXy

Even though Acharya tried his best to clarify the miscommunication, he perhaps didn't realise that the clarification  was more absurd than the original advisory.

Although one doesn't need to be a gynaecologist to know that the suggestions are unscientific, it certainly gives everyone one more opportunity to figure out/reconfirm the regressive and prejudiced thought process behind such outrageous moves. 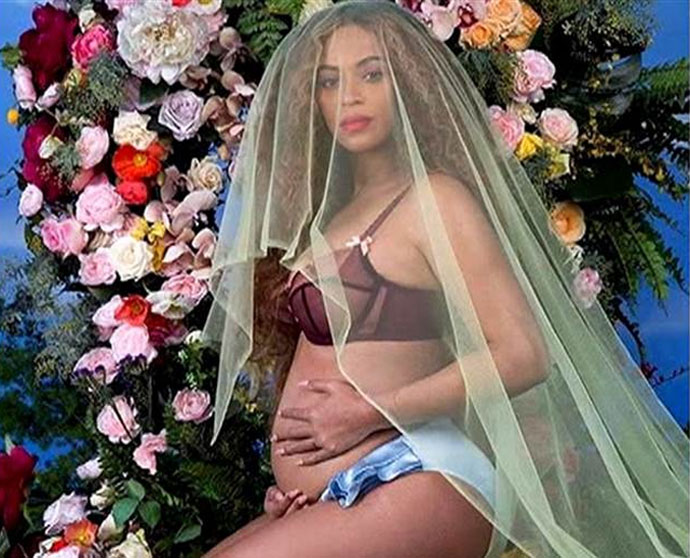 Clarification: This picture is not from Ayush's Mother and Child Care booklet, but an iconic photo of Beyonce that the singer had released earlier this year to announce her pregnancy.

Just last month, a report in The Indian Express "exposed" the Rashtriya Swayamsevak Sangh's decade-old project to “customise” babies and ensure they are “tall and fair”.

The Garbh Vigyan Sanskar project of the RSS’s health wing Arogya Bharati has been associated with an “ambitious programme” with nods from top RSS office-bearers to help Indian women deliver what they have termed the “uttam santati” – the perfect, “customised child”.

The prescription, among other advices, included: “Three months of shuddhikaran (purification) for parents, intercourse at a time decided by planetary configurations, complete abstinence after the baby is conceived, and procedural and dietary regulations.”

In 2015, yoga entrepreneur Ramdev, known to be very close to the ruling BJP, was in news for his Divya Putrajeevak' medicine.

Ramdev's Divya Pharmacy apparently was manufacturing the medicine that claimed to ensure a male child for couples who couldn't conceive.

Even though the CCRYN made a lame attempt to clarify that it never advised against having sex, the Hindustan Times report clearly mentioned that "page 14 of the booklet has a paragraph which says 'pregnant women should detach themselves from desire, anger, attachment, hatredness and lust…(sic)'".

The HT news report also carried a screenshot of the page from the controversial booklet, which was released by minister of state for Ayush, Shripad Naik.

Medical practitioners across the world would agree that a pregnant woman needs more calcium, iron, protein and folic acid than a woman who is not expecting. And non-vegetarian food (let's take the name, meat/fish/eggs) are a rich source of both protein and iron.

“The advice is unscientific. Protein-deficiency malnutrition and anaemia are health concerns for pregnant women and meats are a great source of both protein and iron, which is better absorbed from animal sources than plant sources,” gynaecologist and obstetrician Malavika Sabharwal of the Apollo Healthcare Group was quoted as saying by the newspaper.

As far as sex is concerned, there is no need for abstinence under normal pregnancy.

"Caution is advised during the first trimester when the placenta is low-lying and for complicated pregnancies, where there is a miscarriage risk," Suneeta Mittal, director of the obstetrics and gynaecology at Fortis Gurgaon told the same newspaper.

So, sanskari sarkars issuing such misleading advisories are no longer funny because this may seriously affect the health of both mothers and unborn babies. And we have not even started talking about the suffocation and asphyxiation dangers posed by such toxic attempts to saffronise a nation.