The court said MJ Akbar is not a man of stellar reputation, and that even a man of social status can be a sexual harasser.

A villa has been converted into a jail. But jail is a jail even if made out of a villa. Stuck inside this jail is Sheikha Latifa. Sheikha is the daughter of Sheikh Mohammed bin Rashid Al Maktoum, the ruler of Dubai. Why is the ruler not helping her get out? Because it is the ruler who caged her inside after abducting her from outside. Latifa made the revelation in a video, which she managed to get out with a help of some people fighting for her freedom. Sheikha Latifa has released a video saying she is being held captive in a villa. (Photo: Wikimedia Commons)

The BBC published a video it said was of Sheikha Latifa, the daughter of one the rulers of Dubai, saying that she was being held against her will in a barricaded villa https://t.co/knD22eXbHm pic.twitter.com/SSkTjKSYKe

In March 2020, a London High Court judge said he accepted that Sheikh Mohammed abducted Sheikha Latifa. The judge also accepted the other charges the ruler’s ex-wife Princess Haya, who happened to be his sixth wife, made against the ruler. The ruler, of course, refuted all the charges. We will not get into all the charges, but the particular charge of abduction. Sheikha Latifa tried to escape the ruler and enter India, from where she wanted to fly to the US. To get to India, she chose the water way.

She started on February 4, 2018, on an inflatable boat and jet ski and then reached a US-flagged yacht. Eight days later, under an unacknowledged deal, Latifa was removed from a boat off the coast of Goa by Indian marine commandos. The commandos got to the yacht and Latifa hid in the bathroom. The commandos hurled smoke grenades, which forced her to reach the deck. It was here that she was held. The operation took place on March 4, 2018, and involved three Indian Coast Guard ships, including patrol vessels — Samarth and Shoor, helicopters and a maritime surveillance aircraft about 50 km off the coast of Goa. It is said the extradition of Christian Michel, the alleged middleman in the Rs 3,600 crore AgustaWestland helicopter deal, was a quid pro quo for the return of Latifa to her father, the ruler.

So, Latifa continues to be in the villa-turned-jail but Nikita Jacob has got a three-week relief from jail in the toolkit case. The relief came from the Bombay High Court for Nitika, who is herself a lawyer. Disha Ravi, you know, continues to be under arrest, while a non-bailable warrant has been issued again Shantanu Muluk, an engineer, for creating and spreading the toolkit on the farmers' agitation which was later shared by Greta Thunberg.

If the Delhi Police failed to get custody of Nikita and Shantanu, it secured the arrest of Moni, who is said to be the most-wanted of all those wanted in the Republic Day violence case. The man, if you remember, was seen performing stunts with swords at Red Fort that day. Which day? Republic Day. 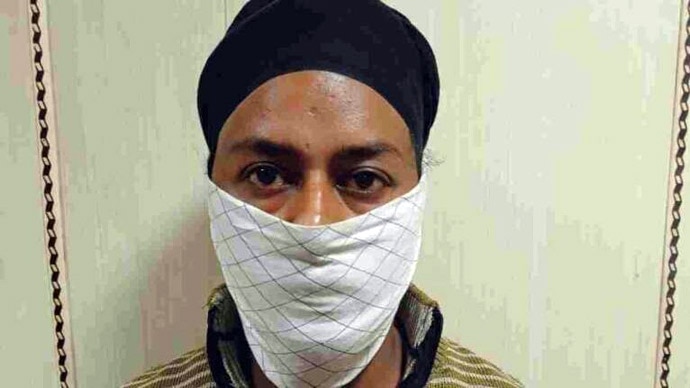 Maninder Singh after his arrest.

#WATCH: Delhi Police Special Cell arrested Maninder Singh, wanted in connection with Red Fort violence. He was arrested from Pitam Pura & 2 swords were recovered from his house in Swaroop NagarVisuals from Jan 26 where Maninder Singh was seen brandishing 2 'khandas' at Red Fort pic.twitter.com/Tr51IyGLWe

The police have also recovered two swords from Moni, aka Maninder Singh, but it can’t be confirmed if they are the same swords seen that day. There is no need to confirm it either because it ain’t no murder weapon. Moni used the swords as props atop Red Fort and police say the sword-dance motivated more people to cause more mayhem amid the mayhem.

Why didn’t a dance motivate more people to dance is not known, but our guess is that some would blame it on the protesters having two left feet since the protests are alleged to be instigated by Leftists. We will not get into the Left and Right of it because we prefer to go straight. So, let’s go straight to the word sword, the Word Of The Day. Sword comes from Proto-Indo-European word seh₂w, which meant sharp. Oxford dictionary says, a sword is a weapon with a long blade and handle. A double-edged sword is more dangerous than a single-edged one for obvious reasons. It can injure your enemy and injure you too. Proverbially, a double-edged sword is something that has or can have both favourable and unfavourable consequences.

Marrying a Dalit woman could turn out to be the proverbial double-edged sword for Congress leader Rahul Gandhi. Union minister and Dalit leader, Ramdas Athawale has said that his ministry will provide Rahul with Rs 2.5 lakh if he marries a Dalit. He may get the money, but what is money for a single person who wants to remain single? Whatever Rahul gets, or decides not to get, Athawale has got the attention he tries to get by making such attention-seeking statements.

Journalist Priya Ramani, meanwhile, got acquittal in the #MeToo defamation case filed by former Union minister MJ Akbar. Ramani had said she was sexually harassed by Akbar. Akbar, in turn, sued her for defaming him saying Priya Ramani caused damage to his "stellar reputation" by accusing him of sexual harassment in an article written in 2017 and a tweet posted in 2018.

The Revenue House Court, which was hearing the case, said: "Even a man of social status can be a sexual harasser." Most importantly, the court said, “MJ Akbar was not a man of a stellar reputation.” That put a legal seal on Akbar's reputation.

Post the verdict, Ramani said: "Sexual harassment has got the attention it deserves. Despite the fact that it was me the victim, I had to stand up in court as an accused. I thank everyone who stood by me, especially my witnesses. I thank the court for this verdict, my lawyer Rebecca John and her team who believed in me. They put their heart and soul in this case." While Ramani won big in the case, Congress made a clean sweep in Punjab, winning all seven municipal corporations. The party bagged all the civic bodies for which the results were declared today: Moga, Hoshiarpur, Kapurthala, Abohar, Pathankot, Batala and Bathinda.

So that should bring much-needed relief to Congress, which is facing a crisis in Puducherry with the party landing in a minority in the 28-member Assembly. Congress wants more MLAs, and members of Shri Ram Janmabhoomi Tirtha Kshetra want no more silver bricks for the construction of Ram Mandir. Silver bricks can’t be used to make the mandir. They can be sold for money which can be used in temple construction. But the Trust says there is no place to place the silver bricks.

The donation drive for the Mandir, meanwhile, has drawn criticism with many, including former Karnataka CM HD Kumaraswamy, alleging they are being forced to donate. Donation is voluntary. What is taken forcibly is extortion. Extortion is illegal.

If you want to watch a movie on the life of those doing illegal things, we recommend GoodFellas based on the true-crime book Wiseguy by American journalist Nicholas Pileggi. The movie is on Netflix so watch it before you can arrange the book — by buying or by borrowing. If you borrow to read, do remember to return.

Also, remember to keep the mask in the right place because cases of coronavirus are rising in some regions.

#Nikita jacob, ##MeToo, #MJ Akbar, #Priyaramani
The views and opinions expressed in this article are those of the authors and do not necessarily reflect the official policy or position of DailyO.in or the India Today Group. The writers are solely responsible for any claims arising out of the contents of this article.