The 21-year-old college student was just passing by when she was stopped at an accident spot involving a Sudanese man.

The horrifying side of India's repeated recourse to "mob justice" came to light once again when on Sunday last a frenzied group in Bangalore assaulted, stripped and paraded naked a 21-year-old woman student from Tanzania because she happened to be at the same spot where an accident, caused by an African (Sudanese) man on the wheels), had occurred just 30 minutes back.

The young, second-year BBA student at Bangalore's Acharya College, was driving by when she was stopped by a large crowd which had gathered at the spot where a 35-year-old resident of Hesaraghatta was run over and killed, allegedly by a Sudanese man's car.

The Tanzanian girl, who was driving a Wagon-R, along with four of her friends, was dragged out after her car was surrounded, and then was beaten up, stripped of her clothes and assaulted by the angry mob. Reports say despite police presence at the location, all the cops did was stand and watch as the girl was subjected to the most brutal and humiliating experience of her life.

Obviously, the reason why the Tanzanian girl was assaulted for a crime committed by a Sudanese man completely unrelated to her is because they both happen to be African. Not only does this incident highlight the grotesquely racist side of India, but also how grossest displays of misogyny have become quite the norm nowadays. 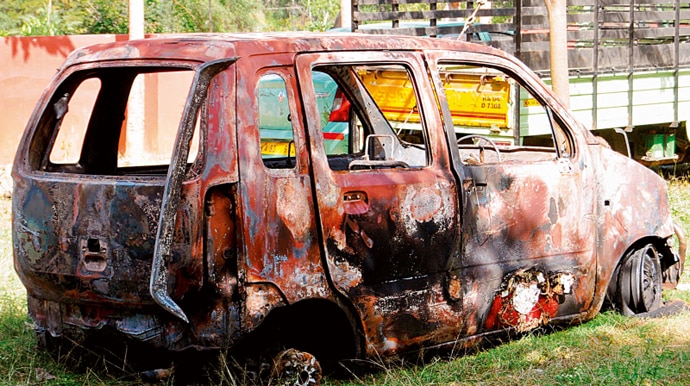 Torched car of the Tanzanian student.

Reports say that even the car of the student was torched, while another man, who tried helping the Tanzanian girl by offering her a T-shirt, was also beaten up.

Naturally, the African population in Bangalore, which comprises a huge number of students, is extremely distressed. Tanzanian embassy has asked for a detailed investigation into the matter which has exposed the seamy underside of globalising India.

Even as PM Narendra Modi courts major leaders of the African Union in the national capital, India will take a long time to cure its own racism.