The big Rajkummar Rao and Patralekhaa wedding is winning hearts all over the internet. In a recent viral video from the wedding, you can see Patralekhaa filling Rajkummar's maang with sindoor.

A video from Bollywood stars Rajkummar Rao and Patralekhaa's wedding is going viral (for all the right reasons). After hearing Rajkummar talk about Patralekhaa, their 11-year relationship and all, you get to the most unusual part. Watch the video first.

THE HIGHLIGHT: In the short video, Rajkummar fills Patralekhaa’s maang. Then he breaks away from tradition. He says, "Tum bhi laga do." Sindoor, that's what Rajkummar was asking Patralekhaa to apply on his forehead. As per Hindu tradition, the groom fills the maang of the bride with sindoor during the ceremony. Towards the end of the video, you can see both Rajkummar and Patralekhaa filling each other’s maang with sindoor.

THIS TIME, IT’S DIFFERENT: From Sabyasachi’s mangalsutra campaign to Alia Bhatt’s Kanyamaan ad, out-of-the-box ideas during Hindu ceremonies have mostly sparked controversies all the time. But this time, it was quite a surprise to see folks on Instagram applauding the actors for what they did.

Unlike the previous incidents, this one received comments like “the cutest thing ever”. Here are some of them: Some more comments from Bollywood stars on Rajkummar Rao’s post

THE BIG BOLLYWOOD WEDDING: Rajkummar and Patralekhaa tied the knot on November 15. 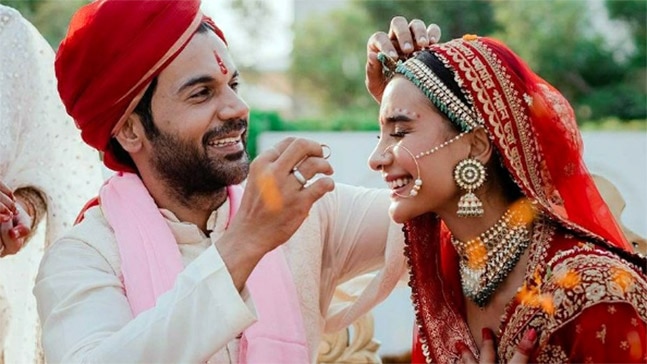 A picture from Rajkummar Rao and Patralekhaa wedding. Photo: Instagram/rajkummar_rao

“Raj, it's been 11 years but I just feel like I know you since a lifetime and not only this lifetime. I am sure it has been many lifetimes,” Patralekhaa said while exchanging their vows. Rajkummar responded with, "It’s been 11 years but it still feels like we have just started dating. We are soulmates and I truly, truly believe that."

Then, in what reminded many of Virat Kohli’s famous ‘my wife’ remark on his wedding day, Rajkummar too said, “Thank you for being my wife!”

#Patralekhaa, #Rajkummarrao wedding video, #Rajkummar rao wedding, #Rajkummarrao
The views and opinions expressed in this article are those of the authors and do not necessarily reflect the official policy or position of DailyO.in or the India Today Group. The writers are solely responsible for any claims arising out of the contents of this article.