Soil from Kolkata was brought to Ayodhya for the Ram Mandir Shilanyas event today by the kin of Ram and Sharad Kothari.

The coronavirus pandemic forced several curbs on the event but India lived up to the challenge, said Prime Minister Narendra Modi, playing jajmaan at the bhoomi pujan today in Ayodhya. The challenge to host the puja amid the pandemic was actually taken by the Uttar Pradesh administration that increased PM’s call for ‘do gaj ki doori’ to 8-feet distance between the attendees. Narendra Modi during the bhoomi pujan in Ayodhya. (Photo: ANI)

That was the plan but then the attendees had their own plans and were seen executing it to precision by talking to each other from close quarters, some even wearing the masks exactly the way no one is supposed to wear a mask. 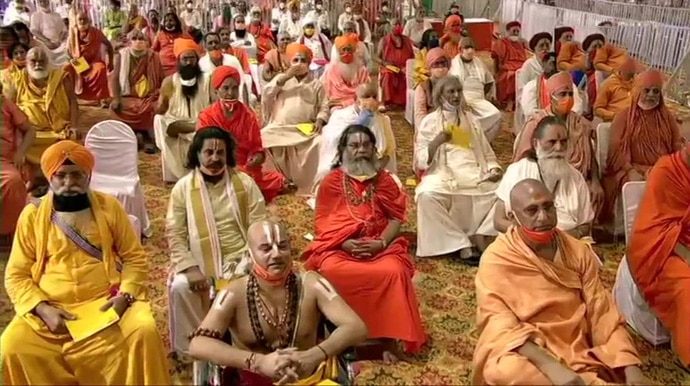 While this happened at the venue of the event, Ayodhya residents were largely joyous hoping that the temple would bring economic activity to the region which has over the last so many years seen only politicians and politics.

There has been a lot of violence too. Remember the 1990 firing on the kar sevaks? Official records said 16 people died in the firing on October 30 and November 2. But later it was revealed that 28 were killed. The event saw Mulayam Singh Yadav lose his Chief Ministership in the 1991 assembly elections. More significantly, the firing led to a pro-Hindu wave which saw Kalyan Singh take over the CM’s chair. This was the first time UP got a BJP CM.

So, the firing proved to be an important turning point. Let us explore this point a little further. Two brothers had come to Ayodhya back then from Kolkata, in the October of 1990. One of them coincidentally was named Ram. The other was Sharad. So Ram Kothari (23) and Sharad Kothari (20) were in Ayodhya to start building the temple. Remember, bricks have been coming to Ayodhya for years now for the temple. On November 2, 1990, Ram and Sharad were shot dead from point-blank range by the UP Police. Ram and Sharad Kothari were killed in Ayodhya in November 1990.

The Kothari brothers’ killing led to outrage among Hindus across the country. So far the mandir movement had looked a north India specific movement, but the killing of the Kolkata boys drew the attention of people, especially youths, from across the country to the movement.

The kin of Ram and Sharad were today in Ayodhya with soil from Kolkata to be made part of the Ram Mandir.

So you see Ayodhya has silently witnessed so much, including the demolition of the Babri structure. What else can Ayodhya do? We mean cities and villages can only witness what is happening in cities and villages. They have no comments to offer. Good thing, since the last thing we need is more comments.

This is however not about comments. This is about Ayodhya. Ayodhya is set to get a makeover with a Ram park and a Ramayan circuit. All in all, it is expected to get a big tourism boost. That is not going to happen before the pandemic is gone and the temple is built. By the time the temple is ready, we expect the pandemic would be history.

Ayodhya will still be silently watching because Ayodhya is ‘invincible’, at least that is what it means. Ayodhya, our Word Of The Day, is derived from the Sanskrit verb ‘yudh’, which means "to fight, to wage war". Yodhya is the future passive participle, meaning "to be fought". It is ‘a’ that turns the meaning on its head. A + Yodhya is one which is ‘not to be fought’ or one which is ‘invincible’.

It seems at least the political fight over Ayodhya has ended with all parties now joining the chorus of ‘Jai Shri Ram’.

PM Modi, of course, attempted some gender justice by chanting “Jai Siya Ram”, making the event about both Ram and Sita. We can’t confirm whether this was intentional or purely coincidental.

But the Central Bureau of Investigation (CBI) will try to confirm whether Sushant Singh Rajput’s death involved a larger conspiracy. The Centre told the Supreme Court that it has accepted the recommendation from Bihar government to hand over the case to the CBI.

Sushant’s ex-girlfriend Ankita Lokhande has hailed the CBI investigation saying, "The moment we have waited for has finally arrived."

Whether the moment stays will be decided next week by the Supreme Court.

For now, there are four parties to the case in Supreme Court – the Centre, the Bihar government, the Maharashtra government, and Sushant Singh Rajput's former girlfriend Rhea Chakraborty. All three have three days to file their replies before the SC.

The Maharashtra government has been granted three days to file its report on the investigation.

So the SC will hear the case on who will investigate the matter only next week. Until then, the Mumbai Police have asked people who might have information on the Disha Salian case to come forward and share it with them.

Sharing is caring but please do not try to share half-baked Twitter info and WhatsApp gyaan. Not with Mumbai Police, not with your dear ones. This will only hamper investigations.

But investigations are underway over what led to the Beirut blast that left over 100 people dead and thousands injured. The blast has left nothing of the port that once was. It is said the noise created by the blast was so loud it was heard over 235 kilometres away in Cyprus too.

Initial investigation suggests the blast was caused by over 2,700 tonnes of ammonium nitrate that was confiscated from a ship in 2014. Imagine it was lying there at the port since 2014 and went off in 2020 because 2020 is the year when it is all supposed to go up in flames. Metaphorically too.

What the hell is this? Extensive explosions with an unmatched impact, you can see.May Allah protect people of #Beirut pic.twitter.com/8Nvs3RQk38

Beirut will now investigate the matter. But Bihar Police says it can’t investigate anything because their prime suspect Rhea Chakraborty is ‘missing’. Maybe CBI can find out where she is when CBI finds out whether it can investigate the case or not.

From Mumbai, let’s take you to Mehbooba Mufti’s Kashmir. Now, Kashmir is not just hers but she is one of the last remaining leaders still in detention since Article 370 was abrogated last year in Jammu and Kashmir. We mention Mufti today because she tweeted today calling last night’s lifting of the curfew on the abrogation anniversary a ‘hogwash’.

Last night’s order withdrawing curfew was hogwash. When it comes to collective punishment,J&K admin & police prefer not leaving a paper trail & yet ensure people are caged by imposing an unofficial curfew https://t.co/vNUB0gc0op

Mehbooba will come out of detention when the government decides to take her out but Mama is out of hospital. Mama who? Madhya Pradesh Chief Minister Shivraj Singh Chouhan. The CM has beaten the virus and is now going to be in self-isolation for a while.

You stay in if going out isn’t a must. And if you can’t stay in, stay away from people. Remember what the PM said today, “Do gaj ki doori, mask hai zaroori.”

#Ayodhya, #Narendra Modi, #Jai shri ram, #Rammandir
The views and opinions expressed in this article are those of the authors and do not necessarily reflect the official policy or position of DailyO.in or the India Today Group. The writers are solely responsible for any claims arising out of the contents of this article.