The special permission given to the Dera chief to use the reserve lounge across airports was withdrawn only on September 1.

The prime minister also added that "these symbols are out of touch with the spirit of new India", suggesting that it should have done away with long back. While egalitarianism is loved by the common man, the prime minister was seemingly playing to the gallery. But was the Modi government actually practicing what it was preaching?

Sample this: On April 7, 2015, the government had given permission to use the reserved lounge at airports across India to a rape and murder accused. Yes, you read it right. Almost a year after coming to power, the BJP-led government had given this special privilege to Gurmeet Ram Rahim Singh, chief of Dera Sacha Sauda. Ram Rahim Singh, who is in jail now, was a rape and murder accused at that time.

This was revealed to me by the Ministry of Civil Aviation in response to a query filed under the Right to Information Act.

The prime minister, the president, the head of foreign governments, the cabinet secretary and MPs are among those allowed to use VIP lounges at Indian airports. But why was Ram Rahim Singh accorded the special favour? 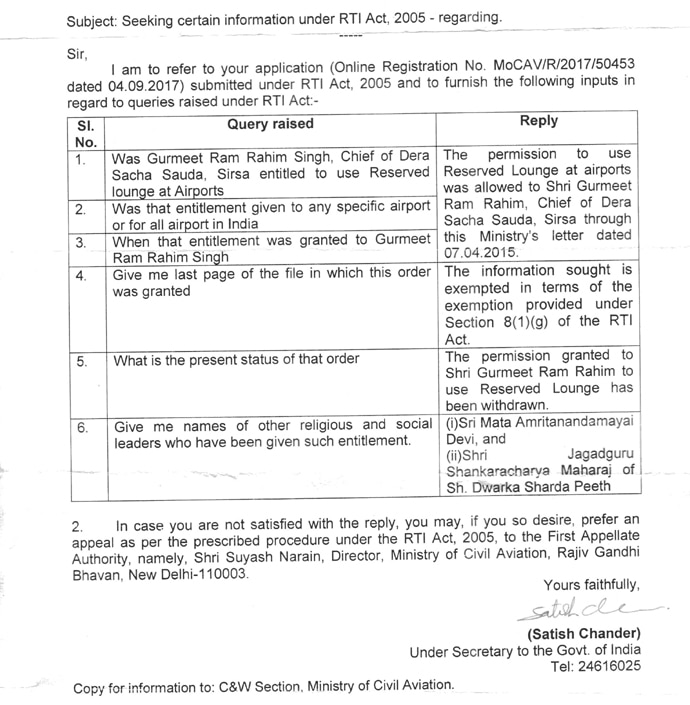 The Ministry of Civil Aviation's response to query filed under the Right to Information Act.

Well, his importance in BJP’s schemes of things can be gauged from the fact that only two other religious or social leaders have been granted this facility on Indian airports - Mata Amritanandamayi Devi and Jagadguru Shankaracharya of Dwarka Peeth. This too was revealed to me in response to the RTI.

In fact, spiritual guru Sri Sri Ravi Shankar and yoga guru Ramdev - both with much bigger following than Gurmeet Ram Rahim - too have not been given this facility. And this despite the fact that just like Ram Rahim Singh, both of them have directly or indirectly campaigned for Modi in the 2014 Lok Sabha elections.

What is more surprising is that the government continued the special privilege to Ram Rahim even after the April 19 announcement when the PM said every Indian is a VIP. It was finally taken away on September 1, after the chief of Dera Sacha Sauda was sentenced to jail for 20 years by a CBI court for rape.

The RTI response clearly shows that Ram Rahim Singh, until his conviction, was "more important" to the BJP and Narendra Modi - perhaps even more than Sri Sri Ravi Shankar and Ramdev. But why? This is again something that only the BJP can answer.

#RTI, #BJP, #Modi government, #Ram rahim Singh
The views and opinions expressed in this article are those of the authors and do not necessarily reflect the official policy or position of DailyO.in or the India Today Group. The writers are solely responsible for any claims arising out of the contents of this article.