With the introduction of Korean American character Ji-Young on Sesame Street, Western TV has made an active effort to educate children about racism and hate crime. Take a look at 5 other popular children's shows that make a political statement.

Globally popular PBS show Sesame Street announced the introduction of a new Korean American character, Ji-Young, today. The character is 7, loves skateboarding and playing her electric guitar. Sesame Street writers say that they attempt to ‘help young Asian and Pacific Islander children to feel at home in America as much as anyone else’. The puppeteer behind Ji-Young, Kathleen Kim, hopes that the character will teach children how to stand up to bullying, racism, and hateful attitudes or behaviours. This announcement comes in light of multiple hate crimes being committed against the Asian community in the past year.

This is not the first time that American TV is attempting to include diverse characters in its shows. In recent time, multiple children’s shows have begun to showcase LGBTQIA+, racially diverse characters, and characters that break gender roles, in their episodes.

Here’s a compilation of the most popular shows:

DORA AND FRIENDS: INTO THE CITY!

A spin-off of the very popular show, Dora The Explorer, this show follows the adventures of Dora and her five best friends: Kate, Alana, Emma, Naiya and Pablo. The show focuses on highlighting traits such as community service, friendship, and solving problems that are well-blended into the episodes. Dora The Explorer has popularly been known to teach children Latino culture and Spanish, and this spin-off continues to do so. Dora and Friends: Into the City. Photo: IMDB

Other than its portrayal of Latino culture, what makes the show really stand out is how creators have been able to make the spin-off relevant and enjoyable to an older age group too. Dora’s backpack that was originally filled with magical items has been replaced by a fashionable charm bracelet. The character has also become technologically aware now, as instead of calling on a singing map to guide the way, she clicks Map App on her electronic device.

Elena of Avalor features a 16-year-old princess, Elena, who saves her kingdom from an evil sorceress after being frozen in time in a magical amulet for decades. Later on, when she is old enough to take her rightful place as the Queen of Avalor, Elena initially feels ready for the job but then realises how difficult it is to rule a kingdom. The show heavily features Elena's eagerness, determination, integrity, and enthusiasm and also provides the character with a sense of independence. The show is themed upon family, friendship and relationships. 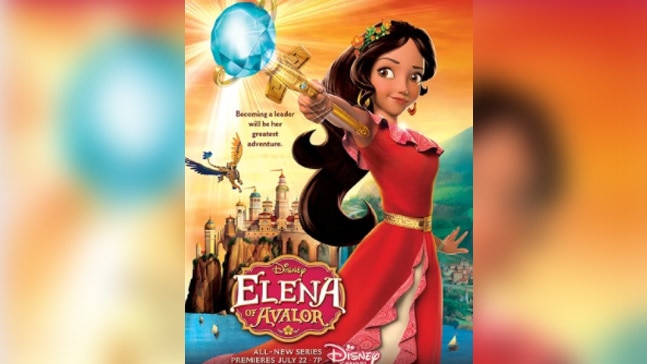 The show is widely popular because of how it shows Elena to be an independent and confident character yet have the wisdom to reach out for help when she needs it. The show also portrays multiple aspects from Latino culture and strong female characters.

Where to watch in India: Disney+Hotstar

Nickelodeon’s legendary show, SpongeBob SquarePants announced during Pride Month 2020 that its namesake character identified as a member of the LGBTQIA+ community. Writers have always shown SpongeBob being comfortable in expressing his emotions, being full of ‘heart’ and having fruitful relationships with city members. This has ultimately resulted in a positive and a widely loved portrayal of a member of the community. Along with SpongeBob, the show also features Patrick, Squidward, Mr Krabs, Sandy, Pearl, Gary the Snail, Plankton and Mrs Puff living in the underwater city of Bikini Bottom.

Celebrating #Pride with the LGBTQ+ community and their allies this month and every month ? ⁣(?: by @ramzymasri) pic.twitter.com/pENmTaQB0h

The show is well known for its comedy, clever jokes, adventures and its ability to talk about life problems with ease. The friendship shown between SpongeBob and Patrick has stood the test of time and taught children how platonic male friendships can be affectionate. The series has been entertaining viewers of all age groups since 1999, and aired for 12 seasons. Deemed as the longest-running children's animated series in the US, Arthur is no stranger to showcasing diverse characters. The show has previously dealt with important issues such as asthma, dyslexia, cancer, diabetes and autism spectrum disorder, and premiered Season 22 in 2019 with the wedding of Arthur's third-grade teacher, Mr Ratburn with Patrick, a local chocolatier. The series airs on PBS Kids and debuted in 1996. It follows the adventures of Arthur, his classmates and his family. The show aslo recently announced the addition of a Sikh boy named Samir as one of its characters.

At the time, Maria Vera Whelan, the senior director of marketing, communications and social media for children’s media and education at PBS told New York Times, "PBS Kids programmes are designed to reflect the diversity of communities across the nation. We believe it is important to represent the wide array of adults in the lives of children who look to PBS Kids every day."

SHE-RA AND THE PRINCESS OF POWER

A reboot of the 1980s original, the story follows the life of of Adora, a teenager who can transform into the heroine She-Ra and leads a group of other magical princesses in a rebellion against the evil Lord Hordak and his Horde. This Netflix original has won praise for its diverse cast and the complex relationship between She-Ra and her best friend-turned-archenemy Catra. What's most interesting about the show is that the fictional universe it is set in is 'casually' LGBTQIA+ inclusive.

As the Los Angeles Times explains, "On Etheria, princesses are just as likely to be married to each other as they are to have boyfriends. Not even the most ruthless villain around has trouble remembering anybody’s pronouns. It’s a planet where gender isn’t constricted, heteronormativity does not exist, and queer people just get to be." She-Ra and the Princesses of Power. Photo:DreamWorks / Netflix

Where to watch in India: Netflix

THE O: Unlike its Eastern counterparts, children's shows in the West have time and again potrayed diverse characters and characters who don't conform to gender roles. With the introduction of Ji-Young by Sesame Street, Western TV has yet again made an active effort to educate children about racism and hate crime. It's time Indian media follows suit.

#Netflix, #Asian american, #Arthur, #Spongebob
The views and opinions expressed in this article are those of the authors and do not necessarily reflect the official policy or position of DailyO.in or the India Today Group. The writers are solely responsible for any claims arising out of the contents of this article.