It is an opportunity for students to understand three big ideas: The idea of multiple identities, the idea of law and the idea of citizenship.

The Supreme Court’s partial scraping of the British-era law — Section 377 of the Indian Penal Code — was an important day, not just for the LGBTQIA+ community, it is also a watershed moment in our journey as an inclusive and equitable democracy.

The ramifications of this judgement are over-arching on our national discourse on caste, opportunity, language, personal liberties, privacy, and more importantly on an Individual citizen’s relationship with the state. Just the way India’s independence (from the British rule) had a salubrious effect on the freedom movements across Asia and Africa, this judgement is bound to have a domino effect on the rights of minorities across the commonwealth and maybe even the 72 countries that still treat same-sex union as a felony. 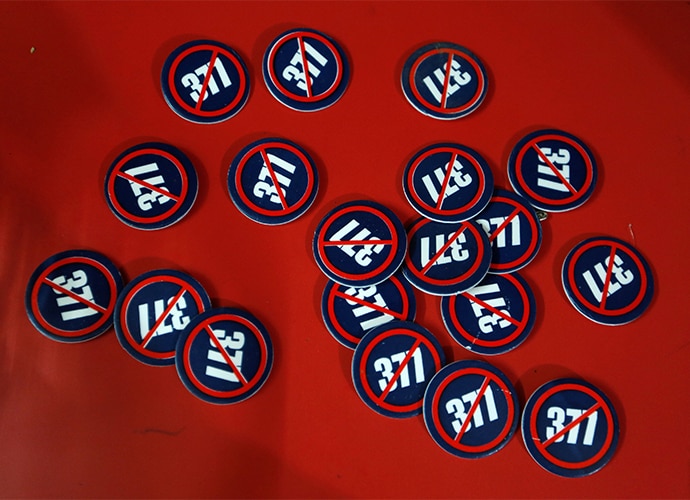 The ramifications of this judgement are over-arching on our national discourse on caste, opportunity, language, personal liberties and privacy. (Photo: Reuters)

But if we want to be sure that we as a nation do not regress back to the myopic and non-egalitarian view of the world, it is crucial that children and adolescents understand not just the Supreme Court’s judgement, but its rationale as well. After all, the hope of a better world resides more in the younger generation.

Perhaps, this judgement could be a rare teachable opportunity for our students to understand three big ideas: The idea of multiple identities, the idea of law and the idea of citizenship.

The Idea of Multiple Identities

This judgement focused more on the sacrosanct identity of an individual than on the physical act of sexuality itself. The identity, even if it represents a minuscule minority, cannot be surrendered at the altars of majoritarian views and public morality.

The core of any egalitarian democracy is in recognising and respecting diversity — diversity in thoughts, perspectives, identities, economic strata and belief systems. The Chief Justice, quoting Goethe, said “I am what I am, so take me as I am,” is an unambiguous reinforcement of this core tenet of our constitution — that irrespective of who we are, we are guaranteed certain inalienable natural rights. And these inalienable natural rights cannot be surrendered to a binary view of life.

This judgement, as observed by the court, is also about rescuing this country’s core values from the worldview imposed by its erstwhile colonial oppressors. A recent New York Times article quips that Indic traditions were very permissive of same-sex love, but this culture of tolerance changed drastically under the British rule.

The ancient Indian languages of Sanskrit, Prakrit and Tamil have over 50 words to describe what today we collectively refer to as “queer”. From the ancient texts like the Puranas and the Upanishads, to more medieval texts like the Kamasutra — references to multiple gender identities, sexual orientations are quotidian. Some of the popular Gods were born out same-sex union and transgender folk were given special political status. This judgement is rescuing this long forgotten narrative of the binary from a morality driven linear narrative.

The Idea of Law

It is essential for students to understand the inherent nature of law — that it is not cast in stone and is mutable.

As Justice Chandrachud points out, much of India’s constitution is influenced by Western constitutions which in-turn are influenced by Judeo-Christian theology. The early theologians built the foundations of the western law based on their theological foundations. The influence and transfer of ecclesiastical law into secular law in the western world brought tremendous progress in recognition of universal human rights (like the abolition of slavery). It is essential for students to understand the inherent nature of law — that it is not cast in stone and is mutable. (Photo: Indiatoday.in)

But some of these laws also denied rights to identities that are contrary to theological foundations — like the biblical stories of Sodom and Gomorrah or the Book of Leviticus. But as Justice Chandrachud observes on article 377, “There is an unbridgeable divide between the moral values on which it [Section 377] is based and the values of the Constitution. What separates them is liberty and dignity”.

Although the British have left, the Raj still persisted.

It is a national shame that it took 71 years for Indian to muster courage shed the colonial artifice of anti-sodomy laws. The framers of the constitution were great visionaries. But they were not infallible. So was their constitution.

The constitution is a living entity and is alive only when it is questioned, challenged, amended and evolve with time. But for that to happen, a thriving culture of citizenship is vital.

The Idea of Citizenship

While the five-member constitutional bench of the Supreme Court has received more than their fair share of credit for this historic judgement, the real heroes (Or she-roes as four of the five lawyers who lead the charge in the courtroom, including the lead lawyer were women) are the activists. It is the activists and lawyers, who despite personal risks, societal ostracism and political apathy, persisted and pursued legal action over the last three decades.

It is naive to expect political parties to bring about adaptive change — like in the case of LGBTQIA+ rights.

It is a national shame that it took 71 years for Indian to muster courage shed the colonial artifice of anti-sodomy laws. (Photo: Reuters)

Lawmakers are influenced more by electoral trends than constitutional rights. Even the venerated mascot of liberal politics of the Western world, Barack Obama, did not take a clear public stand on homosexuality till as late as 2012.

Adaptive change in a society is often brought in by exercising citizenship beyond visiting the polling booth every five years. This generation must know that democracy is never achieved. It is always a slow and a frustrating work in progress.

Legality of same-sex orientation is one thing. But acceptance is far more difficult.

Schools have to do their bit by building capacity for acceptance — one child at a time.

Max Planck, a German theoretical physicist whose discovery of energy quanta won him the Nobel Prize in Physics in 1918, once quipped that a new scientific truth does not triumph by convincing its opponents and making them see the light, but rather because its opponents eventually die, and a new generation grows up that is familiar with it.

Planck is right, only when schools take the effort to build an egalitarian understanding in young and impressionable minds.

Much of what we learn in school is disengaging for there is no relevance to the life of a student. This Supreme Court judgment that has caught the imagination of the nation offers that opportunity to “hook” students on the ideas of multiple identities, constitution and their engagement with it.

These big ideas are far more critical than the syllabus that needs to be covered before exams.

I fervently hope educators create time and space to hold conversations around this landmark judgement. Who knows — maybe some of our students may feel more accepted and step out of the closet.

Post your comment
#Civil liberties, #Educational Institutions, #Supreme Court, #Section 377 verdict
The views and opinions expressed in this article are those of the authors and do not necessarily reflect the official policy or position of DailyO.in or the India Today Group. The writers are solely responsible for any claims arising out of the contents of this article.

The author is an alumnus of Harvard University, and has journeyed from being a management consultant with firms like Grow Talent and Accenture, to becoming the head of senior schools, curating deep learning experiences. He is passionate about scaling and incubating experiential learning schools. In 2009, Vishnu co-authored (along with Swami Mitrananda of Chinmaya Mission) ‘Seeking’ – a travelogue on a 14-day sojourn across the Arabian sea on a cargo ship.