Sex and medals: Does action under the sheets increase performance on the field?

Research has shown that having an orgasm can reduce muscle pain in female athletes while a testosterone boost could even help build strength for men.

Wilt Chamberlain may have been the most dominating basketball player of the planet, but the most enduring myth about Wilt is what he let out in his 1991 autobiography: 20,000 women.

Wilt claimed to have slept with 20,000 women in his life in a time when he was the most famous basketball player in the world, cruising around in a Cadillac every night near his nightclub in Philadelphia.

His book came out at the same time as Michael Jordan's rise in American consciousness. Jordan was on his way to become the most famous sportsperson on the planet and stories of him "hitting club" till 6am on game days and then being an absolute champ on the floor only added to his mythical status.

Sportspersons are the physical peak of what human beings can be.

They're rich, successful, famous with extremely flexible and attractive bodies, which in translation means everyone wants to sleep with them.

The better they are at their sport, the more attractive sex partners they are projected to be.

The question is whether you NEED to have an exuberant sex drive to be an A-list athlete, whether the two go hand-in-hand.

Research has shown that having an orgasm can reduce muscle pain in female athletes while a testosterone boost could even help build strength for men. Have we missed the entire point of sports science?

Should training involve getting laid? A LOT?

Recently, Usain Bolt has been seeing rocking the party circuit OF THE ENTIRE WORLD. The fastest man on earth has been photographed partying with different women, from Rio to London, in the last week. 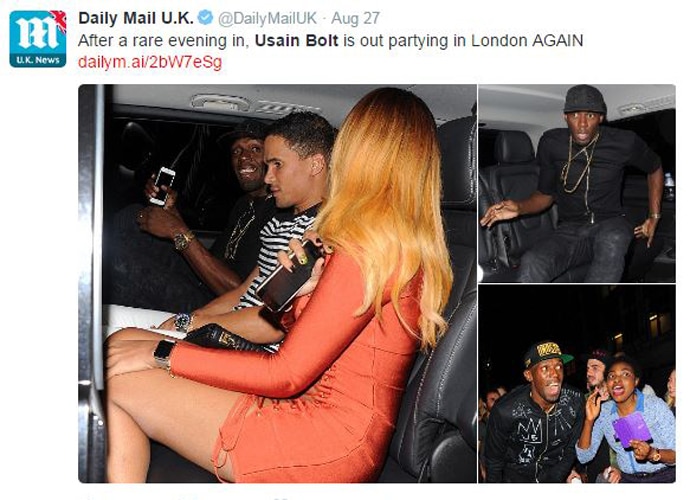 The fastest man in the world has had quite the party these last few weeks and has been in and out of clubs with beauties from around the world.

In that way, the Olympics present themselves as a unique proposition for most athletes as the Olympic games village houses thousands of athletes, all with six-packs and perfect bodies who are ready to let the beat drop after four years of tense, train-till-you-drain preparation. Bolt living it up in Rio. Photo: Twitter (@usainbolt)

The definitive report on "sex at the Olympics", a 2012 investigative piece by ESPN quotes gold medal winning women's soccer goalkeeper Hope Solo, "There's a lot of sex going on." How much exactly?

The now much ridiculed Ryan Lochte has the answer, "I'd say it's 70 percent to 75 percent of Olympians."

"Hey, sometimes you gotta do what you gotta do," he added. Despite his recent transgressions, Lochte has held several world records.

The village is "just a magical, fairy-tale place, like Alice in Wonderland, where everything is possible," says Carrie Sheinberg, an alpine skier at the '94 Winter Games. "You could win a gold medal and you can sleep with a really hot guy."

To branch out, golf legend Tiger Woods was sleeping with about 13 women at the same time, tennis great John McEnroe famously "got around", a lot and to think of Indian examples, umm.. Virat Kohli has a pretty colourful social media presence no? A package of condoms in front of an Australian flag during equipment check of the German Olympic team in Mainz, Germany. Photo: Reuters

At the risk of sounding "anti-national", we would like to pose an alternative to the generally held common-sensical idea of how to ace the Olympics.

To win more medals, Indian athletes should have partied more and used the generous supply of condoms provided in Rio.

Organisers of Rio Olympics provided athletes with a record 4,20,000 condoms to be used this year and how many do you think were used by India's biggest contingent ever?

The most action our athletes got was getting retweeted by Sachin Tendulkar or social media expert Vijay Goel.

Let's get some action under the sheets to see some in the field.

But here's a disclaimer.

A "scandal" broke out in Rio when Brazillian diver Ingrid Oliveira banished her diving partner Giovanna Pedroso from their room so she could have sex with canoeist Pedro Goncalves the night before they were due to dive.They ended last in 10m synchronised diving the next day.