When Kashmir lost its real Wani

An exclusive excerpt from The Real Wani — Kashmir's True Hero, in which the author details the martyrdom of Shaheed Lance Naik Nazir Ahmad Wani.

An ordinary man who lived an extraordinary life of poverty, hardship and glory, The Real Wani — Kashmir's True Hero is based on the life of Shaheed Lance Naik Nazir Ahmad Wani — the first person from Kashmir to be conferred with the Ashok Chakra, India's highest peacetime military decoration award.

It is the story of the twists and turns in a young Kashmiri boy's life as a result of the situations that were beyond his control. Author Sonal Chaturvedi delves into Nazir's life and relationships, and reveals the man behind the soldier, while highlighting the personal sacrifices he had made, willingly, in the line of duty. The Real Wani explores Nazir's personal journey, in the backdrop of the changing political situation in Kashmir, through his childhood, his experiences in the Ikhwan and the Indian Army, leading to his final sacrifice for the country. 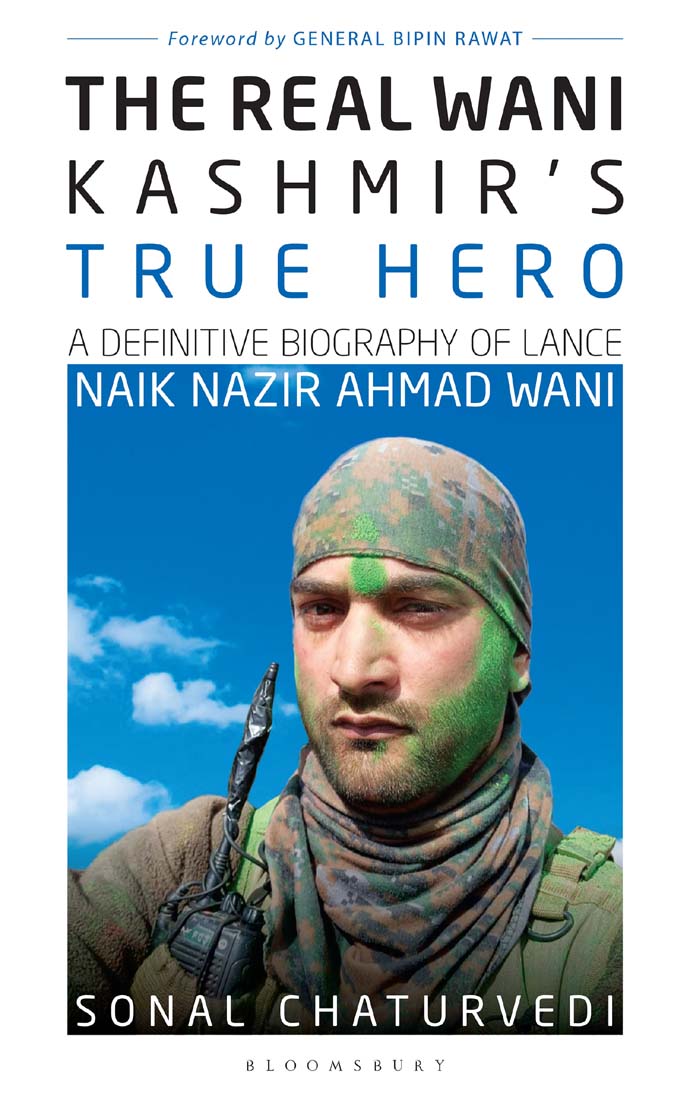 Excerpted with permission from Bloomsbury India.

Mahajabeena woke up a little late on the morning of 25 November 2018. She was still feeling slightly unwell due to the fever. She looked at the watch and immediately got out of bed. ‘I have a lot to do,’ she thought. Today was Athar’s senior secondary chemistry exam. He was staying with a friend for the night to prepare. Mahajabeena picked up the phone to wish him good luck but instead, the phone rang with Ajaz’s call. It seemed a little weird to her that Ajaz was calling this early.

Ajaz gathered himself and told her, ‘Mahajabeena, do not panic after what I am going to tell you. Nazir has been admitted to the army hospital.’ Mahajabeena was shocked and asked what had happened. ‘He got a little hurt in the operation last night,’ Ajaz tried to explain.

But this can’t be. She had had a conversation with Nazir before going to bed. He had clearly told her that the operation was cancelled. The previous night’s conversation played itself over in her mind.

‘But he wasn’t supposed to go. He called me and told me that the operation was cancelled!’

Mahajabeena tried to confront Ajaz, ‘Maybe you have heard about some other Nazir, bhaijaan. Did you check again? Maybe someone else was injured. I shall call Nazir right now.’ Mahajabeena was still in a state of shock. She was about to hang up the phone when Ajaz said, ‘Please calm down. I am sure that it is our Nazir. He went on an operation last night.’ He paused for a minute and said, ‘Sister, the Jeep must be reaching soon to pick you up. You get ready.’

Mahajabeena was now worried about Nazir, ‘But bhaijaan, please tell me, how is he?’ she asked. Ajaz avoided answering the question and only insisted that she get ready to go to the hospital. Ajaz’s behaviour planted a seed of doubt in her heart, and she knew something wasn’t right. Mahajabeena picked up her mobile and dialled Athar’s number straight away.

‘Hello Ammi, I just finished revising for the paper. It’s good that you called. I need your wishes before the exam starts,’ Athar said as he picked up her call.

Mahajabeena knew that Athar’s exam was going to start in a few hours but she had to inform him about his Abbu’s health, ‘Athar, come home immediately. Abbu was injured last night. He has been admitted to the base hospital. Please come home, we have to take the defence card to the hospital.’

Athar was shocked, ‘Ammi, how? When? Is he alright?’

She said she wasn’t sure and asked him to get home as soon as possible. Athar agreed. But Mahajabeena’s heart was sinking. She had a strong feeling that something bad had happened. She immediately gave a call to Mushtaq’s wife.

‘Sister, you tell me what happened to Nazir. Mushtaq must have told you. I feel like they are hiding something from me,’ Mahajabeena asked her.

‘I want you to sit down for a moment Mahajabeena.’

Mahajabeena was getting worried and impatient with every passing second, ‘Please tell me the actual thing sister, apko khuda ka vasta (swear to god).’

There was a pause. And then she broke the news, ‘Mahajabeena, Nazir bhai shaheed ho gae (Nazir has become a martyr).’ In that moment, Mahajabeena’s world collapsed. She was inconsolable. Mahajabeena felt numb, she didn’t know what the person on the other end was saying.

Her mother saw her and immediately understood the situation. She held Mahajabeena and made her sit down. ‘I wish I hadn’t switched off my phone. This goodbye is not right. If only I could talk to him one last time,’ Mahajabeena was crying in her mother’s lap like a baby, her soul felt like it was being ripped apart.

‘How will Athar and Shahid manage, beta, if you break down like this?’ her mother tried to console her. She was right; Mahajabeena had to gather herself for her kids. It was now time to inform Athar and Shahid before they get to know from anyone else. She wiped her tears, took a bag and put a few necessary belongings in it. The Jeep would be arriving at any moment now.

‘Athar is here,’ her father came into the room. She went outside and hugged him. He didn’t know why his mother, who was such a strong woman, was breaking down like this.

‘Don’t worry Ammi, Abbu will be fine. I have brought the card; let us leave for the hospital.’ He tried to comfort her. Mahajabeena looked at him with teary eyes and hugged him again.

‘What happened, Ammi? Is everything alright?’

Athar was beginning to get worried now. Mahajabeena gathered all her courage and said, ‘Athar, Abbu has passed away.’

It was something that Athar couldn’t process immediately. He had been waiting for Abbu to come home on leave. They had planned to go on a vacation after Athar’s exam. Athar had planned to tell him how he was preparing for engineering and hoping to get in a reputed college after passing his senior secondary.

Tears started rolling down his cheeks even though he was trying to put up a brave face in front of his mother.

Mahajabeena held his hand and said, ‘Athar, you have an exam today, you leave with your friend for the centre. Jo hona tha wo ho gaya (Whatever had to happen has happened), you do not put your future at stake.’

‘But Ammi, I want to be there,’ Athar pleaded.

Mahajabeena wiped his tears and explained, ‘Athar, if you don’t give this exam, it will be almost impossible to fulfil your Abbu’s dream of making you an engineer. You have to look out for this now.’

Athar nodded in agreement and said, ‘But Shahid? Does he know about Abbu?’

‘Not yet,’ said Mahajabeena, ‘and do not tell him. He has to travel a long way from Kota. I do not want him to do something that we all will regret later. Let him come home.’

In a few moments, an army Jeep stopped at their gate. Mahajabeena knew what it was about. The army men sat in the room and told her the news. She listened.

‘Do you wish us to inform anyone?’ they asked politely.

‘I will do that myself,’ said Mahajabeena, ‘and I request you to make sure that my younger son Shahid does not get to know till the time he is able to reach Srinagar. The last rites will be performed only when he arrives. It is his right to see his father for one last time.’

The men nodded in agreement, ‘We will ensure that. We have booked a ticket for him to come to Srinagar. An army vehicle will pick him up from there.’

Mahajabeena called Shahid then; he was in his class at that time.

‘Salaam Ammi, I am in a lecture right now, shall I call you later?’

‘No Shahid, this can’t wait. Can you step outside for a minute? I have to tell you something,’ Mahajabeena tried to keep her voice as calm and composed as possible.

‘Yes Ammi, now tell me what’s so urgent?’ Shahid was standing outside his class.

‘Beta, Abbu has been injured in an operation,’ Mahajabeena informed him.

‘What?? Is he alright?’ Shahid got worried.

Mahajabeena held back her tears and said, ‘Yes beta, he is alright. But he is asking about you and wants to see you. So I want you to pack your bags now. Army men will take you to Delhi and you have a flight to Srinagar from there. I will meet you in Srinagar.’

‘I am leaving right now Ammi; tell Abbu that his favourite son is coming, he need not worry.’ Shahid rushed out of the school. Mahajabeena disconnected the phone and started crying. It was necessary for her not to show any signs of pain over the call with Shahid, or else he would sense that something was not right.

‘Shall we leave?’ they asked Mahajabeena. They were supposed to take her to the hospital. Mahajabeena nodded.

As she reached the hospital, she was unable to lift her feet up the stairs. She had feared this day ever since she fell in love with Nazir. And in her subconscious mind, she had tried to prepare herself for the situation. But now, it seemed impossible to come to terms with the fact that when she would see him, he wouldn’t say anything to her. She went into the room and saw him. He was lying there with a peaceful look on his face, disrupted only by a bullet mark on his forehead.

She could not move; there were people giving their condolences which she could not hear. The only thing that echoed in her ears were his last words, ‘I will see you in two days, I am coming home on leave.’ And he fulfilled his promise. He came home for eternity.

#Kashmir, #Indianarmy, #Sonalchaturvedi, #Therealwanikashmirstruehero
The views and opinions expressed in this article are those of the authors and do not necessarily reflect the official policy or position of DailyO.in or the India Today Group. The writers are solely responsible for any claims arising out of the contents of this article.

The writer is an an author and dentist based in Jaipur.