Why slum rehabilitation should be part of Aatmanirbhar Bharat

The pandemic has been an eyeopener for the policymakers that business as usual in the slum rehabilitation and urban planning is not the way forward.

It was on June 3 when Salma* took her 61-year-old mother to the hospital after she complained of fever, cough and difficulty in breathing. After conducting tests, the hospital confirmed that her mother was Covid-positive and recommended admission. The rest of the family was advised home-quarantine. There was a big challenge here. Salma lives in Bhaiya Ram Camp, one of the many slum clusters of Delhi in a tiny eight feet by ten feet dwelling. In order to avoid contact with other family members, she made a makeshift room using sticks and sheets on her terrace, braving the hot June sun.

“For three whole days, I controlled the urge to use the toilet. Finally, I gave in and decided to use the common toilet,” Salma said during an interaction. Salma and her family rely on the shared Community Toilet Complex in their slum, where she was allocated a separate cubicle by the community members. Salma is one of the many families who still do not have a toilet in their homes. Every single day, Salma has had to encounter suspicious looks and discrimination as she walked to the community toilet complex. It was not limited to her. The other members of the family and even those in the neighbourhood were subjected to discrimination. Ramesh*, who lives alone in his small dwelling at Janta Jeevan Rajiv Camp slum in Okhla, had a similar experience. People of his slum did not allow him to use the community toilet fearing the spread of the virus. His horrors included waking up before dawn to defecate in the open. Finally, fed up with the humiliation, Ramesh called for an ambulance to take him to a quarantine centre.

Shastri Market slum cluster near Moti Bagh was one of the first slums to be marked as a containment zone in Delhi. Ashok* and his family live there. Experiences of Ashok’s family were eerily similar to that of Salma and Ramesh. They further elaborated on the lack of awareness in their neighbourhood and pointed out that nearly no one wears a mask.

At least 11 slum clusters or Jhuggi Jhopri (JJ) Colonies have been declared as containment zones by the Delhi government till date. The picture becomes even more alarming if we add other high-density settlements like urban villages and unauthorised colonies, where social distancing and home-quarantine measures are challenging. Delhi crossed the tally of one lakh Covid-19 positive cases, making it the city with the maximum number of cases in the country. Although the government, through its effective measures has been able to bring down the daily number of cases, it must not lose its grip over the situation. 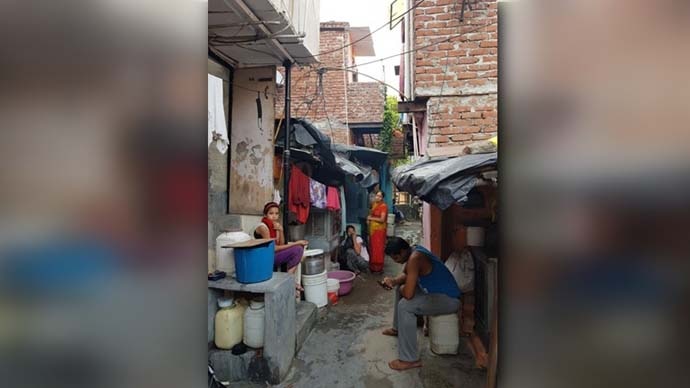 Life goes on as usual with no masks or precautions amidst the pandemic in the narrow lanes of Shastri Market. (Photo: Authors)

Mumbai’s Dharavi model is a good case study to learn from. It is being hailed by experts for the 4-Ts plan — tracing, tracking, testing and treating method — that has paid rich dividends in curbing the spread of the virus in such a high-density settlement. One of the significant measures adopted by the Maharashtra government in Dharavi was to identify users of community toilets and screen each one of them.

The situation also throws light on the bigger picture of providing affordable housing to the poor in the city. To address future pandemics and public health crisis, we must start looking at affordable housing and slum rehabilitation through the lens of disaster preparedness. Major urban planning breakthroughs across the globe have come in response to addressing public health concerns. Even the first master plan for Delhi that was made in 1962 drew heavily from the ‘Interim General Plan for Greater Delhi’, which was jointly prepared by the then Town Planning Organisation (TPO) and Ministry of Health in 1956, highlighting the interdependency between urban planning and public health. In the 1950s and 1960s, the Ministry of Health and Urban Development was a single entity.

In the wake of the pandemic, the government has been introducing various stimulus packages and sector-oriented economic revival measures for manufacturing, agriculture, services and real estate sectors. In addition to this, we strongly believe that the government must also prioritise the rehabilitation of slum clusters as part of their ‘Aatmanirbhar Bharat’ initiative to provide migrants and slum dwellers with a life of dignity. The construction of slum rehabilitation housing will address the twin issues of providing safe, and habitable space for the poor, as well as creating large scale employment. However, it must be ensured that the rehabilitation process is participatory and inclusive, maintains the social fabric, identity and livelihoods of the residents.

In addition to this, governments and municipalities must endeavour to create habitable dwellings by providing proper plumbing and toilets at homes with the focus on integrated development of slums. The Affordable Rental Housing Complex (ARHC) scheme launched by the Centre is also a step in the right direction in providing liveable houses to the poor in the city. Delhi must lead the way by converting existing vacant housing units constructed under JNNURM and Rajiv Ratan Awas Yojana for this purpose. There must be an endeavour to create more such housing units at strategic locations in the city.

The pandemic has been an eyeopener for policymakers that business as usual in the slum rehabilitation and urban planning is not the way forward. It has given policymakers an opportunity to undo some of the historic injustices and create a more equitable and just future for our cities.

(*Names have been changed to protect the privacy of individuals)

Also read: Why Indian cities can never be smart

Post your comment
#Covid-19, #Urban Planning, #Aatmanirbhar bharat, #Slumrehabilitation
The views and opinions expressed in this article are those of the authors and do not necessarily reflect the official policy or position of DailyO.in or the India Today Group. The writers are solely responsible for any claims arising out of the contents of this article.

The authors are urban development practitioners based in Delhi and work on the issues of housing and informality.