Karuna represents one of the nine rasas - moods or sentiments - but in this age of corona it is dance karo-na.

In Indian classical dances, karuna or compassion represents one of the nine rasas - moods or sentiments - but in this age of corona it is dance karo-na. No group activity is allowed since section 144 has been promulgated. This is where art of soloists, which was tailor-made perhaps for such lockdown times, takes centre stage.

So, I try to reconstruct the lives of three soloist legendary dancers, or four, who are the only ones on the Wall of Fame, at the entrance to the famed Kalakshetra, Chennai. They represent different classical forms.

The first one is the founder of course, Rukmini Devi Arundale, herself as one who helped a marginalised form like Bharatanatyam become mainstream. Her students are a legion, and include many famous names. One of them came all the way from Lahore in 1945 - her first male student, my father sardar Mohan Khokar. He never went back home for there was no home to return to. Overnight in 1947, the Partition of India happened. No karuna there either. South danced on, impervious to the Partition far away and its aftermath.

Second important guru on this wall, in terms of seniority, is Kelucharan Mohapatra. Born to Pattachitra painters of Raghurajpur, he painted the whole world with his brand of Odissi. His students are again a legion, and reside in almost all major cities of India. He was a tough guru and a beautiful dancer; the fact that his art reached far and wide is amazing.

The third is Madras Kadirvelu Saroja, the last of Chidambaram bani now. Her guru Muthukumaran Pillai of Kattumunarkoil was the first teacher at Kalakshetra, when it started in 1935.

Last in this pantheon on wall and the youngest at 82 is Guru Birju Maharaj. What Kelubabu did for Odissi, Rukmini Devi for Bharatanatyam, and Birju Maharaj did for Kathak. 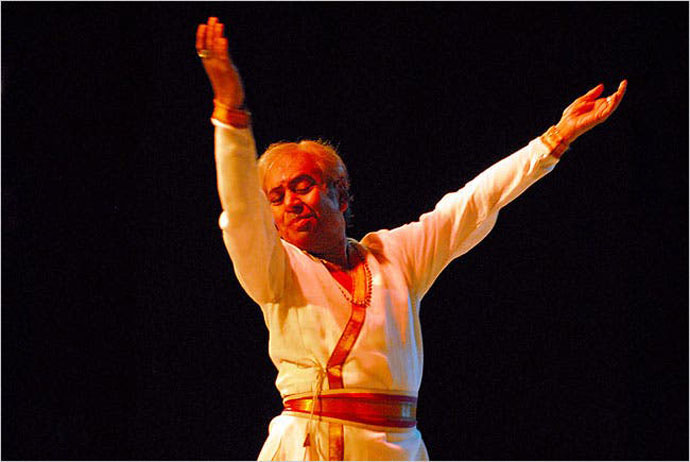 He won many awards for it, including several in Bollywood. His students are spread all over the globe. He is a complete artiste with command over music, choreography and stage.

All three are short - under 5 feet 5 inches - but stand tall in the world of art. They had no adambar (falsification), no formal education (all failed Class 5 and said so proudly). All of them were one among many children to their parents. But what a mark they have left on the world map of Indian art.

Strangely, they are all gurus full of karuna. Simple, down to earth and great. Maybe that's why they are great.

Rukmini Devi once chided me once when I wrote to her: "Aunty I am born on same rare day as you, that is, February 29. So, will I be great like you?"

Normally, such a letter warrants no reply but she being she replied: "Greatness comes from work, not birth."

Talking of birthdays, April 7 is shared as the birth date between Sarojamma, who enters her 90th this year, and Kelubabu would've completed his 95th life cycle on earth, had he been alive.

Both performed together last in Bangalore thanks to dynamic organiser-dancer Pratibha Prahlad in whose mega festival many greats performed, including Sonal Mansingh, and where Ram Gopal was in attendance. This photo is only memory of that show!

Speaking of Sonal Mansingh, another April born and this 30th, she passes her 75th, though she looks 50. She is the only dancer MP.

Rukmini Devi too was nominated but not for dance alone but her contribution to animal rights and vegetarianism.

When on March 13 during Zero Hour, Sonal Mansingh took up the case and cause of the abuse of Indian mythology and misrepresentation abroad, she was taking up an important issue. In the three minutes given to her, she spoke on the Vishnu-Shiva story, told through the prism of gay love by a dance company in Canada. Sonal Mansingh got a Rajya Sabha seat for her contribution to the field of dance. (Photo: Reuters)

Trust Sonal to show spunk when all others are timid or hide under excuses. Not one diva or dancer wished to speak on the topic. Sonal is an army by herself and while others say karo-na, she says daro-na.

More power to such gurus and greats of India.

Also read: Panchayat Review: Welcome to sweet and sour but our Bharat

#Sonal Mansingh, #Bharatnatyam, #Kathak, #Classicaldancers
The views and opinions expressed in this article are those of the authors and do not necessarily reflect the official policy or position of DailyO.in or the India Today Group. The writers are solely responsible for any claims arising out of the contents of this article.