Students in India are under attack from the BJP government. It is time for them to join forces

From scholarship cuts to lack of jobs, students must bury differences and come together to make the government accountable on every issue.

Student movements and individual students spearheading such movements have repeatedly come under attack over the past decade or so. These attacks, however, have risen over the last four years. 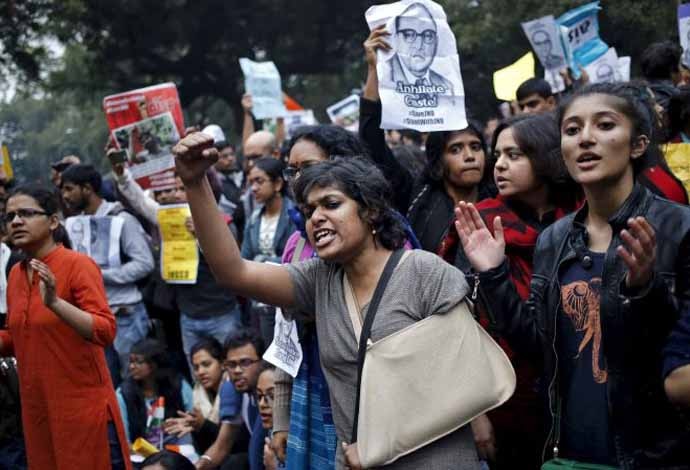 Time to fight back: Students across India have increasingly come under attack in the last four years. (Source: Reuters)

A recent example of such a motivated crackdown is the Ambedkar Periyar Study Circle in IIT-Madras which was shut down after an alleged complaint by the the Akhil Bharatiya Vidyarthi Parishad (ABVP). The ban was imposed after an order from the Union Ministry of Human Resource Development.

In October 2015, Delhi students joined the call of the Jawaharlal Nehru University (JNU) Students Union to occupy the central office of the University Grants Commission (UGC). The protest continued for over more than two months against the UGC’s decision to discontinue non-NET fellowships.

Then, 2016 was rocked by major student protests after the suicide of the Dalit research scholar at Hyderabad Central University, Rohith Vemula.

Meanwhile, ever since the BJP government came to power, the JNU student community has been under constant attacks. This has now gone to the extent of the Delhi Police levelling sedition charges against some JNU students. The attacks on JNU students rose in a big way in February of 2016 when the ruling party claimed JNU students were raising anti-national slogans on the campus.

In September 2017, the women students of Banaras Hindu University (BHU) rose in protest in demonstrations against sexual harassment and gender-based discrimination in the university. Tragically, the police used physical violence in a bid to curb the protest.

In 2017 itself, violence was also reported when students of Punjab University started a protest against the proposed fee hike. The BHU protest by women students was met not with understanding but hard violence instead. (Source: Twitter)

Amid all this, the government has been unrelenting in its attacks on JNU students. The library funds for the university have apparently been cut down from Rs 8 crore to Rs 1.7 crore. Also, students have been denied the right to hold meetings and are reportedly being fined liberally.

The students are also suffering because of a deep lack of employment opportunities in the country.

The country’s unemployment rate stands at 7.8 per cent in urban areas, as compared to 5.3 per cent in rural areas. The labour force participation rate — the proportion of the population working or seeking jobs — has meanwhile declined to 36.9 per cent in 2017-18 from 39.5 per cent in 2011-12, as reported by the National Sample Survey Office (NSSO) data approved in December 2018.

In such a scenario, it is imperative for the student community to come together and put up a united fight. They must unite to demand stipends and scholarships that are facing a systematic reduction.

A network of students must prepare a memorandum to unite and to fight it out in order to ensure a brighter future for themselves. The students must put aside their differences and unite now for the larger good of their community.

Also read: Target JNU: How the sedition case is being used ahead of 2019's Lok Sabha polls

#Banaras Hindu University, #Sedition, #JNU, #Student protests
The views and opinions expressed in this article are those of the authors and do not necessarily reflect the official policy or position of DailyO.in or the India Today Group. The writers are solely responsible for any claims arising out of the contents of this article.