Resident Indians, including former INA soldiers and their relatives based in the country, have contributed immensely to keep Netaji's memory alive.

October 21, the Foundation Day of the first free government of India, is near. It was my privilege to be a member of a delegation under the auspices of Netaji Subhas Kranti Manch, to visit Singapore to commemorate the formation of the provisional government of Azad Hind.

We landed in Singapore in the morning on October 20, 2012. After checking in at the hotel, we marched off to the National Archives of Singapore to see documents related to the Indian National Army. To our surprise, we found three volumes arranged in a chronological order for us to study. There were some rare documents on which more research should be done. It was decided by the delegates that a research team may visit later, specifically, to study the documents. In the afternoon, the delegates were invited to the Global Indian International School, for their annual day celebrations.

The performance of the students was brilliant and we noticed that the school - though situated in Singapore - ensured knowledge of Indian heritage and tradition was inculcated in the students. In the evening, an interactive session with Indian residents was arranged at Bayshore Condominium by Sayantan Dasgupta of Mission Netaji. The delegates had an opportunity to interact and discuss issues related to the freedom struggle launched by the Azad Hind Fauj (INA).

The next day on October 21, 2012, the historic day, we visited the Cathay Hall in Singapore, accompanied by Lt Girish V Kothari, of the Indian National Army, where almost seven decades ago (72 years ago) on October 21, 1943, Netaji Subhas Chandra Bose formed the provisional government of Azad Hind, the government of free India in exile to launch the final struggle for Indian independence. In the presence of over one thousand delegates and Indians living in east and south-east Asia, Netaji as the head of the government, declared: 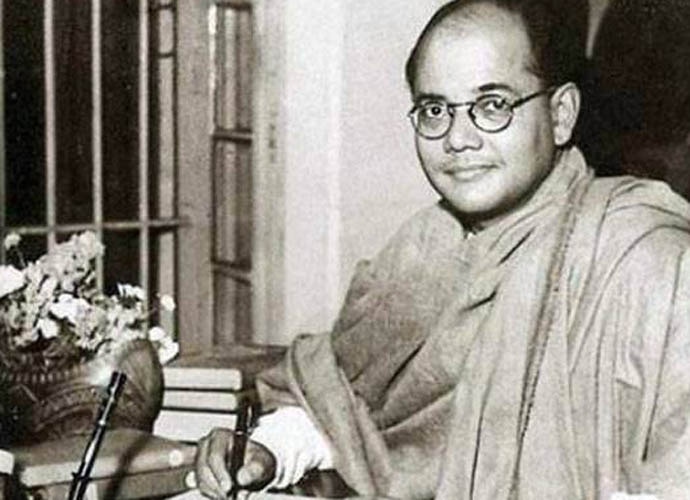 The provisional government is entitled to, and herby claims, the allegiance of every Indian. It guarantees religious liberty as well as equal rights and equal opportunities to all its citizens. It declares its firm resolve to pursue the happiness and prosperity of the whole nation equally and transcending all the differences cunningly fostered by an alien government in the past.

In the name of God, in the name of bygone generations, who have welded the Indian people into one nation, and in the name of the dead heroes who have bequeathed to us a tradition of heroism and self-sacrifice - we call upon them to launch the final struggle against the British and all their allies in India and to prosecute that struggle with valour, perseverance and full faith in final victory - until the enemy is expelled from Indian soil and the Indian people are once again a free nation."

(Proclamation of the provisional government of free India, October 21, 1943)

Our delegation, comprising of 22 members from north, south, east and west India, assembled in Singapore to commemorate the final battle for our Independence, which was launched from Singapore by the provisional government of free India and the Indian National Army under its supreme commander, Subhas Chandra Bose. The delegation went to Singapore to salute and pay homage to the people who served the INA for their country in Malaysia, Thailand and Myanmar. Here our brothers and sisters dreamt of a free India and from here they marched on to India with the slogan "Chalo Delhi" on their lips. It was also in this region that the local

Indian communities gave up everything in terms of their people, money and resources to the provisional government to conduct the Indian war of Independence.

The Indian National Army, the army for the liberation of India, or INA, as it is popularly known, fought on the Indo-Burma front, and finally entered India in early 1944. In March 1944, the INA was able to enter India and fight the enemy on Indian soil. The thrust was towards the north- eastern gateway of India towards Imphal and Kohima. The high point came when the INA raised the Indian Tricolour on Indian soil at Moirang in Manipur in the north-east of India on April 14, 1944, when their march to Delhi was halted. The superior military might of the British, the joint Anglo-American forces and the torrential monsoons turned the tide against the Indian National Army and they had to beat a retreat.

In the military defeat of the Indian National Army lay the seed of their ultimate victory over British imperialism. As Netaji had predicted - once the news of the heroic exploits of the INA men and women with their ultimate sacrifice for freedom would reach India, it would galvanise the people to rise against the British Raj. The miscalculation on the part of the British authorities helped it in no small measure.

With Japan's surrender on August 14, 1945, came the end of the war and the British began to repatriate the INA soldiers and officers to India. The British refused to give them the status of "prisoners of war" and labelled them as traitors and deserters. Thousands of returning INA soldiers began to tell their stories about their leader Netaji Subhas Chandra Bose. While the British authorities considered how and when to put these men on trial, popular adoration, respect and support spread like wild fire and the demand for the release of the INA men and women increased rapidly.

Bose was the man of the hour and his dream and strategy unfolded dramatically even in his absence. When the three officers of the INA - captain Shah Nawaz Khan, captain PK Sahgal and lieutenant GS Dhillon were put on trial at the Red Fort - the British did not take long to realise that their game was over. The officers were released and they were hailed by their countrymen as heroes. 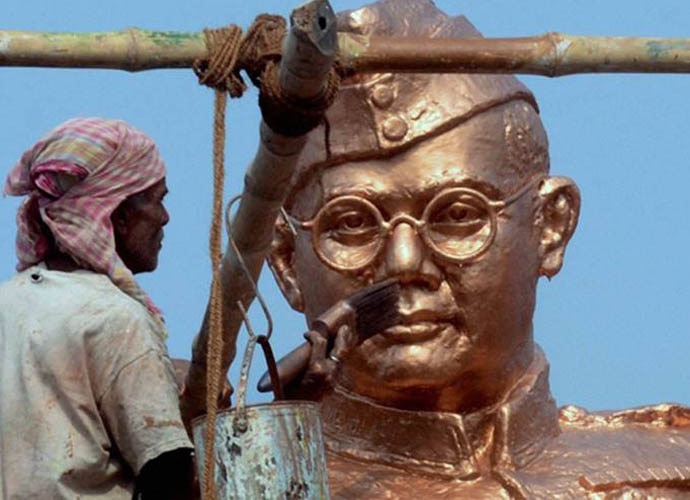 India finally attained independence on August 15, 1947, and there is no doubt about the role that the Indian National Army and its leader Netaji Subhas Chandra Bose played in this ultimate triumph of freedom over bondage. Netaji's dream had been finally realised but it was only a pale reflection of his dream - his dream was of a united, vibrant and prosperous India where there would be no discrimination for caste, creed or religion and everyone would enjoy equality of opportunities. His dream is yet to be realised.

After Cathay Hall, the delegation visited the INA War Memorial at Esplanade Park, Singapore, near Padang. Floral tributes were paid. On July 8, 1945, Netaji Subhas Chandra Bose laid the foundation stone of the INA War Memorial to commemorate the "Unknown Warrior" of the INA. The words inscribed on the War Memorial were the motto of the INA: Unity (Ittefaq), Faith (Etmad) and Sacrifice (Kurbani).

Paying homage to the martyrs of the INA, Netaji had said: "The future generation of Indians who will be born not as slaves, but as free men, because of your colossal sacrifice, will bless your names and proudly proclaim to the world that you, their forebearers, fought and suffered reverses in the battle of Manipur, Assam and Burma. But, through temporary failure they paved the way to ultimate success and glory."

After its foundation by Netaji, the Japanese built the memorial within a month. When the British returned to Singapore later in 1945, Lord Louis Mountbatten, head of Southeast Asia Command of the British, ordered the INA Memorial to be destroyed. Mountbatten's intention was to remove all traces of rebellion against British imperial authority.

In 1995, the place where the INA Memorial once stood was marked by the National Heritage Board as a historical site and subsequently with financial donations from the Indian community in Singapore a new monument commemorating the original was built by the Singapore government. The memorial was rebuilt by the Singapore government to honour the INA soldiers who gave up their lives to liberate India from the clutches of British imperialism.

On October 22, 2012, the delegates were invited by the Global Indian International School, for a seminar on our freedom struggle. The students spoke on revolutionaries and freedom fighters such as Subhas Chandra Bose, Shaheed Bhagat Singh, Mahatma Gandhi and others. Prof Ved Prakash Saini, Dr Dwarka Nath Bose and I spoke at the seminar. There was an interactive session with the students. It was observed by the delegates that the students were highly informed about the freedom movement.

The delegates were invited to a reception hosted by His Excellency, Dr TCA Raghavan, the then Indian high commissioner to Singapore. The reception was attended by dignitaries such as ambassador K Kesavapani, INA veteran Lt. Girish Kothari, son of Janaki Thevar, INA, Nilanjana Sengupta, historian and many other distinguished persons living in Singapore. During the discussions, some of the delegates requested His Excellency, Dr Raghavan, to take up the issue of installing a statue of Netaji Subhas Chandra Bose in Singapore. Dr Raghavan mentioned that whatever has been done so far in terms of constructing a memorial for the Azad Hind Fauj (INA), was due to the initiative taken by resident Indians including former INA soldiers, and their relatives based in Singapore. It was not necessary for the government of India, nor the Indian High Commission to take up the issue with the government of Singapore. He felt that the Indian community in Singapore would take up the issue of installing Netaji Subhas Chandra Bose's statue. The High Commission would be glad to extend all support and assistance.

Also read: Sangeet Som, Taj Mahal is everything India should be proud of

#INA, #Singapore, #Bose memorial, #Subhas Chandra Bose
The views and opinions expressed in this article are those of the authors and do not necessarily reflect the official policy or position of DailyO.in or the India Today Group. The writers are solely responsible for any claims arising out of the contents of this article.

The writer is the grand-nephew of Subhas Chandra Bose. He is also the vice-president for BJP in West Bengal.