Supreme Court allows Mumbai dance bars to open: Why it will be a catch-22 situation for the state government

The state government will now have to bear the brunt of moral policing of the urban middle class.

As the Supreme Court announced its verdict on dance bars in Mumbai, the doors of the iconic “Chham-Chham” (as dance bars are known in typical Mumbai lingo) are set to reopen.

On Thursday, the apex court set aside restrictions on the functioning of dance bars in Maharashtra, imposed after the ban itself came in August 2005.

The 13-year-old ban was not just about 'moral policing' as often quoted.

There are interesting socio-political and cultural perspectives to it.

Flashback 2003: Sharad Pawar’s Nationalist Congress Party (NCP) was barely four years old. After a split from the Congress, citing Sonia Gandhi’s foreign origins, the party was still struggling to find its ground in state politics. It was not easy for the NCP as the Congress was still strong in rural areas. For the NCP, targetting the 'Chham-Chham' bars was a vote bank decision. (Photo: Reuters)

The party was looking to find new political pastures in urban areas. Apart from bringing in younger, urban faces as party leaders, it also needed something that would help boost the party’s image in urban areas. This was the time the newly appointed home minister, (the late) RR Patil came up with the proposal to ban dance bars in Mumbai.

Patil, who was then little-known in the political circles, suddenly shot to fame with the dance bar ban.

In the beginning, the government cited reasons like the younger generation and families getting ruined owing to the growing dance bar “culture”.

The reason, although doubted at the political and administrative levels, struck an instant chord with the urban middle class, especially women.

For the party, it was a decision that would help it tap the urban middle class with a new narrative of cultural activism, without any religious leaning.

It was a win-win situation.

NCP top brass sensed this opportunity to reach out to urban voters and backed the decision, even as controversy raged. The state was accused of moral policing, but the party wasn’t bothered.

But implementing the ban wasn’t going to be an easy task. The dance bars had become synonymous with Mumbai’s nightlife. In popular cultural discourse, these had become an inseparable part of the Bollywood films of the 1990s and early 2000s.

The cops too relied heavily on these dance bars as a solid source of information. Dance bars and bar girls were very much an important part of the network of ‘khabris’ (informers).

So, the decision of a ban was not going to be easy for the cops as well.

But there was another side to it.

The real estate business in Maharashtra had recently started to flourish, especially on the outskirts of the metropolis.

Areas like Mira-Bhayander (on the Western Highway towards Surat), Panvel (towards Pune and Goa) and Mulund–Thane (towards Nasik) had become the hub of dance bars.

Youngsters and patrons from rural Maharashtra used to frequent these bars and shower lakhs of rupees on the dancers in one night. Borrowing a page straight out of Moulin Rouge, the myths surrounding the dance bars too caught the fancies of the youth.

Bundles of crisp ten-rupee notes were showered on the girls.

Abdul Karim Telgi, kingpin of the multi-crore fake stamp paper scam, was said to have showered 93 lakh rupees on one girl in one night.

Tarannum, a bar girl from a famous upscale nocturnal joint, shot to fame for becoming a millionaire. 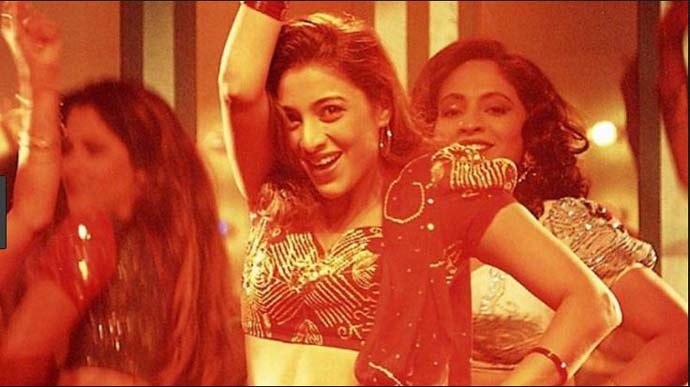 Dance bars, as mentioned earlier, had become an integral and inseparable part of the city’s nightlife, logging more footfalls than anything else that attracted tourists to the city. The money involved was huge. Even in a small dance bar, lakhs were blown away in away night. The girls got half the money while the hotel kept half, and all these transactions were in cash.

But the government zeroed in on one point and that was the exploitation of girls.

There was no denying that most of the bars had become ‘pick-up points’ leading to large-scale prostitution — especially bars on the outskirts like Mira-Bhayander, Panvel and Mulund Check Naka.

But the political gains were bigger than the other stakes involved.

Subsequently, dance bars were shut down. 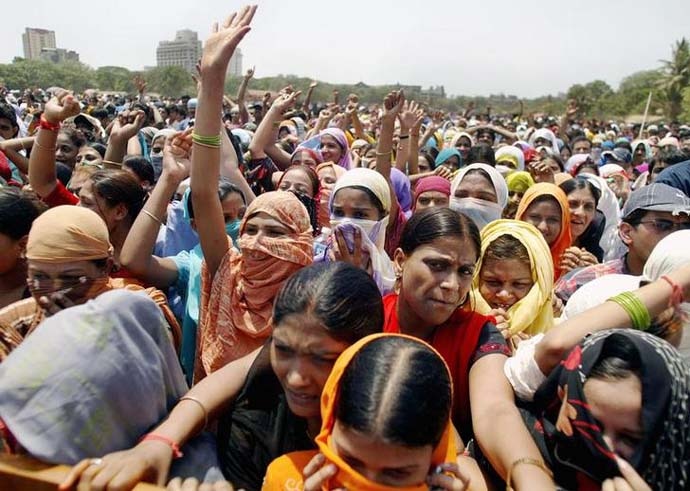 About 70,000 bar girls were rendered jobless. (Reuters photo of a protest march of bar girls in Mumbai)

With nearly 700 official and illegal bars in the state, nearly 70,000 bar girls were rendered jobless. About 40,000 other staff too were left in the lurch.

In April 2006, the Bombay High Court first struck down the decision and it was upheld by the Supreme Court in July 2013.

But the bar story wasn’t over as yet. The Maharashtra government banned dance bars again in 2014 by an Ordinance, but the Apex Court termed it ‘unconstitutional’ in October 2015.

The state government further modified the law and brought in strict regulations, like CCTV cameras and a gated area for bar dancers.

Though the government had changed this time, and the Supreme Court continued to come down heavily on the ban, the decision to implement the SC order was not going to be easy at all.

It was a Catch-22 situation for the government and continues to be.

On the one hand, the government has to tackle the constitutional rights issues, pointed out by the Supreme Court, but on the other, it also faces the fear of being at the receiving end for allowing dance bars to function — an act that will be scrutinised carefully now on 'moral' grounds.

Post your comment
#Chandni bar, #Maharashtra, #Supreme Court, #Dance Bars
The views and opinions expressed in this article are those of the authors and do not necessarily reflect the official policy or position of DailyO.in or the India Today Group. The writers are solely responsible for any claims arising out of the contents of this article.