Supreme Court to get sanitary napkin vending machines, our offices need it too

Apart from the obvious benefits to women, the machines will also help wipe off the silly secrecy around menstruation.

The Supreme Court of India has decided to install sanitary napkin vending machines on its premises. This is the second step from the apex court in its attempt to make workplaces more inclusive for women, after introducing a crèche service two years ago (which, sadly, has not been very successful so far).

While the Supreme Court's step is admirable, it is downright strange that even in 2017, it should appear so trailblazing. It is a proven fact that more women are joining the workforce in both organised and informal sectors in India. It is also a fact that women menstruate. Then why are no arrangements made for the said women going through the said phenomenon?

Since the time they attain puberty, girls learn to carry sanitary napkins in their schoolbags, stowed away, usually wrapped in black plastic. In co-ed schools, getting your period in class was a full-blown crisis, necessitating major strategic planning for the super stressful, super secretive trip to the toilet. Not for nothing do more than 20 per cent of girls in the country drop out of school after hitting puberty. 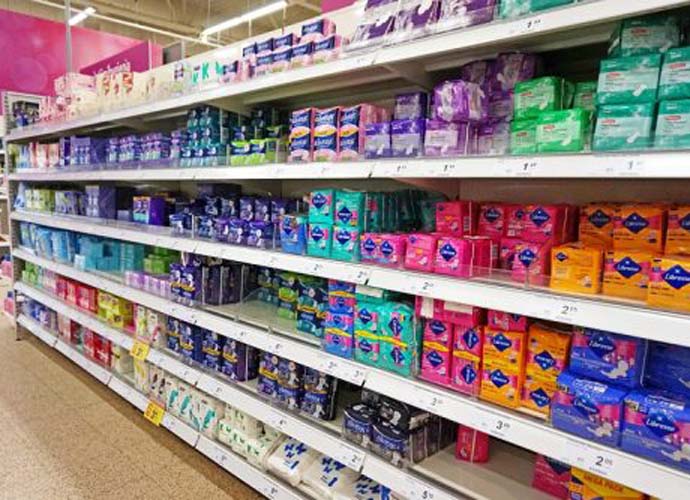 Sanitary napkins are unaffordable and unavailable to many women in India. Photo: Wikimedia

At workplaces, periods continue to remain the embarrassing secret they were for teenage girls. Napkin-borrowing is a delicate operation, carried out with the SOP women have evolved - a softly voiced question, a barely perceptible nod, a surreptitious passing of the package. Male colleagues who figure out what is going on turn supremely awkward, focusing on their work with a renewed, fierce concentration.

Installing napkin vending machines at all workplaces can be that small step which can prove to be a giant leap for womankind. Why should women employees be forced to interrupt work to ask colleagues for napkins, or rush out to the nearest chemist? Why not give them the mental peace of knowing that should crisis strike, a napkin is easily available, theirs for the taking?

While a lot of women would prefer to have the vending machines inside washrooms, some should also be put in common areas, so that napkins can be normalised and we can all grow up about periods. Napkins and tampons should not be something to be embarrassed about. Photo: Reuters

Not just workplaces, sanitary napkins should be made available at all public spaces, such as parks, metro stations and bus stops. While such machines are bound to attract stares, giggles and pointers, hiding away napkins is not the way to deal with them, sensitisation and awareness is.

Of course, all of this is applicable only to the privileged minority for whom pads are available and affordable. The first step has to be to distribute them for free in slums and rural areas, along with conducting awareness programmes. Pads and tampons are ridiculously expensive. They need to be more affordable, and a starting point can be making them tax-free.

In the past year, several states, such as Kerala, Goa, Haryana and Rajasthan have started the initiative of installing napkin vending machines in schools and colleges. While the success of the scheme depends on how well it is implemented, it is a move in the right direction.

A lot needs to be done towards ensuring workplace equality for women. One good step would be allowing them to menstruate without feeling like they have blood on their hands.

Also read: In India, period leave should be every working woman's right

#Menstruation shaming, #Periods, #Sanitary pad vending machines, #Supreme Court
The views and opinions expressed in this article are those of the authors and do not necessarily reflect the official policy or position of DailyO.in or the India Today Group. The writers are solely responsible for any claims arising out of the contents of this article.