DailyOh! The truth about Sushant Singh Rajput’s death, to how RJD dealt with rape accused MLAs

The AIIMS report says that there was no murder. But the report can’t settle the truth.

After all the doubts are cleared, comes the truth. And then some more doubts are cast over the truth arrived at. So the truth may be what truth is, but even doctors at the top medical institute of India do not have a treatment for those committed to believing the lie.

Dr Sudhir Gupta, who headed the seven-member AIIMS team that reevaluated actor Sushant Singh Rajput's post-mortem and viscera reports, has said that the actor died by suicide. If he died by suicide, he wasn't murdered. 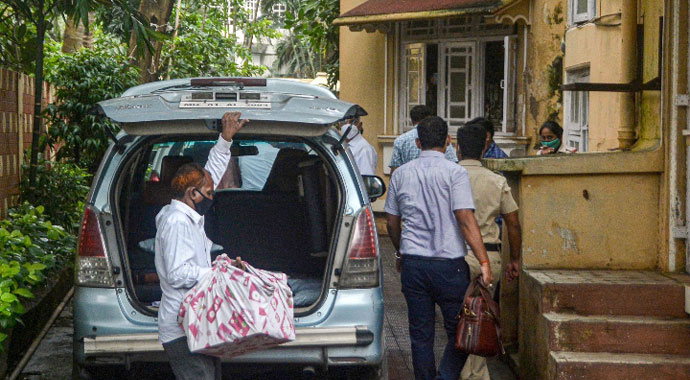 The AIIMS team investigating Sushant Singh Rajput's death has found it to be a case of suicide. (Photo: PTI)

Questions have since been raised over what Dr Gupta said when he started investigating the case. On August 22, Dr Gupta had said that he thought Sushant was murdered. The CBI had asked AIIMS to look into the case only on August 21. So Gupta’s thoughts were just that - thoughts. Evidence, he and the six others on his team went through, has conclusively ruled out the thoughts as a lie.

The AIIMS report has been submitted to CBI and CBI will include the findings of this report in its final report that will look at other evidence as well to bring out the whole truth.

Truth is always contested so much so that many contest the finality of truth. Tom Stoppard said that the contest over truth never stops because the truth is always a compound of two half-truths, and you never reach it because there is always something more to say.

Truth, the Word Of The Day, comes from true, which draws from Old English ‘treowe’. Treowe meant ‘steadfast, loyal, in good faith’. Some say truth is relative like when you sit in a fast-moving vehicle, for you the trees outside may seem to be on the move. So what makes truth truth is that it should be something that can be proven. Like when you are in a fast-moving vehicle you reach from point A to point B. The trees between point A and point B haven’t moved can be checked by going back to them. You may call it a waste of time because you know trees grow but don’t move.

Sushant’s death looked like suicide, but investigators were forced to go back to prove it was a murder. They went back and have so far found it to be a suicide.

US President Donald Trump, meanwhile, went out of the hospital where he is being treated for Covid-19 to wave at his supporters. He showed both his thumbs too to the crowd. A Covid-positive Donald Trump takes a break from the hospital. (Photo: Reuters)

The medical community in the US is fuming over Trump breaking Trump government’s protocol on Covid isolation. His security staff and the man who drove Trump around during his waving spree, have had to hide the fumes of their anger.

Over the last two days, Trump's oxygen level has plummeted. With elections less than a month away, this is as bad as it can get for Trump. The falling oxygen levels led to speculations over whether the 25th Amendment, affecting a power transfer, would be invoked.

Section 3 has often been invoked. But do you know why the 25th Amendment was introduced? In 1841, US President William Harrison died while he was in office. And this started a debate over whether Vice President John Tyler should become acting President, or the President, or officially remain the Vice President. Tyler decided on his own that a judge should administer him the oath of office. Then in 1963, John F Kennedy was assassinated and the debate started again.

In the immediate confusion following the shooting of Kennedy, there were tense questions about who would run the country should he survive but only in a semiconscious or otherwise in a grievously wounded condition.

Section 3 was twice invoked by George W Bush and once by Ronald Reagan for medical procedures. Section 4 has never been invoked. But there is always a first time for it to be a second time.

Back in India, the Finance Ministry has said India could well be past its peak in September because the number of Covid-19 cases has significantly dropped over the past one week. The Ministry said that this does not mean the pandemic is over but does mean the stage to push the frontiers of economic recovery is set.

Congress leader and Karnataka Congress chief DK Shivakumar today suffered an economic setback as Rs 50,00,000 lakh was recovered from 14 premises allegedly linked to him and his brother DK Suresh. The raid was conducted by CBI, which has booked Shivakumar and others on allegations of acquisition of disproportionate assets. Shivakumar is a businessman, apart from being a Congressman, so Rs 50,00,000 do not sound like a big catch. Also, it hasn’t been found from his premises but those allegedly linked to him.

So, it will take some more investigation to prove if DK Shivakumar was a Bad Boy Millionaire. Netflix has nevertheless released three episodes of Bad Boy Billionaires: India. The release if partial because the whole series covers four Boys (men) – Vijay Mallya, Nirav Modi, Ramalinga Raju and Subrata Roy. The part that has been left out — for now — deals with Raju.

RJD chief Lalu Yadav’s boys, Tejashwi and Tej Pratap, have been booked for the murder of former RJD leader Shakti Malik. The allegation against the sons is that they demanded Rs 50,00,000 from Dalit leader Malik in lieu of a party ticket from Raniganj and got him killed since he refused. If you kill someone for refusing to give you money, you don’t get the money. But you sure can get jail. That is political suicide minus the money. Tejashwi and Tej Pratap Yadav have been accused in the murder of former RJD leader Shakti Malik. (Photo: PTI)

The Bihar Police will investigate and find out if it was political suicide or just an attempt to show RJD as an anti-Dalit party in Bihar at a time when BJP has looked anti-Dalit in UP’s Hathras after the alleged gang-rape and murder of a 19-year-old woman.

On its part, RJD has released the first list of candidates and replaced two MLAs accused of rape with their wives in the candidate list.

Raj Ballabh Yadav would be replaced by wife Vibha Devi from Nawada because Raj Ballabh is in jail on charges of a minor’s rape. Kiran Devi will contest from Bhojpur because her husband Arun Yadav went absconding after he was accused in a rape case about a year ago.

From Bihar let us cross over to Bengal, where Governor Jagdeep Dhankhar is complaining that Chief Minister Mamata Banerjee ignored his message to speak urgently. Dhankar sent the message at 10.47 pm. That is pretty late, Mamata might say, but Dhankar has ruled late is fine when it is urgent. What was the urgency? BJP leader Manish Shukla was shot dead in Barrackpore, 20 km from Kolkata, while he was talking to some leaders close to a police station. BJP blamed the TMC government for the ‘targeted political killing’ and this is what Dhankar wanted to discuss.

Mamata Banerjee, meanwhile, has expressed sadness over the death of playback singer Shakti Thakur but said nothing about the discussion with Dhankar.

Politicians got no chill, but the weather got some. With the humidity gone, the weather is getting slightly cooler. You can use the pleasant weather to get into the kitchen and make yourself some breadizza (bread wala pizza).

If you don’t like the kitchen, no matter what the weather, sorry to have hurt your feelings. You can always pass on the recipe to your friend, partner or parent, who loves cooking and get breadizza in return.

Also read: How private are your WhatsApp chats?

#Donald Trump, #Bihar Elections, #Aiims report, #Sushantsinghrajputsuicide
The views and opinions expressed in this article are those of the authors and do not necessarily reflect the official policy or position of DailyO.in or the India Today Group. The writers are solely responsible for any claims arising out of the contents of this article.