A narrative has already been created about the supposed toxicity of Left-liberal journalists and a dangerous precedent has been set.

A morbid and decidedly uncalled-for wish came from Suprateek Chatterjee, a journalist and film critic, on the birthday of Prime Minister Narendra Modi, when he tweeted: “Good to know that Modi is one year closer to retirement/death #IChooseOptimism.” And this "birthday greeting" opened the floodgates for social media outrage, ultimately resulting in Chatterjee's contract being terminated with a reputed media house.

That Narendra Modi is not liked by sections of the media is no secret. Since his ascension to the office of prime minister, Modi has been met with hostility and criticism from a number of journalists, something he has returned in kind – by nearly eliminating the media (print, television and digital) as the mediator between him and his voters. But criticism of BJP’s hackneyed digital revolution, development and nationalist rhetoric is not the same as saying “one year closer to death”. That is where, for the lack of a more apt phrase, “sh*t hit the fan”.

Chatterjee’s tweet (which has since been taken down) was picked up by Amit Malviya, the head of BJP’s IT cell, who has a record of spreading propaganda and misinformation. Malviya, displaying BJP’s trademark disdain for the Left-leaning liberal media, tweeted a screenshot of Chatterjee’s words with the contemptuous caption: “Another journalist…”

Almost as if on cue, screenshots of several of Chatterjee’s older tweets – ones that were similarly worded as the birthday “wish” were found circulating on Twitter. A seven-year-old tweet of his read: “According to WikiLeaks, LeT [Lashkar-e-Taiba] planned to kill Narendra Modi. I’m just putting that out there in the universe. You know, for good luck.”

this is definitely more than acknowleding mortality pic.twitter.com/KzALk1gSEs

And even as faceless trolls seemed to be having a field day lambasting Chatterjee, it was media organisation’s reaction to this incident that has been seen as bizarre and unfair. The Quint, a digital media organisation founded by Raghav Bahl, in Chatterjee’s own words threw him under the bus.

Chatterjee, the former entertainment editor of HuffPost India, currently freelances for several organisations of repute including magazines such as Open and The Caravan. The Quint too, was a part of his portfolio, but no more. When Chatterjee’s tweet was being trolled, the organisations he wrote for, as expected, got dragged into the mud-slinging.

The Quint, quick to distance itself from this controversy, put out a statement on its Twitter account.

The statement read: “The Quint condemns any kind of hate mongering. Suprateek Chatterjee is not an employee of The Quint. He has been a contributing writer. We are shocked by the views put out by him on Twitter and condemn all hate mongering. He will not write for us again and all his posts are being taken down from our website.”

What The Quint did is a classic case of virtue signalling. Not only did it, as a media organisation, publicly condemn the personal opinions of someone who is not their employee, they went ahead and, in a fit of almost comic overkill, informed on social media that Chatterjee’s previous posts — unrelated to the tweets in question — on their website (reviews of movies and television shows) would be taken down.

In fact, this is not even the first time that The Quint has had a knee-jerk reaction to something that had the potential to besmirch its name.

A tweet by Vikas Malhotra, a columnist with The Quint in March 2017, drawing parallels between a photo from Modi's UP election road-show to late US president John F Kennedy's assassination by a sniper, created a controversy. His exact words were: “It is campaign moments like these that create history. Unfortunately this time though, there was no sniper around”.

Malhotra's tweet, unlike that of Chatterjee, was malevolent and could actually be called hate-mongering. And it received the exact same treatment. Soon after the outrage over Malhotra's tweet, both Raghav Bahl's and the website's official Twitter accounts stated that the journalist was not an employee of The Quint, adding that his blog on the website would be discontinued and all his posts would be deleted. Even in the case of Army jawan Lance Naik Roy Mathew, where The Quint had conducted a sting operation on the existing buddy system in the Indian Army without the knowledge of the soldier at Maharashtra's Devlali, and within days of the sting, Mathew committed suicide. The Quint's first reaction then was to remove the story from its website.

Reacting to The Quint's overreaction

While Amit Malviya may have dismissed this condemnation with “Big deal! He will continue to write for others. After all he has now earned the platinum membership of the Left-liberal Modi haters club”, social media users, writers and journalists have been squarely critical of The Quint.

Big deal! He will continue to write for others. After all he has now earned the platinum membership of the Left-liberal Modi haters club.. https://t.co/JBxGfPQ0Le

Rega Jha, the editor of BuzzFeed India, tweeted, “This was unnecessary, and sets a scary precedent. Are we going to get bullied into erasing and silencing anyone irreverent toward leaders,” Devang Pathak, the founder of Was That Funny – a comedy and culture blog – criticised the necessity of deleting his previous byline copies, “Did he plagiarise? Was his work sub-standard? No. You happily got views and money on the basis of it until now. So then why delete?”

This was unnecessary, and sets a scary precedent. Are we going to get bullied into erasing and silencing anyone irreverent toward leaders? https://t.co/w6NelE19PH

When you say you're the 'Signal over the noise' but you're really just the noise. https://t.co/Hidu9fjLVg

"We don't support or condone his views. He isn't an employee"You deleting his work for non-journalistic reasons isn't fair.

Did he plagiarise? Was his work sub-standard? No. You happily got views and money on the basis of it until now. So then why delete?

I will have to read my future freelance contracts better. Incase they ever disagree with what I say, all hardwork will be torched in seconds

Really sad and dissapointing. No reason to do this. Except suck up to ensure that some approval that has been pending for months comes in. https://t.co/pBNqip5C8R

Advocate and columnist Sayak Dasgupta went so far as to ask The Quint to take down his works published on their website:

Hi @TheQuint. In solidarity with @SupraMario, would request you to please take down my written piece and photos you have used in the past. https://t.co/aluFtx4LkB

Word should be fought with words. Sacking someone for abusing PM or wishing bad for PM will set wrong examples. pic.twitter.com/76ljQsgN2F

Chatterjee tweeting about his optimism for Modi’s death/retirement has been compared by several people to the celebratory tweets following Gauri Lankesh’s cold-blooded murder. Right after the news broke about Lankesh’s death, several Twitter accounts, a few of which are also followed by Prime Minister Narendra Modi and other Union ministers as well, celebrated Lankesh’s murder, called her names (like "Naxal" and "bitch"), and rationalised her death by pointing out that she was no different from Burhan Wani – the Kashmiri Hizbul militant who was killed in an encounter in July 2016.

For many, Chatterjee’s tweets, the one on Modi’s birthday and older ones as well, reflected the hypocrisy of the liberal media and those who are Left-leaning. Observing someone’s mortality is not the same as wishing someone’s death. Nor is it the gross celebration of the death of a fearless critic of sectarianism, communalism and religion.

Chatterjee himself explained his stance in a series of tweets. 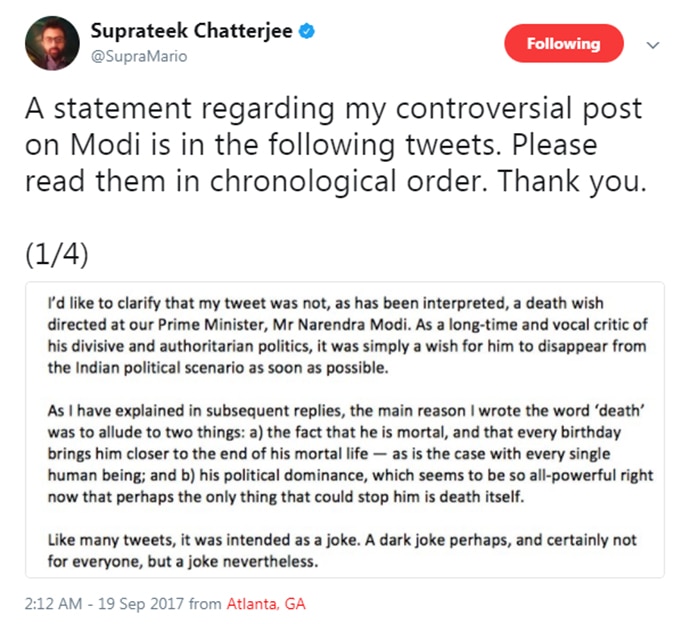 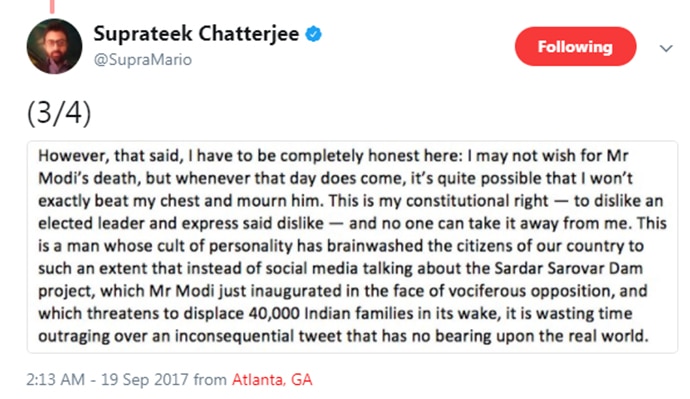 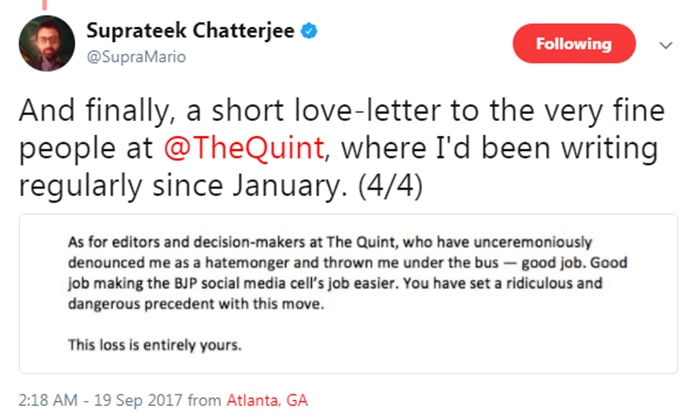 But will his detailed explanation be of any use? A narrative has already been created about the supposed toxicity of Left-liberal journalists and a dangerous precedent – of bending over backwards to accommodate the need for a bias towards fairness, and indulging in false binaries – has been set.

Quite recently, Bennett, Coleman & Co Ltd (BCCL), the publishers of Times of India among various other media publications, drafted a rather controversial social media policy for its employees.

Among the various facets of this policy was a guideline that advised journalists from the organisation not to state their political preferences, or say anything that would compromise their impartiality. The guidelines also added that neither can one “like, favour, recommend, or support comments or posts from politicians, bureaucrats, or anyone in a partisan or controversial position” or “repost or retweet updates from others that can be perceived as an implicit endorsement of a specific viewpoint or fact”.

In the age of social media, quick reactions and cutting opinions thrive. While it can be argued that social media has turned everyone into a self-important figure providing them with a pulpit for their opinions, it should be noted that journalists have always held opinions and these are the very views that have sculpted today’s media sphere and, by extension, a functioning democracy.

Is it then right for a reputed media house to act so brashly over something as innocuous as a "dark" birthday wish? You tell me.

Post your comment
#Liberal Media, #Social Media, #The Quint, #Narendra Modi
The views and opinions expressed in this article are those of the authors and do not necessarily reflect the official policy or position of DailyO.in or the India Today Group. The writers are solely responsible for any claims arising out of the contents of this article.