Budget 2021: How push for highways and health can have a multiplier effect on Indian economy

Infrastructure push can help wean surplus, and possibly unproductive, labour away from agriculture. Spending on health can save productive, precious lives.

India first woke up to the vast benefits of massive road construction during 1998-2004 when under the then PM Atal Bihari Vajpayee, an ambitious Golden Quadrilateral Project was initiated to spruce up road connectivity across major industrial, agricultural and cultural centres of India. At 5,846 km of road construction executed in less than a decade, this project was an important catalyst in spurring economic growth in the country, the results of which were ironically visible during UPA 1. It goes without saying that UPA 1 and 2 eventually squandered away the advantage and highway construction itself went on to become a huge casualty during that era, resulting in an abysmal single-digit highway construction per day at the time when the NDA government took over in 2014.

From 2014 till now, under PM Narendra Modi, the turnaround in highway construction is nothing short of extraordinary. Even during the pandemic months, Road Transport and Highways Minister Nitin Gadkari ensured that there was no let-up in the pace of road construction. Between April and December 2020, the worst Covid months for the country, the average daily road construction stood at an impressive 29 km per day, just 1 km short of the previous financial year. It is against this backdrop that the whopping 32% increase in capital outlay for the ministry of road transport and highways (MoRTH), at a record Rs 1,08,230 crore, becomes the country’s most crucial investment for the years ahead. 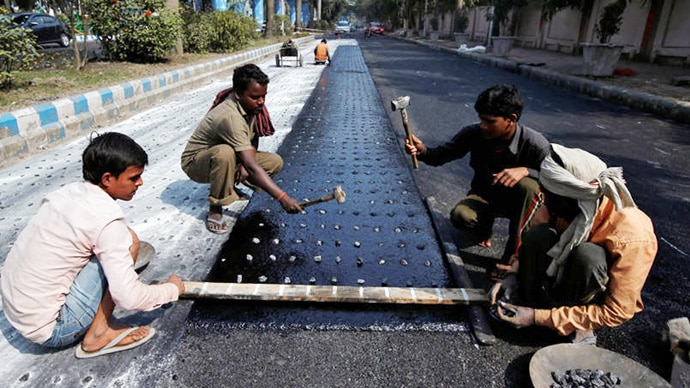 The turnaround in highway construction is nothing short of extraordinary. (Photo: Reuters)

The multiplier effect of this investment can be better understood if one takes a look at the flagship highway projects outlined in the Union Budget. Take for instance, the ongoing ambitious 1,350 km Delhi-Mumbai Greenfield Expressway, the remaining 260 km of which is proposed to be awarded before March 31. Apart from providing seamless connectivity to at least a dozen cities in its vicinity, which includes Indore, Udaipur, Ajmer, Vadodara, Ahmedabad among others, this highway project will reduce commute time between Delhi and Mumbai to nearly half, resulting in annual fuel savings of 32 crore litres and reduce CO2 emissions by 85 crore kg. Another important flagship project outlined in the Budget is the upgrade of the crucial Kolkata-Siliguri highway. This highway connects the two most important commercial hubs of Bengal, besides running through almost the entire state from north to south. It goes without saying that this highway is crucial for stimulating economic activity in the state.

Now the slew of highways being undertaken currently carry massive benefits beyond the obvious ones. While the more obvious benefits are birth of new economic zones, decongesting cities, and improving the standard of living in rural areas, it is important that this avenue is used to wean surplus - and possibly unproductive - labour away from agriculture and provide them with alternative means of employment.

In the last couple of years, managing our surplus agricultural produce has been one of the key challenges. Managing the surplus stocks of wheat and rice has been a cumbersome problem. The highways can afford a temporary alternative to farmers to work in petrol pumps, food marts, construction activity, etc, thus giving them an option to escape the adverse phases of diminishing returns, besides creating a model of rural gig economy. Moreover, they provide an opportunity for strategic, institutional investing in warehouses along these new highways. At the same time, the new farm laws, when they finally see the light of day, are going to create tangible opportunities in rural entrepreneurship, with these highways being an enabler. Thus ironical as it may sound now, many of the solutions to India’s agricultural woes potentially lie in the new highways, which history might document better.

Equally significant in this year’s Union Budget in the proposed historic 137% hike in health and well-being spending, pegged at Rs 2,23,846 crore. While Covid vaccination forms an important component of this plan at Rs 35,000 crore, fortunately there is a fair balance in the allocation of funds.

The critical importance of health in shaping a country’s economy over the next decade or so, can’t be underscored enough. Let me explain this with a simple example. The USA, as of today, has reported nearly 4.5 lakh Covid fatalities. The figure, extrapolated to the Indian population, would equate to nearly 18 lakh deaths. In comparison, India’s actual death count is 1.55 lakh. Thus, by saving precious lives, especially in the employable age group, India’s GDP has been adequately shielded from the savage onslaught of Covid.

India’s leadership in combating the Covid scourge has rightly set a strong foundation for the country to be really ambitious on the health front, without limiting our focus merely to Covid or its mutations. This obviously requires a huge sprucing up of the country’s health infrastructure. We must aspire to be the research capital of the world. We must generate opportunities of medical tourism. This is also the right time to initiate a massive overhaul of government hospitals and bridge the disparity between rural and urban India. High-grade cancer care facilities need to be made available across the country. In fact, the locations of some of these cancer facilities can be strategically clubbed with the ongoing construction of new highways.

Never before has a Union Budget generated so much optimism. This Budget, with its right intent, is just the tip of the iceberg. BJP’s innovative leadership will create many more opportunities at the level of execution, than those which are presently visible, a right step forward towards emerging as Vishwa Guru.

#Covid, #Infrastructure, #Budget, #Budget2021
The views and opinions expressed in this article are those of the authors and do not necessarily reflect the official policy or position of DailyO.in or the India Today Group. The writers are solely responsible for any claims arising out of the contents of this article.