Too many similar incidents point towards a bigger problem in the company’s work culture.

United Airlines is in news again, and just like before, for all the wrong reasons.

According to a PTI report, Navang Oza, a 37-year-old US citizen of Indian origin claims that United Airlines cancelled his flight reservation because he filmed his altercation with their employee. Oza said that he was refused entry on a flight to San Francisco from New Orleans, after he started recording the experience on his cell phone.

Oza was told, according to reports, that the fee for his bag (that weighed more than the standard permissible amount) would be $300. When he complained, stating that he was charged $125 for the same piece of luggage on his trip to New Orleans, he was not given a satisfactory answer. It was at that moment when he started recording a video of the exchange.

Shortly after he began recording, the United Airlines employee told him, “You do not have my permission to videotape.”

Oza continued to record their conversation for over two minutes, in which he clearly states that he never refused to pay, but only enquired about the fee hike. During this time, the employee in question seemingly began recording his video as well, while placing a call to the airport police, as he told the employee that they have horrible customer service. Evidently.

"I was shocked because I didn't know she had the right to cancel my flight because I started recording," said Oza to KNTV. Once the police officer arrived, Oza asked him if it was within his rights to keep the recording. The officer told him, "Sir, you have the right to do whatever you want; it's a public space.”

While Oza ultimately re-booked his flight on a different airline, an incident like this is not good news for the United Airlines, which has, thanks to recent events, gained a horrible reputation in customer service.

“The video does not reflect the positive customer experience we strive to offer, and for that we apologise. We are reviewing this situation, including talking with Mr Oza and our employees to better understand what happened,” United Airlines said in a statement. 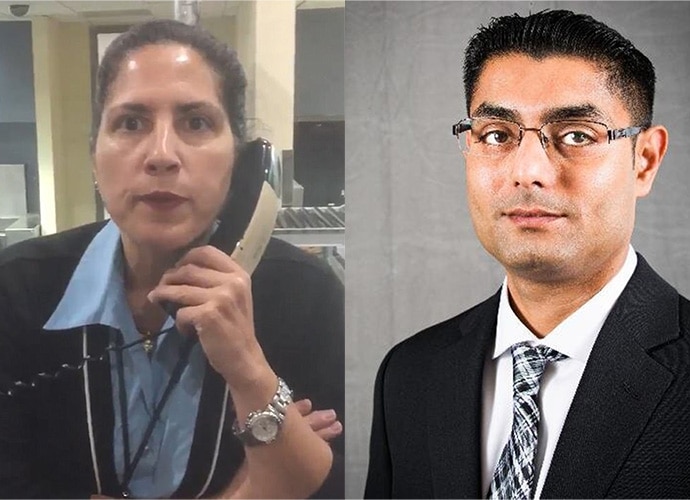 Earlier this week, Nicole Harper, a woman from Missouri claimed that a United Airlines staff member forced her to urinate in a cup rather than leave her seat to use the restroom on a flight from Houston. While the airline acknowledged that Harper did indeed urinate in a cup, they say it was her decision and not the airline’s. In a statement, the airline said Harper attempted to visit the restroom during the plane’s descent and was told to remain seated, with her seat belt on.

Harper, however, said the incident happened midway through the flight, while flight attendants were handing out drinks, not during the airplane’s descent. Harper also added that although the pilot had turned on the seat-belt sign, the United crew members allowed other passengers to use the restroom.

But the most notorious United incident took place last month, where the crew dragged an elderly passenger off the plane, claiming that the flight was overbooked. Videos posted online by co-passengers showed a man of Asian origin, screaming as officers dragged him from his seat on United Flight 3411 before it departed from Chicago O’Hare International Airport to Louisville, Kentucky.

In the video, it can be seen that the man was dragged down the aisle, on his back by his hands. His body appeared limp and his mouth was bleeding.

The videos of this incident severely dented United Airline’s reputation, as it garnered an extraordinary amount of criticism on social media, after which it was taken up by the international media. Oza’s incident is going to do nothing to help that.

United Airlines now has way too many incidents like these surrounding it, and it points towards a bigger problem in the company’s hygiene and work culture. What the airline company needs immediately is a PR miracle.

What it should do, however, is introspect and figure out just where they are going wrong.