Those who only strongly assert themselves while saying 'no' to questions like 'Am I looking fat?'

According to studies, women can actually smell the testosterone.

I so wish it was easy to find these women! Because the battle of testosterone is way easier than the battle of emotions which women love to play every now and then, without giving any signals. If I got a rupee every time a woman said, ‘I would love a man who would be a friend first’, I could have bought the Rafale jets the Modi government didn’t buy.

But alas! I didn’t get a rupee.

Instead, I got plenty of experience.

Here's what I learnt:

Don’t even say it in front of a woman ever. Yes, they like to be complimented, pampered and loved to the moon and back. But brothers, you are in troubled water if you even make them conscious about this. (Because who doesn’t love to be complimented).

Pay attention to details. Not enough to point out her faults, but enough to notice that she is wearing a different lipstick shade.

Similarly, cry in front of her because mard ko bhi dard hota hai — but don't become a crybaby. 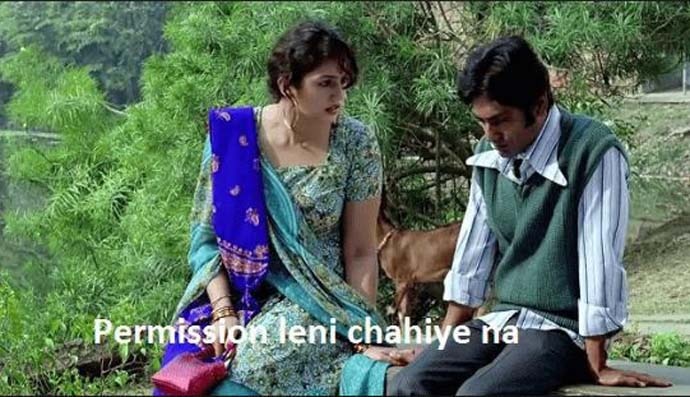 Ask. Talk. But shut yourself up when she is not in the mood. (Photo: Twitter)

2.). Men who ask (for directions and permission)

Okay. So when we are concentrating on Google maps and playing a mental toss-up between right and left, the women in your life want something very plain and simple. Stop the car. Pull down the glass and call a random person and ask the direction.

There’s something that makes them feel that every passer-by is a local and by default, possesses more knowledge than both the man and the Google map.

Asking is very important. Be it direction or permission.

You make women smile — chances are, you are always flocked by women. But, chances are also that this is also the reason on which you will have a deadly fight with your girlfriend/partner/wife.

There can be two kinds of scenarios:

A. Your girlfriend/partner/wife will think you crack jokes only when there are women around you. So, this is actually your pick-up strategy.

B. You will crack a joke when she is not in the right mood. You will be called insensitive. Frivolous. Depth-less

So, women love men with a sublime sense of humour, topped with a strong sense of timing — both not applied to other women.

To pay or not to pay. That’s the question. If you pay the restaurant bill, you are imposing your authority, dismissing the fact that she can also pay for herself. If you want her to pay it all, then in all probability, she will never go out with you. So, shall we go Dutch?

Wait. That’s also a lack of courteousness, depending on how long you guys know each other.

If she initiates sharing the bill, don’t jump onto it either.

Ask politely, ‘Are you sure?’

This is a different context altogether.

Am I looking fat? Say a quick and strong ‘No’, taking a very quick look. (Don’t even waste time to figure out the actual answer to this question). Only in such situations, stick to your point, even if she tries to misguide you.

In other situations, be passive. Preferably, don’t exist (mostly).

#Romance, #Relationship, #Love, #Valentines day 2019
The views and opinions expressed in this article are those of the authors and do not necessarily reflect the official policy or position of DailyO.in or the India Today Group. The writers are solely responsible for any claims arising out of the contents of this article.