Viral video from Pakistan shows driver stopping an entire train to get dahi. We don't know how to react

In Pakistan, a train driver stopped his entire train mid-journey because he had to - hold my bowl - get dahi. Curd, yes.

It was probably a dark, chilly night and maybe a mother in Pakistan (or a wife) was cooking biryani for dinner. She might have realised ki arre Biryani to ban jaayega lekin raita ke liye dahi to hai hi nai. She might have done what every Indian mom (or wife) does in a situation like this. She might have called her son (or husband) and said: "Beta, ghar aate waqt zara dahi leke aana." He being the obedient son (or husband) might have done exactly so. Little did he know that his obedience and his haphazard work-life balancing moves would get him suspended from his job.

This may or may not be the actual story, but some parts of this actually happened in Pakistan recently.

Inter-city train driver in Lahore gets suspended after making unscheduled stop to pick up some yoghurt.#pakistan #Railway #ViralVideo pic.twitter.com/n6csvNXksQ 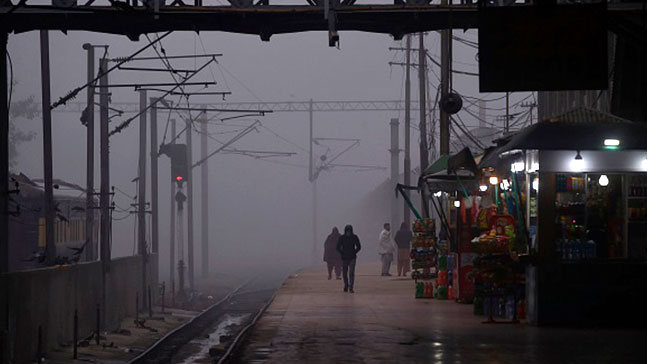 A Pakistani train driver, Rana Mohammad Shehzad and his assistant Iftikhar Hussain, made an unscheduled train stop to purchase curd near a railway station in Lahore. The assistant collected the curd from a stall, climbed into the carriage, and the train then made a move. As the video went viral, authorities had to take notice and act. Pakistan's Minister for Railways, Azam Khan Swati, subsequently suspended both the train driver and his assistant.

WHAT THE OFFICIALS SAID

The viral video invited criticism for the railway ministry, which was already facing flak for accidents, lack of safety and declining revenues. Thus, the minister took to suspending both the train driver and the assistant to send a clear message, and stated that she would not tolerate such events in the future or allow anyone to use national assets for personal use.

Syed Ijaz-ul-Hassan Shah, a spokesman for the railway ministry told AFP, "When you stop a train in the middle (of the tracks) it becomes a safety issue. Safety is our priority. We cannot tolerate anything which compromises safety."

Though some saw it in a hilarious light, some rightfully questioned the safety and regulation of Pakistan railways as train accidents and mismanagement are common in the country.

Do you run errands on the way to work? (Please don't if your work is driving a... train!)

#Viral Video, #Pakistan viral video, #Pakistan train driver, #Pakistanrailways
The views and opinions expressed in this article are those of the authors and do not necessarily reflect the official policy or position of DailyO.in or the India Today Group. The writers are solely responsible for any claims arising out of the contents of this article.