I went viral for singing while cycling across the Brooklyn Bridge

Pretty insane to turn on your computer and discover 350,000 people have been watching a video of you that you never knew was recorded.

I ride my bike everyday in NYC. I love it with one major exception: the Brooklyn Bridge. The prettiest bit of construction in New York is usually a Hobbesian nightmare as pedestrians and cyclists try to share a path built in the 19th century. The bike lane isn't well marked, and it's usually full of tourists looking at their phones to take a good photo. I have long tried to shout at people to get out of the way but they rarely hear you above all the noise.

That is until I discovered, however, the key to unlocking the madness.

I was in particularly good mood this New Year's Eve, having seen a great concert the night before, and instead of shouting like usual, I was so happy I just felt like singing. It was amazing; instead of tourists giving you stares of death, they broke into smiles of warmth. And more importantly, they moved out of the way.

I didn't realise I was being filmed, and I didn't know this was on the internet, until I looked at Reddit one day and discovered I was on the front page. I guess the lesson is that both bicycles and the internet are amazing things. 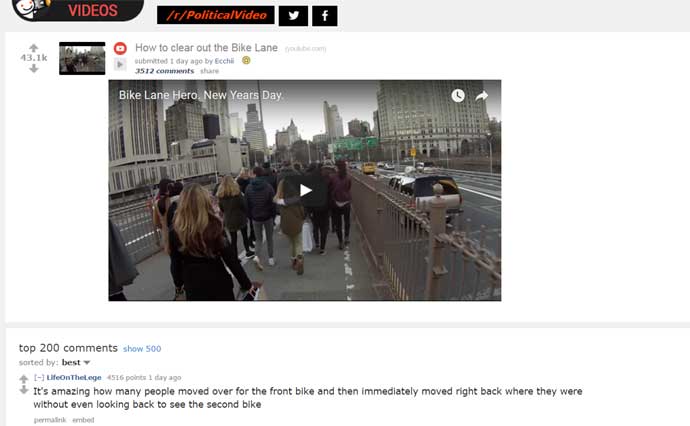 Both bicycles and the internet are amazing things. (Photo: Screengrab/Reddit)

Also read: What do you get when you watch 6,000 matchsticks burn all at once?

#Viral Video, #New York
The views and opinions expressed in this article are those of the authors and do not necessarily reflect the official policy or position of DailyO.in or the India Today Group. The writers are solely responsible for any claims arising out of the contents of this article.