What is happening in Kazakhstan? The crisis, summed up in 7 points

The protests in Kazakhstan due to fuel price rise has escalated into one of the deadliest protests the country has ever seen. What is the whole crisis all about?

The oil and gas, and uranium-rich Central Asian country Kazakhstan is facing its worst crisis in 30 years. The country, which gained independence from the Soviet Union in 1991, was since led by Communist leader Nursultan Nazarbayev until 2019, when he vacated the post. However, he had picked his man Kassym-Jomart Tokayev as his successor and Nazarbayev held the reins of the government.

In a poverty-stricken country where half the population lives in penury, the fuel price rise led to massive resentment among the people. Disappointed and furious over the inefficiency of the government in failing to provide for its people despite being an oil-rich nation, people are now on the streets. The situation is out of control. Russian forces are in Kazakhstan to bring back normalcy.

The current situtaion is that the Russian paratroopers have succeeded in stabilising the situation, and the government is switching on the internet services in some parts of Kazakhstan. The government also says that it will monitor the actions on social media and won't let people spread chaos online.

President Tokayev has thanked the Presidents of Russia, Aremenia, China, and other international organisations for their support to Kazakhstan.

Tokayev thanks presidents of Armenia, Russia, China and etc, and other international organizations for the support of Kazakhstan. Says that anarchy leads to violation of human rights. Mentions his initiative on new law of public assemblies and says that some activists ⤵️

WHAT IS HAPPENING IN KAZAKHSTAN?

Here is a quick lowdown, in 7 points:

The electronic trading of Liquified Petroleum Gas, LPG, that began in 2019 and ended on first day of this year led to incessant rise in fuel prices and this was the trigger of the crisis in Kazakhstan. The move was depicted to end the subsidising of prices for the domestic fuel consumer, and instead, allow the market to dictate the prices, media outlet Eurasianet reported. This also meant that all the oil trading in the region will happen over online trading platforms with the exception of sales to industrial consumers and a few other cases. 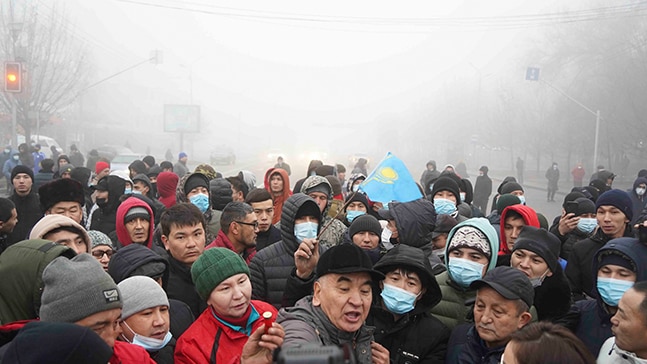 The online trading led to doubling of LPG costs; LPG being the primary fuel people use for powering their vehicles, and most people in the country could no longer afford fuel. People in Kazakhstan are cash-starved and save money to even buy meals. According to the World Bank, half the population of world’s ninth largest country, Kazakhstan, lives in rural parts and in extreme poverty. The protest started in western Kazakhstan’s Mangystau region because it is also the most impoverished part of the country.

Kazakhstan is rich in oil and gas and other resources, while its population, especially in the western part of the country, is very poor. A majority of the poor feels betrayed that the economy of the country has benefited only the elite. Around 1 million of the 19 million population of Kazakhstan are estimated to live below the poverty line. As the protest expanded to other cities of the country including the biggest city Almaty, the government forces resorted to baton charge. But since the protests swelled to levels that Kazakstan hadn't seen in 30 years, it spiralled beyond control.

According to freelance journalist Aigerim Toleukhanova, who spoke to DW News, the angry protesters had also taken over the Almaty airport on Wednesday, burnt down the prosecution office, and burnt the city hall of Almaty. According to ground reports, the protests may gradually spread to several towns and villages of the land-locked Central Asian country.

Seeing the widespread protests by the people, President Kassym-Jomart Tokayev declared emergency for two weeks in Almaty as well as Mangystau province.

Prime Minister Askar Mamin also resigned over the scale of the protests, but the ministers remain at their posts until a new Cabinet is in place. Meanwhile, Deputy PM Alikhan Smailov has taken over as the PM.

President Tokayev, hours after accepting the resignation of PM Mamin, also asked the Cabinet to reinstate price controls in LPG, but that didn't quite have the desired effect. 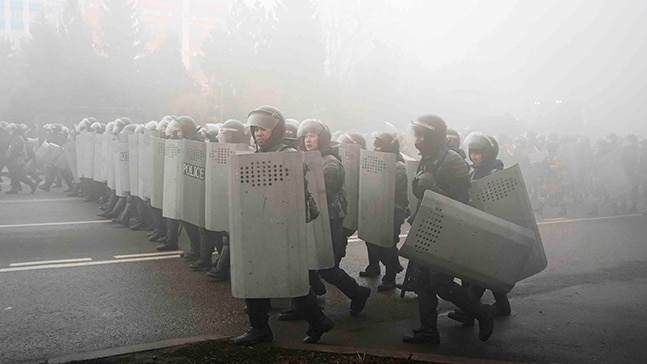 On Thursday, January 6, Russia sent its paratroopers to Kazakhstan to quell the protests and bring normalcy, news agency Reuters reported. According to the police, 18 security personnel have died in the fighting, with two found decapicitated. More than 2,000 protesters have been arrested. The armed forces on Thursday also took control of the Almaty airport, which had earlier been seized by protesters.

6. WHY RUSSIA SWUNG INTO ACTION

One reason why Russia got into action within no time is because an uneasy Kazakshtan is bound to severely affect Russia's energy stakes and requirements. Kremlin has high stakes in the oil and uranium-producing Kazakhstan, and an anarchy on the streets means Russia too suffers.

In late 2020, Moscow intervened to halt a war between Azerbaijan and Armenia, and also amassed troops near Ukraine, which Russia had invaded eight years ago. Russia wants to safeguard its influence in the ex-Soviet Union with force, and its present actions are an indication of that only.

President Kassym-Jomart Tokayev has called it an international conspiracy, Reuters reported. He said that foreign terrorists are repsonsible for seizing building and weapons.

"It is an attack on our citizens who are asking me... to help them urgently," he said.

Russia too supports Tokayev’s assertion that the crisis in the oil-rich country is a foreign conspiracy and it would help Kazakhstan up its “counter-terrorist operation”. However, neither Russia nor Kazakshtan has been able to provide evidence to back their claims.

#Kazakhstan protests, #Kazakhstan fuel price rise, #Kazakhstan
The views and opinions expressed in this article are those of the authors and do not necessarily reflect the official policy or position of DailyO.in or the India Today Group. The writers are solely responsible for any claims arising out of the contents of this article.