Why spillover of Kashmir militancy into Jammu, Punjab and Delhi is more worrying

A Kashmiri student of Sharda University, who went missing, has reportedly joined an ultra-radical militant outfit.

The New Delhi-driven, no-holds-barred military crackdown in the Kashmir Valley is bringing on unpredictable consequences.

While on one hand, the nightly CASO (cordon and search operations) and rising militant killings are leading to a worrying surge in new recruitments, sustained pressure by the security forces seem to be driving many terror outfits outside the Valley, to the usually militancy-free Jammu region, Punjab, and perhaps even Delhi.

The November 1 assassination of Anil Parihar, the Bharatiya Janata Party’s state secretary in Jammu & Kashmir, and his older brother Ajit Parihar, came as a shock to the J&K police, which declared the mountainous districts of Jammu “militancy-free” years ago.

The twin killings in the centre of Kishtwar town came as a confirmation that Pakistan-backed terror groups like the Hizbul Mujahideen (Hizb), Lashkar-e-Taiba, and the long-forgotten Harkat-ul-Mujahideen (HuM) had succeeded in establishing more than just a foothold in the Jammu sector.

The Parihar brothers were gunned down, probably with easy-to-conceal handguns, not far from their home shortly after sunset.

It was the first successful militant strike in the Chenab Valley since 2011.

The Kishtwar killings came in the wake of at least a dozen or so arrests of Hizb and HuM militants and overground workers (OGWs), including the recovery of firearms and incendiary weapons since May this year. The Parihar brothers (Anil Parihar in photo) were gunned down not far from their home shortly after sunset. (Photo: Facebook)

Intelligence officials have concluded for long and it is now evident that the OGWs are actively engaged in encouraging local youngsters to join militancy.

This October, Jamal ud Din, a local of the Keshwan area, showed up on social media attired in military fatigues and brandishing a Kalashnikov rifle.

Since rechristened ‘Abu Bakar’, he is among the newest members of the Lashkar-e-Taiba in J&K.

This is similar to the widespread Hindu-Muslim clashes in 2001, after militants killed about 17 Hindu shepherds in the area.

But while the trouble in Kishtwar is a concern, what is really worrying about India’s security establishment is the spillover outside Jammu & Kashmir.

Around 7.40pm on September 14, a series of explosions hit the Maqsudan police station in Punjab’s Jalandhar city.

More than a month of collaborative investigations between the Punjab and J&K police have now revealed that four Kashmiri students who enrolled at Jalandhar’s St Soldier College of Engineering and Technology carried out the audacious attack.

The appointed commander of the Hizb in the Valley after Burhan Wani was killed in July 2016, and Musa quickly found himself marginalised within Kashmir’s terror hierarchy after he questioned Pakistan’s role and threatened to “behead” the Hurriyat separatists in 2017.

That is when he floated the AGH, which remained on the sidelines of the terror machine in the valley. 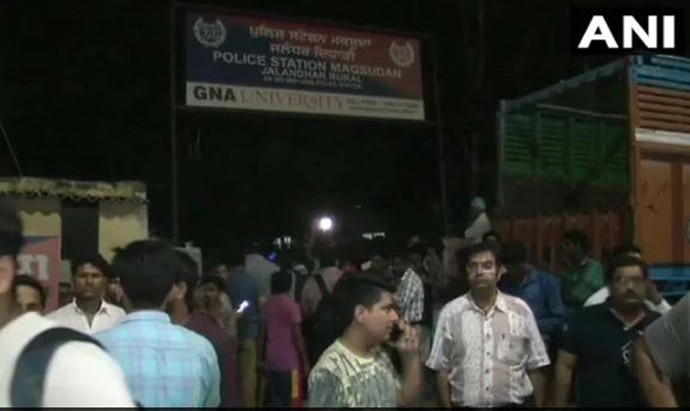 Jalandhar attack: The grenades used in the attack on the police station were in all likelihood sourced from the valley. (Photo: ANI)

Police officers say that Musa has since mended his fences with Pakistan’s Inter-Services Intelligence, which has evidently instructed him to operate outside the Valley — in Punjab and Delhi.

According to them, in August, a Kashmiri youth carrying seven hand grenades, was detained in Jammu.

These were meant to carry out random attacks in crowded spots in the national capital.

In the Maqsudan case too, Rouf and Umar flew in from Srinagar to Chandigarh on September 13. They took a bus up to link up with Qayoom and Bashir, who had travelled by road from Kashmir to Jalandhar.

The grenades used in the attack on the police station were in all likelihood sourced from the valley. Qayoom and Bashir have since been arrested and are presently in the custody of the Jalandhar police. Their accomplices are absconding. Police say the four students from Jalandhar aren’t the only Kashmiri youth suspected of being involved with the AGH and other valleybased militant outfits.

A number of others have been recently nabbed from local university and college hostels, where many of them are pursuing courses paid for through central scholarships.

The most recent instance is that of Ehtisham Bilal, a native of the Khanyar locality in downtown Srinagar, who went missing on October 28.

A student of Sharda University in Greater Noida, Bilal who went missing on October 28 may have been upset after being mistaken for an Afghan student and roughed up on the campus.

Four days later, he showed up on social media as a new member of the Islamic State (JK-IS) group known to be active in the Kashmir valley.

Many in the intelligence establishment view the expanding terror footprint as the ISI’s bid to re-operationalise its erstwhile K2 (Kashmir-Khalistan) plan.

#Jammu and Kashmir, #Militants, #Kashmir, #Terrorism
The views and opinions expressed in this article are those of the authors and do not necessarily reflect the official policy or position of DailyO.in or the India Today Group. The writers are solely responsible for any claims arising out of the contents of this article.