Wordle removes 'fetus' from its answers. Just like slave, wench, fibre and agora

To keep itself out of the controversy over women's abortion rights in the US, Wordle has removed the word fetus from its answers. But only for US users.

Sharing your Wordle score on Twitter has become quite a trend in the last few months. Racking your brains in a game where the number of attempts to find the correct answer reduces with every try is fun and challenging at the same time. So it is pretty normal to start or end your day with some green, yellow and gray boxes.

Me when I win Wordle in 3 or less guesses. pic.twitter.com/GFXquCt5w4

But there are times when you enter a word and Wordle pops a notification which says: ''not in the words list''. Have you ever experienced that?

Recently, Wordle decided to remove the word fetus from its word list. Why? So that the game can be considered ''distinct from the news".

Some of you may have a different Wordle answer than the official answer. Please refresh your browser to receive the correct answer word. For more information, please read our editor’s note. https://t.co/3dY5nRu7yu

Politico, a media company, leaked a US Supreme Court draft opinion that indicated that the US top court was likely to overturn a case that protected women's right to have an abortion. A 1973 court case called as 'Roe v/s Wade' has historically protected the abortion rights of women.

But the current leaked draft, labeled as ''Opinion of the Court'', holds that Roe vs Wade must be overruled. As this draft puts abortion rights in jeopardy, the controversy has caused a ruckus all across the US.

And like any conscious company, Wordle, owned by New York Times now, wants to keep out of controversy by all means. Thus, it has removed the word fetus from its answers.

Only US users cannot use this as a word. In India, this still counts as a word. (We tried) Folks in India can still use fetus and lynch as words in Wordle.

Fetus isn't the first word to have been removed from Wordle's words list. Here is a list of other words that have previously been removed:

1. LYNCH - Lynch means ''to put to death (as by hanging) by mob action without legal approval or permission''. Though it is quite a well known word, the same was removed. And we don't know why.

2. SLAVE - Deemed to be insensitive or offensive, the word slave was taken out of Wordle's answers in February 2022. Users also noticed that words like whore, pussy and bitch were also removed by Wordle.

3. WENCH - The word wench is an alternative word for a prostitute. Since this was also deemed to be "insensitive or offensive'', it is no more on the Wordle's words list.

4. FIBRE - Fibre is neither insensitive nor offensive. So, its exclusion from the words list is not really clear. But there are a few guesses. First, it is spelled differently in different parts of the world. Fibre is the British spelling of the word, whereas the American English spells it as fiber. Some also say that fibre was removed because of the controversy surrounding Wordle 235 when humor was the answer despite those outside the US spelling it as humour.

5. PUPAL - Again, we do not know why this isn't in the words list for Wordle. 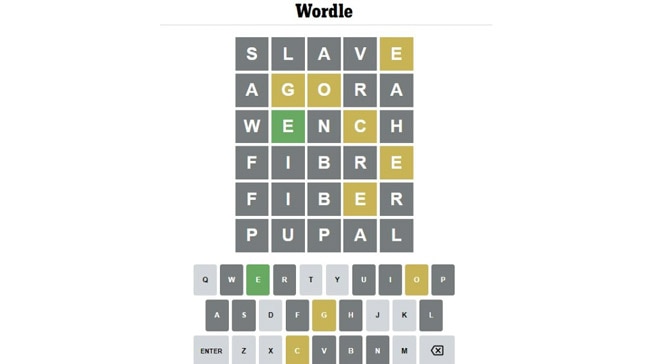 We tried using these words on Wordle and it looks like these still count as words in India.

What do you think about these words that have been removed from the list?

#Excludedfromwordle, #Slave, #Fetus, #Wordleanswers
The views and opinions expressed in this article are those of the authors and do not necessarily reflect the official policy or position of DailyO.in or the India Today Group. The writers are solely responsible for any claims arising out of the contents of this article.