20 million children not vaccinated in 2018. Are the anti-vaxxers gaining ground?

More than one in 10 children across the world did not get vaccinated against life-threatening diseases and are at potential risk. Do we still accept the anti-vax theory?

While the data says that more than 100 million children were vaccinated in 2018 — standing at 86% of the children vaccinated, the numbers are far short of 95% mark that guarantees protection against outbreaks of vaccine-preventable diseases.

20 million children worldwide – more than 1 in 10 – missed out on lifesaving vaccines such as measles, diphtheria and tetanus in 2018, according to new data from @WHO and @UNICEF. https://t.co/WWBBFusqHi

The data says that most — almost half of the unvaccinated children — are in just 16 countries in the world. While these are the poorest and conflict-ridden nations, the developed world is not impervious to outbreaks either.

In fact, the vaccination against measles, that the survey uses as an identifier to examine the vaccination rates, has seen an alarming number of outbreaks and deaths in recent years. Reported cases of measles rose by a whopping 300% in the first three months of 2019, compared to the same period in 2018. As compared to 2017, the year 2018 saw more than twice the number of cases reported — 350,000 cases in 2018 alone.

In a press release, Henrietta Fore, UNICEF’s executive director, said, “Measles is a real-time indicator of where we have more work to do to fight preventable diseases. Because it is so contagious, an outbreak points to communities that are missing out on vaccines due to access, costs or, in some places, complacency. We have to exhaust every effort to immunise every child.” The opposition to vaccines is as old as the vaccines themselves. (Photo: Reuters)

However, what is alarming is the measles outbreak in the developed world. From the start of this year till July 11, 2019, USA has seen 1,123 individual cases of measles, according to Centers for Disease Control and Prevention (CDC) — America’s national public health institute. This is the greatest number of cases reported in the country since 1992, and since measles was declared eliminated in 2000. Children under the age of five accounted for half of the cases.

This brings back the theory of the anti-vaccine (or anti-vax) movement that originated in France but has been very popular among the Americans. In fact, the anti-vax movement has been furthered by some celebrities, who are anti-vaxxers themselves.  The list includes Charlie Sheen, who fought a legal battle against ex-wife Denise Richards to try and block her from vaccinating their children. Sheen lost the case, and was reportedly so bitter that he paid the paediatrician bill entirely in nickels! 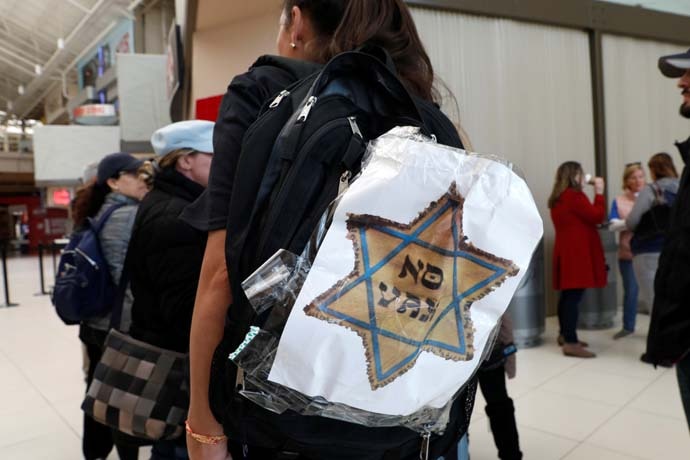 Belief over children’s health? A woman opposed to childhood vaccinations wears a "No Vax" sign on her backpack as she takes part in a demonstration after children not vaccinated against measles are banned from public spaces in New York. (Photo: Reuters)

Measles is not the only disease against which anti-vaxxers have waged a war. America is famous for its pox-parties in which parents arrange and encourage their healthy children to interact with the ones who are infected with the disease. This is ostensibly done to deliberately infect their children with the virus. The principle of these pox parties is the same as a vaccination — in which a dead or weakened form of the virus is injected into the system, and it stimulates the antibodies to recognise the virus without making the children sick. However, while vaccination offers a far less onerous and risky alternative, the pox-parties are potentially life-threatening.

The opposition to vaccines is as old as the vaccines themselves. In America, the varicella-zoster vaccine came out in 1995. However, children were encouraged to go to pox parties from much before. According to CDC data, the major outbreaks of measles were observed in New York and Michigan, where the anti-vax movement is most powerful. Other outbreaks were centred around the West Coast where the movement is gaining ground. While children in the under-developed world who are not vaccinated are at risk of the severest health consequences, and least likely to access lifesaving treatment and care, the children in the developed world are worse-off. They are caught up in their (relatively wealthy and better-off) parents' irrational and unfounded beliefs.

The question remains unanswered whether the belief system of the parents is stronger than ensuring children’s health and a healthy generation. With life-threatening and maiming diseases like measles on the rise, it is time we ask ourselves if it is worth it.

Also read: Taking the kids to a 'pox party': Welcome to new-age American parenting. It's not pretty

Post your comment
#Children health, #UNICEF, #World Health Organisation, #Anti-vaccination movement
The views and opinions expressed in this article are those of the authors and do not necessarily reflect the official policy or position of DailyO.in or the India Today Group. The writers are solely responsible for any claims arising out of the contents of this article.