10 years of Kandhamal pogrom: Churches must not allow Hindutva to pit Dalits against Adivasis

The question is not how many were killed, raped and what the consequence of this violence was. In the end, it is just about why there no justice.

This world, in particular this country, through the decade, has only become worse in terms of morbid violence, religion being the basis of much of it. Pluralism is not allowed to exist, let alone flourish. The voice of dissent against violence and crimes is suppressed and intimidated in no time. Prime Minister Narendra Modi recently asked: why should I be blamed? As the diverse phalanxes of his supporters continues to grow, seeking justice for a minority atrocity given the complex manipulations of caste, class and tribe seems impossible. Yet, one overruling ideology – Hindutva – is behind these manipulations and Modi and his ilk are definitely to blame.

Kandhamal was a grave massacre. Some put the death toll at 31, others at more than 100; still others believe as many as 500 lives were lost — there is still much speculation surrounding it. My testimonial in this regard puts the number far ahead of all these figures. Kandhamal wasn't a day's episode. The massacre lasted for more than six months. In many ways, it continues till today as it has for decades before 2008. A picture of Jesus lies desecrated after the violence. Photo: Reuters archive

The question is not how many were killed, raped and what the consequence of this violence was. Almost 300 churches were destroyed, yet it is never about the properties damaged and the loss endured. In the end, it is just about why there no justice.

The answer is complex. Violence erupts when properties of Dalit and Adivasi Christians are plundered. Who is behind this violence? It was provoked by some, executed by many, and furthered by still others. One of the most disturbing aspects was that Adivasis (Kandha, seen as Hindu) were pitted against Dalits (Pana, seen as Christian). The Hinduisation of the Kandhas over decades was used strategically as was the communalisation of their conflict with the Panas.

It is not well known that neither community is watertight in terms of these identities nor that both these communities were being used against each other by Hindutva outfits. The poorest Christians of both communities suffered the most, showing how class intersects with communal violence.

It is recorded that saffron propagandist Laxmanananda Saraswati, a self-proclaimed Swamiji, arrived in Kandhamal soon after Odisha passed an anti-conversion law. His endeavour was to make sure that Dalits and Adivasis never climbed the social ladder in terms of economic and social mobility.

Hence, he targeted three agencies — Christian mission centres, NGOs and Maoists — as the prime causes of this social, religious, economic and political elevation of Dalits and Adivasis.

The August 2008 pogrom’s prime target were Kandhamal’s Christians. Christian is seen as foreign, and anything foreign and related to blood and spirituality (Jesus' death, blood, teachings and resurrection, all stick whips against the Hindu norm) is seen as polluted. And, so, they had to be vanquished. Swamiji started sowing seeds of hatred, provoked the local Hindus and strengthened their caste bias.

But the Christians were just a smokescreen. The story of political economy behind the façade of the anti-Christian violence — the lesser known truth — is that the so-called Swamiji's movement also contributed to the emergence of several mining and other MNC projects that evacuated the natural habitat of the Dalits and tribals of the land, a process which Christian, NGO, and Maoist resistances were thorns. Swamiji's interventions sought to denude all possibilities of growth and personal development of the Dalits and tribals but also destroy any resistance to global capitalism’s megalomaniac plans. That these MNCs are all foreign, many Christian, is not a problem at all, which shows Hindutva’s hypocrisies. Money knows no religion. 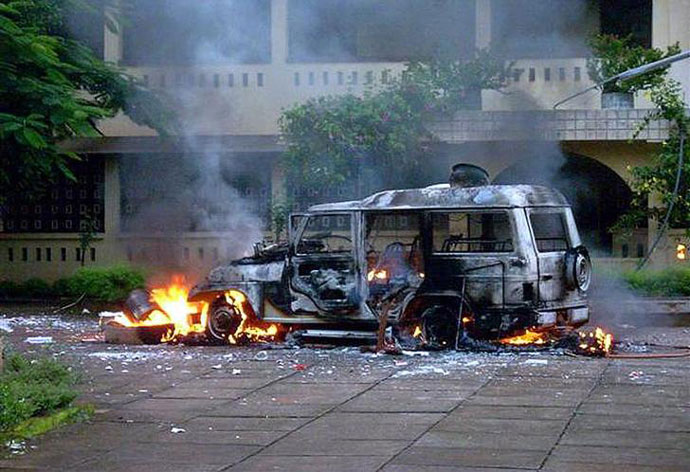 There is no justice in sight. Photo: Reuters archive

The violent Hindu fascist political alliances grouped together to finance and strengthen the hands of Swamiji's coterie. This triggered the nerves of the militant rebel group. Yet, the Maoists claiming the murder of Swamiji as their handiwork never calmed the situation. It only furthered the violence because the so-called Hindu fringe groups projected these revolutionary Naxals as the friends of Christians but, more importantly, found unarmed and poor Christians – Dalit and Adivasi – much easier to attack.

The judiciary, systems of governance in this country are run by Brahminical ideologues. The footsoldiers who do the dirty work are several OBCs and, as we see in Kandhamal, even Dalits and Adivasis.

Gone are those days where one had to be a Brahmin to provoke such execution, today the country is ruled by the nexus of Brahmin judiciary, OBC goons and the Dalits and Adivasis pitted against each other by the overarching Hindutva parties.

This nexus is a phenomenon that researchers and the media have not examined.

The denial of justice, the imprisonment of seven innocents still languishing in jail (while thousands of official complaints have come to naught), loot and truncated and missing compensation all show the country’s concern for Dalits and Adivasis.

Meanwhile, the goons and political allies of the BJP, VHP etc are all walking free with impunity. This shows the hollowness of Indian democracy.

As part of the plans to commemorate the tenth anniversary of this dastardly event in history, many Churches in India, which have been more or less shamefully silent on this horror, must come together not only to memorialise the loss of so many lives but also to vow that such a crime, such pitting of the marginalised against one another and such a silence around violence will never be repeated.

#Adivasis, #Christians, #Dalits, #Hindutva
The views and opinions expressed in this article are those of the authors and do not necessarily reflect the official policy or position of DailyO.in or the India Today Group. The writers are solely responsible for any claims arising out of the contents of this article.

Author is a Bangalore-based pastor.