Does Modi government care more for ABVP than students, teachers?

We are sliding towards becoming an illiberal democracy, where rule of law is routinely compromised at the altar of majoritarian sentiments.

With the tacit approval of ABVP, the government has collaborated in violence against students and teachers.

ABVP activists beating up DU students staging a protest was appalling enough, but what makes it even more directly dangerous for our democracy is the government's silence, even tacit approval, of their behaviour.

Venkaiah Naidu warned of universities becoming "labs for separatist experiments", and claimed that "certain misguided sections are trying to mislead young population and create social tensions and hurt the sentiments of the people of India".

The urbane, cosmopolitan face of the government Arun Jaitley informed the London School of Economics that "an alliance of subversion" has taken over college campuses, and said -"I personally believe that free speech in India and in any society has to be debated”.

Kiren Rijiju, the man tasked with enforcing law and order, was publicly dismayed over the "polluting" of young minds.

Not one word on ABVP hooliganism. What we had instead were ministers, one after another, come out on a public platform and effectively justify, and legitimise, violence on students and teachers by politically affiliated goons.

The government's clear response has been to further demonise the objects of ABVP's violence, forget condemning the perpetrators.

They won't utter a word, of course, because ABVP and the government have stuck a grand bargain. The terms of this bargain are simple. The chief ideological policy of this government, aggressive nationalism, would be enforced on the ground by politically affiliated hooligans, such as the ABVP, aided by an online army of trolls and keyboard nationalists.

In return, the government would provide carte blanche to ABVP in university campuses, to go and resolve matters as they see fit, including with violence. The police and the university administrations seem to have tamely acquiesced in this understanding.

It is especially chilling when the government publicly opines that violence is more palatable, and less dangerous, than slogans and hurting sentiments. Every time the government sides with vigilantism over rule of law, from the assault on JNU students in court premises to the attacks on DU students, we slide one step closer to an illiberal democracy, on the lines of Turkey and Philippines.

The television media, broadly speaking, under the Modi regime, has become more tame and conformist, in a nod to public opinion, especially on "sensitive" issues like Kashmir, nationalism and Pakistan, lest they be branded as anti-national. 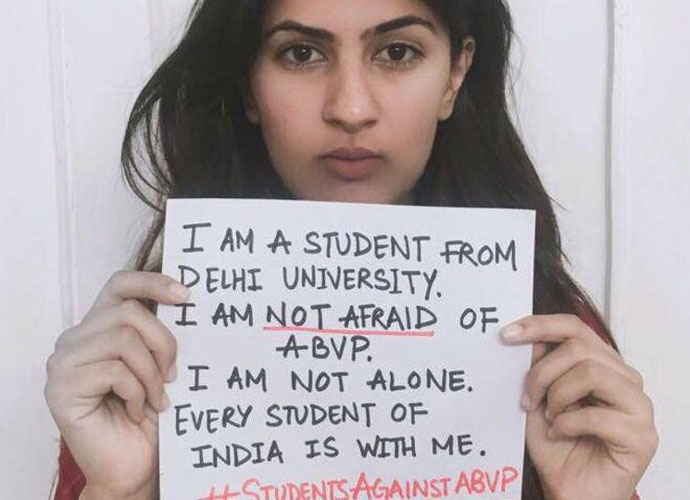 The modus operandi of this government has been to demonise dissenters rather than engaging with their arguments.

So they try to inject balance and lecture both sides in an incident when all of the dozens of people hospitalised, and detained, belong to one side. The news anchors speak of clashes, lament the politicisation of university campuses, and exhort more tolerance on all sides without outlining the fundamental danger at issue here - state-sanctioned hooliganism on campus.

In the wake of the surgical strikes, the Economist ran an article titled 'Indian media is more craven than Pakistan's'.

And then belatedly, as if consumed by guilt over their equivocation, they bestow stardom, and make icons of those, like Kanhaiya Kumar and Gurmehar Kaur, who speak of those concerns and fears which many of them share, but dare not clearly speak about.

It's not surprising, then, that compared with a relatively conformist media, the government sees universities, and their culture of dissent, as revolutionary ferment and "laboratories for separatist experiments".

The two institutions an ideologically populist regime most despises are the media and the university, because they keep them tethered to within an acceptable distance of truth. When the demonetisation move took place, and the PM promised the world, from an end to corruption to a transformed economy, it was journalists and academics who highlighted, more than anyone else, the varied ways in which the drive harmed the economy and the widespread disruption it wrought on lives and livelihoods.

In classic populist speak, the PM announced yesterday, that Harvard has been defeated by hard work. In effect, people knew better than compromised elites.

Brexiters tapped in the same vein when they insisted that "people in this country have had enough of experts", as did Donald Trump when he claimed that the murder rate in the US is highest in 45 years, because people felt so.(It is, in fact, the lowest).

As Modi invokes real, patriotic people to defend demonetisation, so do his ministers when they endorse hooliganism. In fact, the modus operandi of this government has been to demonise dissenters rather than engaging with their arguments.

That is precisely why Gurmehar Kaur so disconcerted them. It's easier to demonise Muslims and communists as a radical anti-India coalition of separatists and "urban Naxalites", than it is to demonise an idealistic, but unaffiliated, 20-year-old daughter of a soldier. Not that it stopped them from trying.

We are sliding towards becoming an illiberal democracy, where rule of law is routinely compromised at the altar of majoritarian sentiments. There is much evidence that ABVP has become a menace to free thought and expression in our universities.

If the government continues providing ideological and institutional cover to the ABVP, they will be seen as collaborators in the assaults on students and teachers.

Post your comment
#Ramjas, #ABVP
The views and opinions expressed in this article are those of the authors and do not necessarily reflect the official policy or position of DailyO.in or the India Today Group. The writers are solely responsible for any claims arising out of the contents of this article.