No, liberalism is not under any threat under Modi government

Left liberal intellectuals are spreading canards to get Congress back in power.

There has been a raging debate on the weakening of liberalism in India since the right wing party, Bharatiya Janata Party (BJP), ascended to power in 2014. While this may or may not be true, the fact is that the country's political discourse has undergone change during the last four years. The BJP, under the leadership of Prime Minister Narendra Modi, who is undoubtedly the country's most popular leader, has witnessed a spree of victories in Assembly elections with some losses in by-polls since 2014. Currently, the party has its chief ministers in 15 states and five other states are ruled by its allies, where it is a junior partner, which means the party has a presence in 20 out of 29 states.

The country has seen the governance of the centrist Congress party for more than 50 years in the course of over 70 years of independence. The long stint in power gave rise to a lobby of Congress-backed intellectuals in civil society and academia. The BJP and its supporters have always accused the Congress and Left liberal intellectuals of ignoring Indian culture in the writing of history and interpreting it through the prism of imperialist British historians.

BJP, an umbrella wing of Hindu conservatives as well as Hindu social democrats, is definitely trying to reshape history to give more space to Indian culture, especially the positive aspects that were brushed aside during the Congress era. This is the reason the liberal intellectuals are hell-bent on establishing that the BJP is trying to alter the "true" history of the country, calling it as a venture to turn India into a Hindu country "violating" her liberal image.

The rendition of 600 years of Islamic rule in the country has been a bone of contention between the left wing and the right leaning intellectuals. The history books, generally put together by the Leftists assisted by the Congress, record a positive image of the period describing dynasties, food, attire, music and architecture of the period. This infuriates the Rightists, who claim the interpretation ignores the large-scale forceful conversions, plundering of temple, imposition of taxes based on religious beliefs and persecution of the Hindus, including the Buddhists and the Jains, confirmed from chronicles of Muslim historians such as Al-Biruni, Amir Khusro, Ziauddin Barani, Wassaf etc.

Baburnama, memoirs of Babur, the founder of Mughal dynasty, which records the massacres of Hindus and destruction of their villages and towns by his army, was overlooked by the Left intellectuals to establish that India prospered under the Mughal rule.

Also, the right wing groups want to incorporate more knowledge of the Vedic civilisation in the history books highlighting the period's contribution to art, music, literature, medicine, astronomy and science.

This has led to stiff opposition from the Left intellectuals who are always inclined to view religion in a negative light, inspired by Karl Marx's writings. 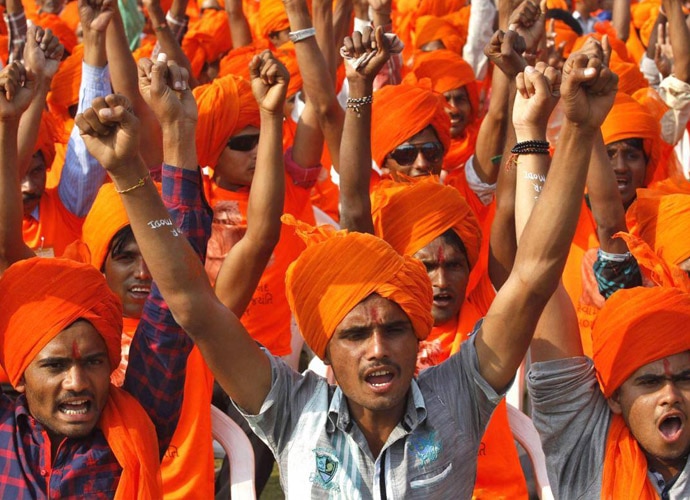 Every party and every individual should allow history to prosper without any ideological bias because the society stands to gain from such access to information and knowledge.

India's society and culture have always been Hindu in essence guided by the philosophy of Sanatan Dharma (an umbrella of many beliefs and traditions). Different sects of Hinduism such as Advaits, Vaishnavites, Shaivites, Shaktists, and Smarthists along with other faiths such as Animists, Ajivikas, Buddhists and Jains co-existed in the ancient Indian society.

The Hindu-dominated society gave shelter to Jews and Zoroastrians, who arrived at the coasts of the country seeking refugee, and also had no problems in adjusting with Islam and Christianity.

It is true that there has been a rise of communalism in India of late. However, this has not happened only because of the rise of fringe Hindu extremists as claimed by the liberals. The fact that Muslim fundamentalism has risen around the world has to be acknowledged too. So, holding BJP and its associates responsible is just propaganda of the liberals who want their caretaker Congress back in power.

Liberalism means tolerance for every opinion existing in the society. That is something hardly seen in Indian liberals suffering from Hinduphobia. Hinduism believes in the Vedic concept of "Vasudhaiva Kutumbakam", meaning the world is but one family. So, there is hardly any threat to liberal India from Hindu India as the Hindu community has always been accommodative towards diverse views and ways of life.

#Hindus, #Liberalism, #Narendra Modi, #BJP
The views and opinions expressed in this article are those of the authors and do not necessarily reflect the official policy or position of DailyO.in or the India Today Group. The writers are solely responsible for any claims arising out of the contents of this article.