Don’t block him. Heap criticism on him, spam his mentions with how awful his decisions are and question him politely.

A fascinating trend has been unleashed on Twitter today (September 7) where a clarion call has gone out to #BlockNarendraModi. The reasons, as far as I can gather, being:

1) He didn’t condemn incidents that "we" care about, so why care about him at all?

2) He follows random abusive people so block him to send a message.

3) He only has one-way communication. So what’s the point of him being on Twitter?

I disagree with the overall trend as well as the blocking. Although, I must add, I do get where it is coming from and why people are angry.

After reading this, people who despise Modi might be thinking, “OMG! That’s absolutely blissful! Why can’t we do that IRL?”

Sure. But hey, he’s our prime minister after all. Whether you like it or not. You might not agree with the decisions he has taken in the past, present and even in future (by default), but there’s no escaping the fact that he’s the leader of our country at this point of time.

I, on the other hand, am a bit selfish. He’s my prime minister and I don’t want to create a situation where he won’t read the criticism I heap on him and his government.

Let’s imagine our prime minister chilling in his residence in 7 Lok Kalyan Marg one lazy evening, sipping chai and eating theplas. (Okay, I know he works hard and is super-human, but please. Everyone has time for chai-thepla.) So while he’s chilling, he takes out his iPad and browses through his Twitter feed.

He reads the abuses people he follows are hurling at his detractors and feels… well, I can’t imagine what he feels but you get the point.

He sees world leaders wishing their people on festivals, offering condolences and whatnot. He sees ministers thanking him for doing their work. He sees pictures of his party MPs going around in their constituencies. He sees a picture of Megyn Kelly with an umbrella and fondly remembers the time she asked him if he’s on Twitter.

Then he moves on. He spots that #DemonetisationDisaster is trending. Curious about why people are calling it a disaster, he clicks on the trend and finds a whole loads of criticism, jokes, memes and articles written about it. And perhaps, just may be, he sees my tweets too.

I know what you’re thinking, “Really dude? Self-aggrandisation much? Why would he read your tweets of all people? He has much better things to do. Like run a country. And deposit Rs 15 lakh into every bank account… or not.”

But I like to believe (and really hope) that he does. And why not? There are millions of people mentioning him everyday, praising/cursing him on Twitter. They do it hoping, really, really hoping, that the PM might read their tweet. Even if there’s an infinitely small chance of it happening, there is a chance he’s reading your tweets right now.

I have spent a lot of time creating threads after threads on Twitter about how awful demonetisation was. Shared links, screenshots of official documents, connected it to laws they passed, interpreted it and worked on it quite a bit. I do feel that the leader of the country should be aware of the criticism people are heaping on his decisions. I count myself as being one of those "people".

On the other hand, if I block him, that would be rather counter-productive, no? I mean, I want to keep the possibility alive that the person who single-handedly wiped out 86 per cent of our currency, tried really hard to justify it (also continues to try hard) and inflicted general misery, is able to see me cursing his policy decisions. He should be able to see pictures I put up of haggard people standing in line waiting to withdraw their *own* money which he took away.

Same goes with praises. If he does a good thing, like how he handled the Doklam standoff, I want to have the option of telling him that I like his decision. And many other people who otherwise generally disagree with him did praise him for the move. I do want to have the option to tell him that Goods and Services Tax is a great idea and it might actually work (if he fixes the implementation).

The point I’m trying to make is that it’s a good thing to keep a channel of communication open with the prime minister of India. No matter how useless or pointless it may seem, just keep the option open.

Then again, I do get where people who are trending #BlockNarendraModi are coming from.

A tweet from the PM about an issue sends out a signal that he cares about it. He might not do anything about it (or might not be able to), but he, at the very least, acknowledged it publicly. Conversely, when he doesn’t tweet about something that a large number of people care about, it has the opposite effect.

But at the end of the day, it’s a one way communication.

Our PM hasn’t done a single press conference since he came to power. He hasn’t initiated dialogue with journalists or people except in sanitised, pre-approved environments. Or parts of his interviews are just edited out. That is quite worrisome. An elected leader should take direct (and non-pre-approved) questions from the public at times and should be expected to answer them. That hasn’t happened and must be criticised.

The issue of him following trolls on Twitter is another matter that is being talked about.

In our chai-thepla scenario, there is a chance he might be reading those responses. By following brain-dead-mud-headed-vomit-tongued-abusive infants, he’s creating a perception of endorsing their overall views. He might not agree with those views but when someone puts up a “proud to be followed by PM Modi” in their bio, it gives out the general impression that these loose-tongued disrespectful creatures have some sort of virtual blessing from the PM of India.

That being said, I think he should unfollow these uncouth, foul mouthed, impolite keyboard nazis whose parents have done a freakishly horrible job of raising them and then unleashed them onto the world.

But I’m not going to block him to make him do that. Because that would be counter-productive for me, personally. I know, it’s a long shot and I doubt if he cares about my opinion really, but there is always hope! He’s my prime minister, after all!

In my humble opinion, don’t block him. Heap criticism on him, spam his mentions with how awful his decisions are and question him. Politely. (Don't curse, because you are not a vile person ok? Look at me. You’re not a verbal faeces- throwing keyboard nazi.) You might be angry (I too go on Twitter rage sprees). You have every right to be angry at him. But make sure he gets a chance to read and "feel" your rage. Don’t take that glorious opportunity away from him.

Or, alternatively, do this: 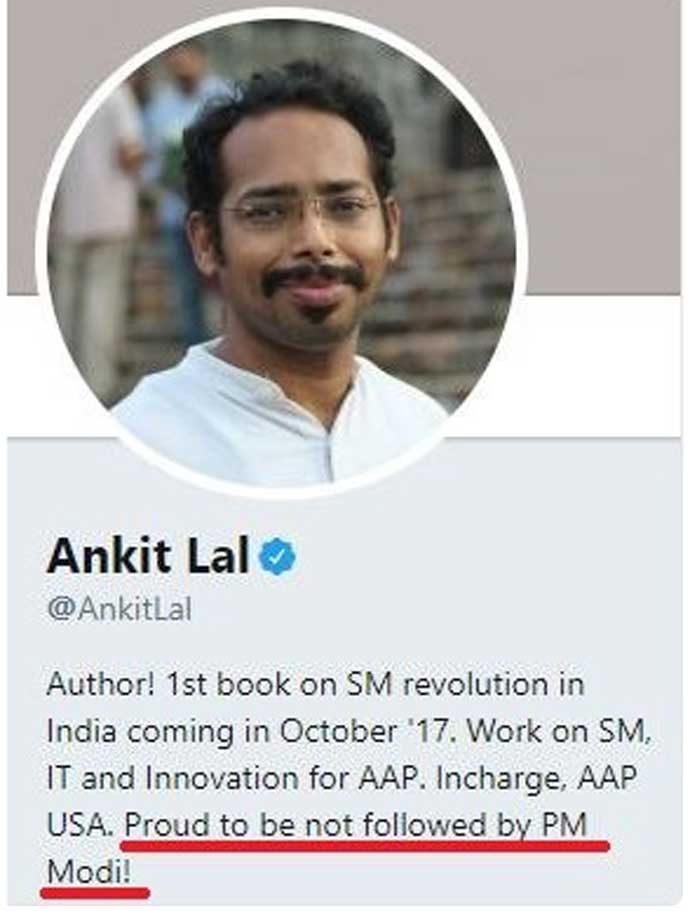 #Hindutva, #Gauri Lankesh, #Twitter Trolls, #Narendra Modi
The views and opinions expressed in this article are those of the authors and do not necessarily reflect the official policy or position of DailyO.in or the India Today Group. The writers are solely responsible for any claims arising out of the contents of this article.