Does India want to starve its infants?

How regressive we have become; now we need a campaign to 'normalize' breastfeeding in public, a perfectly normal act!

India has a weird notion of motherhood.

Cows are 'mothers' of the community, the country is 'mother'land, a goddess is a 'mother of the world' — but a human mother nursing her infant child is considered an indecent sight.

As a person growing up in middle-class India in the 1980s and 1990s, (whose mobility depended on public transport), I was very used to seeing young mothers lifting their saree pallu to feed their babies. Subsequently, as I started writing on gender issues and health as a journalist, I learnt the importance of breastfeeding babies — for the health of the child and the mother.

Therefore, I was aghast when a young mother in Delhi once told me that she did not want to breastfeed her baby as it would result in her breasts sagging and her husband not finding her “desirable” anymore. I was appalled at how she had reduced herself to being “desirable” for her husband, and her breasts were no more than sex objects to turn the husband on.

I then thought I had seen it all. Clearly not.

The universe had more in store for me.

My thinking has evolved since then (or so I believe). I try not to judge a woman because she wants to or does not want to breastfeed her baby. What I make sure of, however, is that I support and appreciate breastfeeding mothers and their angst. Therefore, reading Kolkata’s South City Mall’s response to Abhilasha DasAdhikari’s Facebook post angered me. Malayalam magazine — Grihalakshmi — that published a picture of a woman breastfeeding a baby as its cover photo that caused extensive outrage. (Photo: Facebookgrihalakshmimag)

Abhilasha DasAdhikari — a new mother — had gone shopping at South City Mall on November 28, 2018, and was looking for a place to feed her seven-month-old daughter. The baby got restless, and DasAdhikari was looking for a feeding room. When she could not find the room on the first and second floors of the mall, the washroom staff suggested she feed in the toilet. “I entered the toilet but felt like puking so left from there. I then started looking for a bench to breastfeed but alas there are so few benches and that too so uncomfortable. I thought of going inside INOX to feed but they didn’t allow me to enter. Finally, I thought of using a trial room and requested a shop which was totally empty to help me, and they did,” DasAdhikari reportedly said.

She was annoyed at the experience in the mall and gave the mall a poor review on its Facebook page for allegedly being asked to breastfeed the baby in the toilet, and the lack of feeding rooms in the mall. 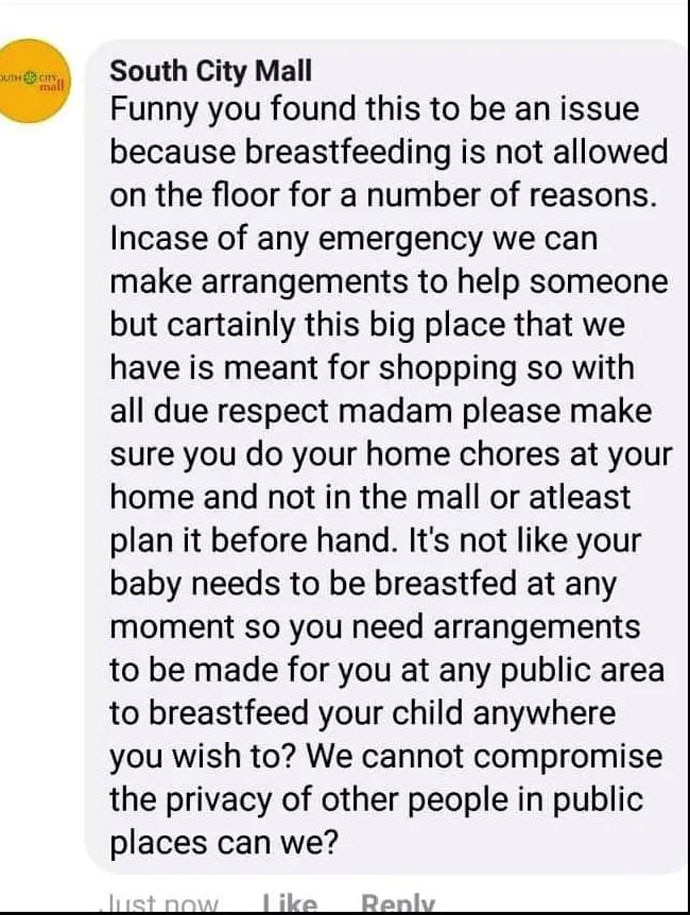 The screenshot of the rude response to Abhilasha DasAdhikari’s post by South City Mall’s social media executive, which has been removed following outrage on social media. (Photo: Facebook)

Predictably and justifiably, it led to outrage on social media.

As the indignation swelled, the mall issued an apology.

Too little. Too late.

There are multiple layers to this.

One, breastfeeding in public is considered “compromising on the privacy of the patrons” by the mall. Does that imply that we are sexualizing an activity like breastfeeding because it involves a woman’s breasts? Because if we do, then clearly we need to rethink all the education (or information) we have about sex and sexual anatomy. Breasts exist for a function that is not only limited to arouse a man or woman sexually. Each one of us has our fetish, and it could be breasts, feet, eyes, fingers or anything else. These organs, however, have other purposes. Breasts have a function to nourish the offspring in all mammals — and humans happen to be mammals.

If it still offends the mall’s apparently ultra-sexed sensibilities, then they should ensure that the nursing mother has a comfortable feeding room.

You see, even she is not very comfortable that the “patrons’” eyes ogle at her breasts while she is trying to soothe her hungry baby. Secondly, the social media post of the mall said “breastfeeding is not allowed on the floor for a number of reasons....this big place that we have is meant for shopping. So, with all due respect madam, please make sure you do your home chores at your home”.

By that logic, the mall should not have a food court, and should not have restaurants. Because, if feeding a baby is a “home chore”, then feeding your adult self should also be a “home chore” — with all due respect. And so should relieving yourself (therefore, no toilets). And if the baby, had to be fed in the toilet, as DasAdhikari reportedly was asked to by the mall staff, then, by extension of that logic, the food courts should be shifted to the mall’s toilet too — with all due respect.

Thirdly, the post also said that the mother should have “planned beforehand”. Unfortunately, a baby does not understand that. She demands food when she is hungry and chooses to relieve herself when she feels the pressure. If she could have planned her little tummy’s alarm schedule, then her 29-year-old mother would not have to deal with such an illogical post.

Breastfeeding Support for Indian Mothers (BSIM) — an online peer-to-peer support group — launched the 'Freedom to Nurse' awareness campaign on December 9, 2018, in Delhi to normalise breastfeeding in public spaces. This was done to sensitise people to the distress faced by Abhilasha DasAdhikari’s and thousands of new mothers like her. Unfortunately, if campaigns like this are required to “normalise” a very normal activity like breastfeeding, and stop shaming new mothers for nourishing the next generation, then we need to ponder where we are headed as a society.

#Freedom to breastfeed, #Healthy Diet, #Nursing mothers, #Public shaming
The views and opinions expressed in this article are those of the authors and do not necessarily reflect the official policy or position of DailyO.in or the India Today Group. The writers are solely responsible for any claims arising out of the contents of this article.