Brunei, don't be a pain in the ass! The rich little nation decides on stoning gay men to death. It should learn lessons from India

Love is love. And Brunei, with all its money and monarchy, should take a lesson from our desi handbook. We knew all about love and respect before the West invented the terms.

Let’s face it —  until the Supreme Court finally struck down Section 377, most of us weren’t exactly law-abiding citizens.

I’m not entirely sure why we’ve only seen this section through LGBTQ-tinted glasses —  but hey, I say with so much pride that we’re amongst a handful of countries in the world that now wave the Pride flag in a way that’s befittingly called happy and gay.

Brunei, however, a tiny Asian island nation — one of the richest countries in the world —  found itself in the spotlight for all the wrong reasons recently.

The world sat up and took notice at the possibility of homosexual men and women who could soon find themselves being stoned to death under a newly passed Sharia Law. For a nation where citizens pay no tax, where the ruling monarch is also the Prime Minister and his rule is absolute, there’s little the outside world can do about this complete violation of human rights. What can the outside world do about this complete violation of human rights? (Source: Reuters)

Britain, while twiddling its thumbs with Brexit, mildly suggested that Brunei might find itself out of the Commonwealth. But empty threat or not, that’s hardly going to do anything to a country that’s entirely self-governed, self-sufficient — and quite honestly, is at the right end of Oil and Gas Trade.

But the question is, why is Brunei being such a dick, or, in this case, a pain in the ass?

While we may have lost our way for a few hundred years under British rule, we’ve managed to stagger back onto a path that’s most certainly considered liberal. I feel so immensely proud of the fact that today, India is being looked up to for accepting people, regardless of sexuality.

Every time you find yourself complaining about some problem with Indian politics or some other petty rant about Bharat Mata, you must remember that way back in 2009, India began recognising Hijras as a third gender. Again, pretty forward thinking for a country that finds itself walking the thin line between tradition and being a global superpower. 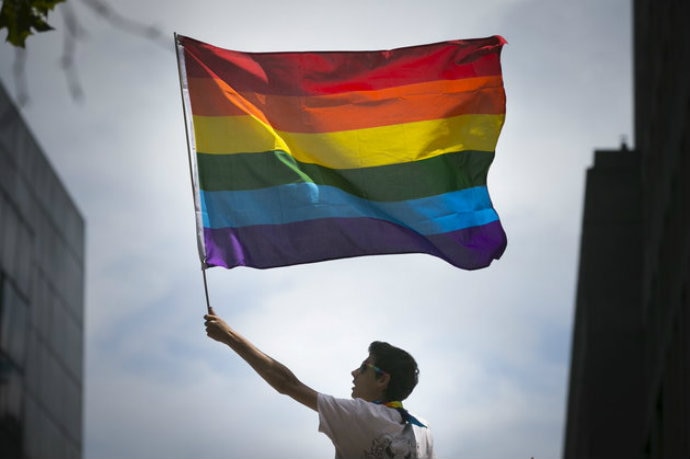 Can Brunei win the battle India won in 2018? (Source: Reuters)

FYI, less than 20 countries in the world recognise the third gender.

Yes, my desi friends, we are one of them.

I vacationed in Thailand for a fortnight a few months ago. In the midst of all the Ladyboys and the Gogo boys with shiny neon thongs, it was always fun to run into Indian men or couples at ping pong shows. Hindi remarks in a foreign land always stand out. And while we may have our own reasons for heading to Bangkok and Pattaya to relieve ourselves of some desi bhadaas with mindless massages and 'boom-booms' for 1,500 Thai Baht, it’s just an escape for us.

It’s not a life and death situation like the thousands of Russian gay men who find themselves going on Thai holidays because the Kremlin is likely to imprison them for life if they were doing this back home!

I know, this India pride seems odd, considering we’re past Republic Day and Independence Day is still a few months away, but that’s exactly it — sometimes, we need to look out of the window to realise how comfortable home is.

We need to talk about this BEFORE lives are lost

Brunei, with a population of just over 4 lakh people, hardly seems like a country that might want to divide itself into minority groups based on sexuality —  but all too soon, we could hear of gay men in that nation being stoned to death. Lesbians will be let off —  after 100 whip lashes.

Is there anything we can do from India to explain to the second longest ruling monarch in the world that what they’re doing is barbaric, primitive and just cruel?

We’re becoming the dossier for the world. From yoga and the Kamasutra to zero and Vedic maths, ancient India contributed tremendously to the outside world. With over 460 million Internet users, can't modern India raise its voice to show the world what it should be?

For every squabble between the bhakts and others, remember, we did win the battle which is why we can say “love is love.” And Brunei should take a lesson from our desi handbook.

They may have messed up as we once did.

But they can still fix this in time.

Also read: How to be an actor in a Netflix-Amazon age of openness

Post your comment
#Kamasutra, #Human Rights violation, #Gay stigma, #Pride parade
The views and opinions expressed in this article are those of the authors and do not necessarily reflect the official policy or position of DailyO.in or the India Today Group. The writers are solely responsible for any claims arising out of the contents of this article.